‘Most men fear getting laughed at or humiliated by a romantic prospect while women fear rape and death’. The above quoted line truly fits in the current picture of India where a rape is committed on an average of every 15 minutes, according to recently published official government crime data that is The National Crime Record Bureau (NCRB). Despite several government’s campaigns and programmes oriented such as “Beti Bachao, Beti Padhao” etc, with centralized theme of empowering girls, crime against women has been increasing with increasing rates day by day. Whether it is Nirbhaya from Delhi or Aishwarya from Hyderabad, every new rape case with different and heinous ways of assaulting shakes the nation. 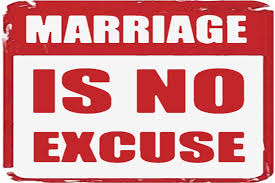 Section 375 of Indian Penal Code (IPC) states that a man is said to committed a “rape” who tries to have a sexual relationship with a woman without his consent or will with an exception stating that sexual relationship by a man with his wife won’t be considered as rape under this section. In 2013, the criminal law amendment act was passed which criminalize several sexual offences such as acid attacks, voyeurism and stalking and declared 20 year sentences for rape and the death penalty in extreme rape cases. But the above stated criminal law amendment act didn’t specified about marital rape as criminal offence. All though section 375 of IPC defines the act of rape but under the same section, the exception states that sexual inter-course by a man with his wife, the wife not being under age of 15, is not rape. Why? Does marriage means that a woman gives green signal for sex to her husband even without involving her consent and will? Or because of our rigid patriarchal society’s thinking, India’s large religions or suppressed women’s voices?
According to the statistics of India, 1 in 3 man tries and admit to be raping their wives, and not only this, one Indian woman is raped by her husband every three seconds and still India is one of the 36 countries that still hasn’t criminalized marital rape, just because our tradition says that marriage is most purest of all relations and cases involving marital rape will destroy the institution of marriage. But the fact and truth is that rape destroys marriages.

Article 14 of the Indian Constitution states, ’The State shall not deny any person’s equality before the law or the equal protection of the laws within the territory of India.’ But still Indian Criminal Law discriminates against female victims who have been raped by their own husbands. Also, the article 21 of the Indian Constitution states, ‘No person shall be denied of his life and personal liberty except according to the procedure established by law.’ Then why the Criminal Law of India does snatch the personal liberty and freedom of a woman in the marriage.
It is true that when IPC was drafted in somewhere 1860’s, and at that time Indian Laws were highly influenced by Britishers and English Laws. Also, at that time married women were not given separate and independent legal entity. But now time and thinking both have changed. With evolving times, Indian Laws now sees and gives both husband and wife as separate legal entity. Hence, the requirement of separate section of marital rape law is necessary.
In 2015, RIT Foundation filed a petition asking to close this loop hole and criminalized marital rape in India. But this petition filed has been postponed for 5 times till now. Even it is difficult to get hearing because of the conflicting ideas and thinking of judges.

Need of Marital Rape to be Criminalised:

Several people opposed this petitions which favoured marital rape as criminal offence on the ground of Indian cultures. In August 2019, former Chief Justice of India Mr. Deepak Mishra said that marital rape should not be criminalised in India as it would lead to chaos in family and will disturb our values. So basically this conveys that marital rape laws couldn’t work because of different traditions and customs? This means difference in opinions gives green signal to all Indian husbands to rape their wives because a good or ideal Indian wife will surely consent her husband. Right? Just because our nation has weak factors such as financial loop holes, illiteracy, inequality, poverty, vast diversity etc, this doesn’t gives a right to a husband to treat his wife like a puppet who will always move according to his directions and orders.

In the case of Nimeshbhai Bharatbhai vs. State of Gujarat[1], it was said that marital rape is in existence in India, a disgraceful offence that has scared the trust and confidence in the institution of marriage.

In the case of Justice K.S. Puttuswamy (Retd.) v. Union of India[2], the Supreme Court recognized the right to privacy as a fundamental right of all citizens and held that the right to privacy includes “decisional privacy reflected by an ability to make intimate decisions primarily consisting of one’s sexual or procreative nature and decisions in respect of intimate relations.” Forced sexual cohabitation is a violation of that fundamental right
A bench of acting Chief Justice Gita Mittal and C. Hari Shankar of the Delhi High Court says, ‘Marriage doesn’t means that the woman is all time ready, willing and consenting (for sex). The man will have to prove that she was a consenting party.’

Hence, Marital Rape has not been criminalised in India but it needs to be. Marital rape is an existing tool which is threatening the institution of marriage in the society. There are millions of women who are being raped by their husbands within the confining for walls of their homes. Insuring and making marital rape as criminalized act would make justice more accessible for all women, irrespective of marital status. It will convey a powerful signal that a woman always has the right to choose whether and with whom she has to have sexual relationships. Men in India are currently able to rape their wives with impunity. But this has to END as it will also give true and correct justice to article 14 and 21 of the Indian Constitution.