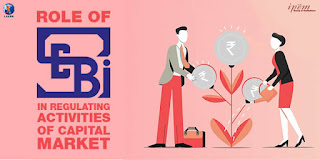 In the modern world, there is a voice from every other person to invest in the securities market or to become a part of share trading. Demat, mutual funds hold a great value in financing. However, most of the people are not aware of its functioning and thereby stumble or wave the idea of being a presentable shareholder. To have a clear picture of market surroundings, it is vital to perceive a good knowledge about it and the manner in which they get regulated. In this article, we will be emphasizing one of the important markets i.e. securities or capital market along with the board that is established for its regulation. This will focuses on the body that is vested with the responsibility of providing remedy and protection to the investor in case of happening of any fraud with him and a theoretical aspect of dealing in securities.

The word “market” refers to a place, physical or virtual, where interaction between buyer and seller takes place to interchange goods or services.[i] Equivalently, when the trading of securities, bonds, and currencies takes place, it forms a market called “financial market”.[ii] The broad classification of financial market is money market, capital market. Money market cast a market where short term instruments like Treasury Bills, Certificate of Deposits etc are involved, which carry less risk and good liquidity.[iii] It is regulated by the Reserve Bank of India (RBI) that is responsible for inflow and outflow of money with ensuring stability in India’s economy.

On the other hand, capital market refers to the market that transact in the long term instruments, say whose validity is more than a year. They are also called as securities market because of the trading in equity, debentures, derivatives etc.

A market that holds power to turmoil the entire economy. It is the pillar of financial system which can boost up the market and simultaneously, fails the market in terms of recession. That is why, securities or capital market is seems to be a market indulges with huge risk with lesser liquidity. It comprises the complex of institutions and mechanisms by which long term funds are pooled and made available to business, government and individuals.[iv]

Capital market plays a pivotal role in enhancing the structure of economy by assembling and providing funds to the enterprises, whether public or private. It become a channel of investment as it provides huge returns. It is essential for the betterment of economy. It facilitate buying and selling of securities like equity shares, preference shares, debentures, bonds, stocks etc. An effective capital market tends to improve and adopt good corporate governance principles within a company and hence, builds up a secure trading environment in the country. Thus, capital market is exceptionally important due to its extra-ordinary features.

The bifurcation of capital market is primary market and secondary market. When there is buying and selling of securities directly from the company without any intervention of third party, is called primary market. It is market where companies sells their securities for the very first time and therefore, it is also known as the “New issues market”. IPO i.e. Initial Public Offer is an instance of this market. On the other hand, secondary market refers to the market where trading of securities takes place over the counter market i.e. there is no direct involvement of the company. NYSE i.e. the New York Stock Exchange and Nasdaq are the best instances of the secondary market.[vi]

In order to have a secure and shielded environment in the working of capital market, there is a crucial need of absolute governance. That supervisory body established to regulate the capital market is Security and Exchange Board of India, a statutory body governed by SEBI Act of 1992.[vii]

On 12th April 1988, a board named as “The Securities and Exchange Board of India” was constituted as a non-statutory body via resolution passed by the Indian Government. Later, a separate Act was passed in the year 1992, through which SEBI was established as a “statutory body” governed by the provisions of SEBI Act, 1992 which came into enforce on 30th January 1992.[viii]It supervise the Indian securities market and along with it, governs the intermediaries by formulating separate regulations for them.

3.1 Incorporation & Composition of the Board

The Securities and Exchange Board of India is incorporated as a body corporate i.e. with all the features of a company. For instance, the board shall have perpetual succession, separate legal entity, able to sue and be sued in its name, able to acquire, hold as well as dispose of the property and capable to have contractual obligations in its name.[ix]

Furthermore, as per section 3(3) of the Act, the board’s head office shall be at the city of Bombay.

The composition of the board, as per the Act, shall be[x]:

The preamble of the Securities and Exchange Board of India Act, 1992 clearly illuminate the objectives for which the Board came into existence. The board is designed mainly to[xi]:

The board aims to bring transparency and accountability to the system of the securities industry with proper regulation of stock exchanges along with intermediaries. It prevents malpractices and exploitation of investors with a view of having a legitimate environment in shares trading. It makes a competitive as well as professional status in the capital market by exercising its control over it. Additionally, it develops a set of codes of conduct and norms to be followed by brokers, merchant bankers, share transfer agents, etc. Henceforth, the board has a great value in itself as it minimizes corporate fraud with the objective of fulfilling the interest of the investors.

3.3 What Functions are Performed by the Board?

As per section 11 of the SEBI Act, 1992, the board has a duty to preserve the interest of investors along with the development of security market by regulating it through various regulations and good governance practices. Moreover, the board,

This is the list of certain functions performed by the board for carrying out its objectives and effective control over the capital or stock market.

Additionally, in pursuance of such functions, the board is vested with the powers as vested to the court of civil nature under the Code of Civil Procedure, 1908. The board during the trial of a suit has power to[xxii]:

The board has power to hear cases brought before it as according to section 11 of the Securities and Exchange Board of India Act, 1992. Any person, however, aggrieved by the order passed by the Securities and Exchange Board of India shall have a remedy to brought an appeal before SAT i.e. Securities Appellate Tribunal within a period of 45 days from the date on which the copy of the said order of the board is met by the aggrieved party.[xxiii]Anyhow, the said appeal may be allowed by the appellate tribunal after the prescribed period if it is satisfied that the party was unable to approach the tribunal due to some sufficient cause. Furthernre, under section 15U of the Act, SAT shall have the same powers as vested to the civil court under CPC, 1908 like issuing summons, issuing commissions, examination of witnesses, taking evidences and other powers as may be prescribed.

Moreover, if any person is aggrieved by the order of SAT then he may file an appeal before the Supreme Court of India within a period of 60 days from the date on which the order of SAT is communicated to him.[xxiv]

From the above discussion, we must have learnt the importance of the Securities and Exchange Board of India in the governance strategy of capital or securities market. In the year of 1992, when liberalization, privatization and globalization took place together with the famous corporate fraud named as the Harshad Mehta, a need was felt for a strong body to regulate it and thus SEBI came into existence. The board with the purpose of protecting the investors’ interest came up with stable and substantive provisions. With the passing of time, as and when the urgency for felt due to happening of scams like Ketan Parekh, Satyam case, Rajat Gupta case etc, various amendments took place in the Act in addition to introduction of various new Regulations of SEBI.

Thereby, through different guidelines, regulations and policies made by SEBI, it helps and maintains transparency as well as accountability in the stock market and keep a track in the system for ensuring investor’s protection with fundamental growth of the market.

[xi]The Securities and Exchange Board of India Act, 1992, Preamble.