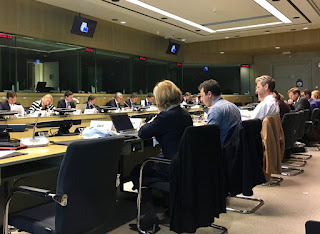 Though the international think tanks have been putting laborious efforts into formulating a workable structure for state responsibility, a firm legal backing is still not available in this spectrum. We live in a dynamic and ever-changing world. The task of specifying the territorial onus of various previously committed actions-both positive and negative-is the need of the hour. This becomes a question of concern when linked to the contemporary activities of nations, wherein dominant states are in constant hunger for acquiring foreign lands. The UN Charter is strictly against such practices but the relevant doctrine of peaceful co-existence fails to attain an administrative tone while nations already initiate the execution of its breach. The entire situation can only be understood once the existing conventions and accords are analyzed and their lacunae are recognized during the scrutiny. Furthermore, providing a pragmatic approach to the issue can help bridle states’ highly augmenting modus operandi of blame-shifting.

The doctrine of “Succession of States”

States, especially those that have gone through an expansion or disintegration in the recent past, contrive to work on perfunctory lines when there is a question of active initiative in the recognition of their responsibilities. The ambit of this issue expands to the treaties, policies, functional ethics, diplomatic ties, and pending sanctions whose existence are drowned in dubiousness, as the nations serving as primary parties in these situations do not want to burden themselves for the obvious sake of individual interests. To understand this, we take a simple example: there is a state X whose citizens or organs have committed an act that is wrongful on the international pedestal. Soon, X gets divided into two states, namely, Y and Z. Here, in case there is no specified clause mentioning the agreement of transfer of such liability, there is bound to be a hassle in establishing the liability of the two newly formed states. The doctrine of “succession of states” is widely used as part of the Public International Law to handle and untangle these conflicts.

As hinted earlier, the term “succession” does not only possess a negative connotation. It is not limited to change in crime and sanction liability, but extends its scope to treaties, debts, infrastructural developments, and a plethora of other good or bad resources. In case of dissolution into multiple states, the proportionality of division is taken into account while deciding on the issue of allocations. Here, the dilemma strikes when nations defy the process of accepting the negative consequences that fall into their basket during the discussion on distributions. This further leads to augmenting the call for a proper codified setup that can regulate the resources. To fulfil similar aims relating to the international legislation model, the International Law Commission came into existence and started working on the codification of the aforementioned field.

The International Law Commission (ILC)was established under the United Nations General Assembly in 1947. It aimed to work in the area of international law and provide relevant encouragement and codification for the progressive development of global law. An active overview has been provided by this organization, evident from the memorandum published by it about the succession doctrine and the need for its codification. However, the publication titled “Survey of International Law in Relation to the Work of Codification of the International Law Commission” also mentions a few soft spots towards the essential privity of the parties in conflict in such circumstances. For example, the document tries to evade precise formulation in matters of succession of states, citing subjectivity in sovereignty.

Sovereignty has had quite different modes of transfer in the journey of time. During the earlier phase of state formation, wars served as the prime medium for the transfer of sovereign power from one to the other. Now, new perspectives have unlocked fresh approaches in this process with five recognized modes of acquiring and losing territorial jurisdiction in place. These are occupation, prescription, accretion, cession, and annexation. A major impediment in the codification process of strict regulations regarding the minutiae of succession acts is this scattered perception and understanding about the legitimacy of sovereign transfer through the relative degree of force. Moreover, the audit process is bound to become a colossal chaos in this contemporary world, where every day brings a new global crisis with it. Lack of intercontinental political stability is an essential obstacle in this long-pending issue of formulating the right rules.

For decades, the entire situation has been seen as a disrupted political matter instead of being addressed as a legal issue of immediate concern. The world has never not been restless and volatile enough to understand its gravity and need from the law’s perspective. Therefore, ILC’s side has not had enough enthusiasm in preparing the framework.

Vienna Convention on Succession of States in respect of Treatiespresents rules and regulations that help in dealing with conflicts based on liability specification that gets highlighted post-unification or post-disintegration of territories. It lays down a structure with solutions which was adopted in 1978 but still has scope to improvise by inculcating ways out of contemporary problematic affairs. Here, when two or more states merge, the treaties of the individual former states continue to be followed with the original states. In a similar manner, when there is disintegration, the treaties continue to be in force with the states that were having diplomatic ties with the preceding unfragmented union.

In the Vienna Convention on Succession of States in respect of State Property, Archives and Debtsof 1983, the procedures and functions are laid down thoroughly for describing the method of allocation when resources linked to debts and properties are in the picture. In this case, the list is exhaustive in nature and covers features that might get a tag under these three aspects of the legal regime of the former nation. When it comes to debts, unification leads to the accumulation of the debt amount to the hilt. Dissolution of states, on the other hand, leads to the distribution of debts and archives responsibility in a proportional manner which is in accordance with the territorial division post-agreement. These terms are followed if there is no prior consensus regarding the aforementioned aspects. If there is one, then it shall serve as the main agreement, no matter how arbitrary the terms may be.

On one side, there is the “clean slate” principle wherein newly independent states are free from any kind of debt or diplomatic obligation. They are allowed to make a fresh start in the world by choosing their own ideology, responsibilities, nature of ties and criteria for governance. For instance, territorial regions that have been subjugated as a colony of a foreign nation have the choice of walking on the same lines as their preceding sovereigns or exploring world politics on their own with their new identity.

On the other hand, the principle of “continuity” is in place. Here, the new territories emerging out of dissolution or newly gained freedom choose to side with the pre-existing diplomatic relations and modus operandi while maintaining the status quo of their outlook in the global paradigm. They often present a replica of their previous identity with one of the major transformations being the change in their status of independence. In this, often the liabilities are also passed on to the state that is walking on the lines of the “continuity” principle. To give an example, we see how after the disintegration of the Union of Soviet Socialist Republics (USSR) in 1991, the Russian Federation apparently adopted the model of its predecessor and also took responsibility for the majority of the USSR’s acts.

Surprisingly, the contrary nature of the two aforementioned principles reflects more on the flaw of contradiction present in this system. The choices are based on a couple of principles without any detailed official explanation for different circumstances that could be referred to as a guiding force during times of conflict. The conventions try to provide solutions for the apportionment of properties and liabilities but the opposite principles break the chain of uniformity. However, the choice clause for disintegration also has a positive connotation to it that does not let it get dragged into an entirely bad light. As for the convention, it is seen as a relatively technical accord that evidently makes a few competent nations not sign and/or ratify it.

Status of the Doctrine in Contemporary Times

The current disparity in the adherence towards the doctrine of succession of states has led to political turmoil on a global level in contemporary times. Once the process of decolonization began worldwide, the need for constant amendments in the succession system started growing. Undoubtedly, the trauma of the two world wars played a massive role in delaying the whole process but at least after the completion of the Vienna conventions, the process to codify circumstance-based collective actions should have begun. This should have happened in two regimes primarily: One, where nations could not have used unethical methods to fulfil their goal of territorial annexation. For example, the Russia-Crimea conflict. Two, where nations would not have just inherited and acquired resources from a change in territorial dynamics but would have also accepted the consequences of the wrongful acts committed by their predecessors.

In the case of the ongoing Russia-Ukraine crisis, the coercive action of the Russian Federation by apparently sending “peacekeeping forces” to the two states of Ukraine -using which the nation actually began the military conflict- is first and foremost an unconventional way of succession by taking over the sovereignty of another established country. Also, Russia’s previous actions paint a future picture of how the ambitious nation shall neglect the state responsibility aspect of International law. Unfortunately, there is no crystal clear official expression that can prevent this from taking place.

The identification of rules related to the recognition of succession of states doctrine is left unheard due to lack of adequate codification in the system. An elaborate deliberation upon the issue of finding and filling the gaps in the system can help in quick disposal of succession-based crises and reduction in unethical attempts to do so. Once the paradigm is set on legal foundations rather than political ones, the world shall witness a sea change in affairs of relevance. Comprehensive codification, considering various circumstances that are present in the existing world order, can escalate the clarity level and scale down the present ambiguity that restrains world organizations to counter the conflicts with a firm backing in place.

This blog is authored by Prabhav Tripathi, a student of the Institute of Law, Nirma University.