Restitution is an act of restoring something back to its original position or state while conjugal rights are those rights of sexual intercourse between spouses inside the wedlock of marriage. Restitution of conjugal rights, therefore, refers to the restoration of the rights governing the sexual relations of a husband and wife. The main idea behind the restitution is to bring back the marital bliss between a husband and wife. 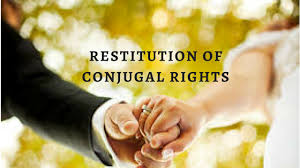 The restitution of conjugal rights can be a safeguard against divorce in one case and in the other, can actually be a catalyst towards the filing of a divorce. The provisions for restitution of conjugal rights have been provided for in the Hindu Marriage Act and the Special Marriage Act. If a spouse withdraws from the society of another without a reasonable cause then, the aggrieved party has a right to move to the District Court for the restitution of such rights. Once the Court believes that there is no falsity in the statements made by the aggrieved party, then a decree is passed for the same.

A PATHWAY FOR DIVORCE

Overall, the restitution of conjugal rights has resulted in a plethora of divorce cases. A lot of insecurities encompass such marriages. The aggrieved party especially the husband, still have all it takes to have their conjugal rights restored as they see nothing wrong in having forced sex as long as they are legally married, and yet this is nothing but the genesis of tension and fights within many homes. Once the aggrieved party succeeds in having the conjugal rights reinstated, it gives some form of control over the returning spouse or the one who would have deserted the other. Although marital rape is not a valid ground for divorce in the Indian context, it can, later on, be termed as cruelty to one’s partner in some other jurisdictions hence, a valid ground for divorce. In those countries where marital rape has been criminalized, a suit for divorce can be filed on the same even after the conjugal rights have been restored.

Restitution of conjugal rights gives birth to forced marriages as no prudent partner can leave the other without a genuine cause. If a partner forsakes the other, that literally conveys some failure in the marriage. Restitution then comes in between and desires the two parties to ensure that the marriage works again even after recurring efforts of trying. What the law seem to be unmindful of is, what it actually takes to withdraw from another spouse’s society, and moreover, adults are old enough not to keep on watering dead plants. The deserting spouse might be involved in the marital spheres, physically not mentally and emotionally and in the bid of trying to attain sexual pleasures, one partner might end up having voluntary intercourse with a third party and this will eventually lead to divorce.

If there is no response from the deserting partner within a year, then the aggrieved party can file for divorce. Thus, the conjugal rights become nothing but a merely formal way of encouraging divorce among partners. Once a partner leaves the other, that is significant enough of emotional checkout. One can choose not to respond to the call of the restitution of conjugal rights and wait for a year to lapse. All that the law is encouraging are forced relationships, attachments, and reunions among the married ones which are altogether wrong.

A HALLWAY TOWARDS MARITAL RESTORATION

Inasmuch as the restitution of conjugal rights has had some tremendous effects on marriages, some couples have actually had their happily ever after once their sexual rights were restored. Sexual intimacy helps to connect the partners more effectively and so, if this is the starting point, every other issue will fall into place. Husband and wife need not be unmindful of the genuine motive behind the restitution of their conjugal rights. The Law attempts to strengthen and mend their broken relationships and promote an environment in which happiness in a couple’s marriage becomes a priority. The concept behind restitution is to help the partners realize that problems come with any partner so the two have to settle their differences other than withdrawing from each other’s society. Restitution of conjugal rights gives the husband and wife a starting point in trying to revive their relationship again. Building up something with someone you are familiarized with, takes less time, and causes the couples to blend in more perfectly.

The time frame given before a decree for the restitution of conjugal rights is enforced helps the deserting partner to reconsider why they abandoned the other. This is not a matter of force but just a stance is taken to help reconcile the parties again. To those partners who are willing to make their marriages work, the restitution is of great use and as a matter of fact, the success of the restitution of conjugal rights largely depends upon the attitude of the deserting partner. The law does not compel any partner to reconsider their desertion but rather encourages the two to revisit their marriage vows in which they pledged to be separated by death and not abandoning each other regardless of the circumstances.

Restitution of conjugal rights openly means that the deserting partner is made to atone for his or her withdraw from the other and after all, it is a forced matter because what might seem reasonable to a partner, might be perceived differently before the eyes of the law which means disregarding the consequences it will have on a person. Though there are some positive outcomes, the restoration of sexual rights back in the marital home has done more harm than good. .Only that which is willing can be restored and the opposite is true. As long as marital rape is still acceptable, then the victims of such restitution will continue to groan. Forced marital relations, domestic violence, and encroachment of the right to life and personal liberty are the seeds of restituting the conjugal rights therefore to a larger extent, a pathway for divorce. Indeed you can force a horse to a river but you cannot force it to drink water….
Image Source
Author: Florence Ruzive, Law Student, Parul University