With the increasing rate of poverty and economic hardship, children as young as young seven are forced to indulge into various certain strenuous works. In India, every 11th child is working. Child labor is now used a measure to alleviate poverty and hunger without considering the effects that the child will have to bear. In this period filled with uncertainties, particularly in this pandemic where the masses are struggling to make ends meet, children have also become breadwinners. It is believed that the more the number of children one has, the more the labor and as a result, children have often fall victim to such. People nowadays live to survive and how the survival is done, is a different phenomenon altogether but in any case, the welfare of the child is to be given the top priority. 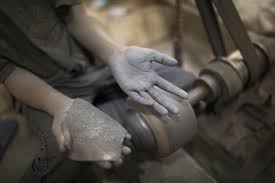 Child labor is the employment and involvement of children in any work which affects the growth and development of the child. Instead of children going to school, they are made to work in industries which also have serious repercussions on the growth of the country. The more the children are educated , the more the economy will change for the better but if these young minds are ruined , then even their own future will be at stake. It is highly recommended that the children go through the entire process of education as it can only through the educational processes that patience is effectively imparted to the children. Children who are prone to child labor often resort to faster means of living which might even cause them to indulge in acts like theft and even prostitution at such tender ages as they were taught how to make money and nothing else beyond that.

Sadly, the laws have been put in place to help abolish such acts but there exist some loopholes on the implementation part. As a result, that which is unacceptable is slowly becoming acceptable in the societies of today. Some of the companies are taking advantage of the pandemic to exploit the young children and because the children lack the knowledge on laws regarding child labor, they will always be in a disadvantageous position at the expense of such inconsiderate employers. In the cases where the child is being employed to work in the factories and industries , they will end up succumbing to certain health conditions including chest problems , asthma and coughing. In some of the factories, the children are not provided with protective clothing and the safety measures are not adhered to. If the basics and essentials like gloves and helmets are not being provided then what more the medical aid to ensure that the health of the children gets checked on a regular basis.

In the workplaces where both children and the elderly are working, children are likely to inherit the behaviors displayed by the other employees so much that if a child is continuously working in the same environment with a drug addict, they might end up doing the same and because children like to experiment so much, the influence might even diversify to the rest of the children at work and in the communities that they live in. In this way, the crime rate will also augment. Children who are susceptible to child labor are prone to have depression and anxiety as they grow. Some of the working conditions are too harsh for adults let alone the innocent children who have not yet developed any mechanisms to cope with depression. The verbal communication of such children is likely to get affected because of the mixed population at work. Child pregnancy is also another effect of child labor as the young girls often falls prey to sexual abuse and this only extends the chain of poverty. In most cases, the children get threatened in case they want to speak out and even the family members opt for silence because once the matter gets reported, that means their families would cease to survive. Child labor is a torture on its own and this is likely to result into domestic violence when the marriage clock ticks. Children are being shaped by the environments they grow in and no positive fruit is reaped from acts of child labor.

A problem at workplace is also a problem in the society at large. Some of the children are being tricked into child labor because their parents were so unfortunate as they could not get the chance to go to school and therefore education has no value in their lives and the chain is expected to flow in the same way. Other children are forced because most of the families they are coming from are living below the poverty line. It never is the choice of the child but the circumstances are a push factor behind child labor.

Child labor calls for collective efforts both at family and national levels. The value of education in a person’s life should be emphasized on and families should be targeted in this regard. Those parents sending their children to work at such tender age should be held responsible for the same as change should start from within for it to have a lasting out-turn. More and more strict laws should be enacted and effectively enforced by the law enforcement agencies to help abolish child labor. The future of a nation lies in the hands of these youngsters and therefore child labor can and should not be such a foundation if nations are to ensure a bright future ahead of them. The employers who are exploiting children should be punished and to each child should be given an opportunity for the development of their physical, mental and social well-being.

www. un. org The African Charter on the Rights and Welfare of the Child
Image Source
Author: Florence Ruzive