The important neighbor of India is – Asia’s fast emerging powerful country ‘China’ touching the borders of the north-eastern states of India, China is bigger than India in terms of area, These two countries are known as rivals to each other. 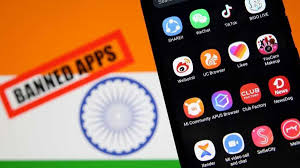 Although the relationship between India and China is historically and culturally thousands of years old, the two continued to have friendly relations even after independence. Even India, while cooperating with China at the international level, played an important role in getting it permanent membership in the United Nations. But when it comes to increasing political and social tension between the two countries, no matter how much strong the borders are, they cannot withstand the immense human pressure.

The Indian government took a major decision on 29 June 2020 between India and China in the dispute over the LAC. The centre has banned 59 mobile apps in the country including TikTok, Shareit and WeChat. The government has termed all these apps as to India’s sovereignty, integrity and security. The Ministry of Information and Technology has banned these apps, most of them from China. The Ministry has taken action using Section 69A of the Information Technology Act in this regard.

WHY THESE APPS ARE BANNED?

According to the circular of the Ministry of Electronics & IT, “From some time, 130 crore Indians were raising concerns about data security and privacy protection. It was found such concerns could also threaten the integrity, sovereignty and security of the country. The ministry had also received a large number of complaints from various sources, including several reports. Such reports suggested stealing data through some mobile apps on Android and iOS platforms and transmitting them to out-of-country servers without user permission.”

The National Intelligence law of China mandates and motivates private companies to work for the National Intelligence Agency and exchange information with them. Means data collected by Chinese apps from its users can be beneficial for the Chinese government. Many such proofs have also been found that the clip-board that we copy data on, such as maybe your bank’s OTP or a phone no., or personal information, which is accessible and readable to these apps. The leaks of such sensitive information can pose a great threat to our country as well as for the users who use these apps.

3. BAN ON CHINESE APPS, NOT FOR THE FIRST TIME

This is not for the first time when Chinese apps have been banned in India. In 2017, Alibaba’s UC browser came under scrutiny for allegedly leaking information of Indian users and that year, Indian Ministry of Defense classified 42 Chinese apps as spyware and ordered all its officers and armed personnel to uninstall them. However, some believe that the timing of the ban is not a coincidence, but it is a reaction to the events happening at the border.

IMPACT OF THE BAN

1. EXTENSIVE DAMAGE ON THE BELLIGERENT CHINA

In the last few months, China has turned increasingly belligerent under the leadership of President Xi Jinping. Not only with India but also fighting other neighbours like Australia, Philippines, Indonesia, Japan and Vietnam. Analysts say this is a move by the Chinese government to divert the attention of both its citizens and the world from the fact that China is the root cause of the devastating coronavirus. On June 15, 20 soldiers of the Indian Army were martyred in a bloody skirmish at the border, since then in the Ladakh area, India is seeing heightened tensions on China border. And not only this, later the Nepalese government, usually an ally, also treated India with hostility, with China tacitly egging the Himalayan kingdom on.

This step also reduced India’s dependence and now Indian startups and established companies will also benefit in gaining user base. Even, many Indians have been demanding a ban on Tik Tok for a long time because weak content moderation and thevulgarcontent shown on the platform was having a bad impact on children and adolescents.

China is very ambitious, even dreaming of becoming a 21st-century digital superpower. This ban may affect China’s most ambitious target. The decision of banning these apps amidst the ongoing tension between India and China, India is giving a clear message that now India will not be a victim of China’s nibble and negotiate policy and will review the criteria of engagement.

WHAT HAS CHINA’S RESPONSE BEEN TO THE BAN?

China said it suspected that the action taken by India may violate World Trade Organization (WTO) rules. “India’s measure selectively and discriminatorily aims at certain Chinese apps on ambiguous and far-fetched grounds, runs against fair and transparent procedure requirements, abuses national security exceptions and (is suspected of) violating WTO rules,” Ji Rong, a spokesman at the Chinese embassy in New Delhi, said in a statement.

CAN THE ORDER BE CHALLENGED?

Although it is unlikely that the companies concerned will take such a step immediately, either they or any affected person in India can challenge the restraining orders in the court. The courts will then decide whether the government has allegedly provided an adequate explanation as to the nexus for this and whether reasons such as national security and protection of strategic interests have been added by the government. And the court will also consider whether the ban is a proportionate and necessary step that has been taken given the fact.

This step taken by the government has aroused confidence in the hearts of the citizens of the country that if other countries do not respect India, try to do any harm to our country or citizens, then the government will not sit silent. And will give them a befitting reply when needed, As recently China got for the betrayal of trust.

This move of the Indian government has also received support from other countries like America and France. Although the move has been much appreciated at world level. But it is not free from cons. Because China will not sit silently on this but if we consider it, the positive side is more than the negative side. The move will give many Indians an opportunity to showcase their talent in app development, to become self-reliant and to help bring the country’s economy forward which has slowed down due to the epidemic. The objective of this initiative of India is to inspire Indians to become self-reliant and work with their skills.Therefore, with all these aspects we can wish for a better future for our country, which will be free from foreign interference in economic areas and will emerge as a more self-sufficient country.