Various events and activities are held on 6th February each year by the UN to raise awareness and to observe international day of Zero Tolerance for Female Genital Mutilation (FGM). This article aims to explain FGM, its prevalence and status globally and in India and the legal provisions that can be applied to the practice in India. 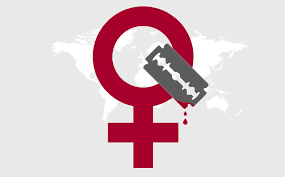 What is Female Genital Mutilation (FGM)?

WHO has classified it into four categories or types.

1. The partial or total removal of the clitoral glands (the external and visual par of the clitoris, which may be a sensitive a part of the feminine genitals), and/or the prepuce/clitoral hood (the fold of the skin surrounding the clitoral glands)
2. The partial or total removal of the clitoral glands and the labia minora (the inner fold of the Vulva), with or without removal of the labia majora (the outer fold of the skin of the Vulva).
3. Infibulation, this is often the narrowing of the vaginal opening through the creation of a covering seal. The seal is formed by cutting and repositioning the labium , or the labium , sometimes through stitching, with or without removal of the clitoral prepuce/clitoral hood and gland (Type I FGM).
4. This includes all the harmful procedures to the female genitalia for non-medical purposes e.g. pricking, piercing, incising, scraping and cauterizing the genital area[i].
Deinfibulation refers to the practice of cutting open the sealed vaginal opening of a female who has been infibulated, which is typically necessary for improving health and well-being also to permit intercourse or to facilitate childbirth[ii].

Where Did The Practice Originate?

There are a lot of theories regarding the origins of this practice. The most widely accepted theory is that it originated in ancient Egypt and then spread to East Africa, hence the term ‘pharaonic circumcision’ coined by the Sudanese. The earliest record of the custom was made by Strabo, the Greek geographer and historian who reported excision on Egyptian girls in 25BC. It is believed that the practice was occurring some centuries before this however, and was spread by dominant tribes and civilizations as a result of tribal, ethnic, and cultural allegiances[iii].

The Reason FGM is Practiced?

There are various reasons for the practice of FGM depending upon the region where the practice it observed. But mostly they are attributed to social, cultural, aesthetic, hygienic and religious factors. According to the United Nations Population Fund (UNFPA), the reasons for practicing FGM falls, generally, into the following five types[iv]:
Psychosexual reasons: FGM is administered so as to regulate women’s sexuality, which is sometimes said to be insatiable if parts of the genitalia, especially the clitoris, aren’t removed. It’s thought to make sure virginity before marriage and fidelity afterward, and to extend male pleasure.
Sociological and cultural reasons: FGM is seen as a part of a girl’s initiation into womanhood and as an intrinsic part of a community’s cultural heritage. Sometimes myths about female genitals (e.g., that an uncut clitoris will grow to the dimensions of a penis, or that FGM will enhance fertility or promote child survival) perpetuate the practice.
Hygiene and aesthetic reasons: In some communities, the external female genitals are considered dirty and ugly and are removed, ostensibly to market hygiene and aesthetic appeal.
Religious reasons: Although FGM isn’t endorsed by either Islam or by Christianity, supposed religious doctrine is usually used to justify the practice.
Socio-economic factors: In many communities, FGM is a prerequisite for marriage. Where women are largely dependent on men, economic necessity can be a major driver of the procedure. FGM sometimes is a prerequisite for the right to inherit. It may also be a major income source for practitioners.
No religion promotes or condones FGM. Although FGM is usually viewed as being connected to Islam, maybe because it’s practiced among many Muslim groups, not all Islamic groups practice FGM, and lots of non-Islamic groups do, including Christians, Ethopian, Jews and followers of certain traditional African religions. Therefore, it’s cultural instead of a practice related to religion.

Why is it Harmful?

FGM has significant repercussions for the sexual and reproductive health of females.
The effects of FGM depend on a number of factors, including the type performed, the expertise of the practitioner, the hygiene conditions under which it is performed, the amount of resistance and the general health condition of the girl/woman undergoing the procedure. Complications may occur in all types of FGM, but are most frequent with infibulation.
Immediate complications include severe pain, shock, haemorrhage, tetanus or infection, urine retention, ulceration of the genital region and injury to adjacent tissue, wound infection, urinary infection, fever, and septicemia. Haemorrhage and infection can be severe enough to cause death.
Long-term consequences include complications during childbirth, anaemia, the formation of cysts and abscesses, keloid scar formation, damage to the urethra resulting in urinary incontinence, dyspareunia (painful sexual intercourse), sexual dysfunction, hypersensitivity of the genital area and increased risk of HIV transmission, as well as psychological effects[v].

According to data from extensive representative surveys show that the practice of FGM is heavily concentrated in a handful of countries from the Atlantic coast to the Horn of Africa, in areas of the Middle East such as Iraq and Yemen and in some countries in Asia like Indonesia and the Maldives, with broad contrast in prevalence. The practice is almost ubiquitos in Somalia, Guinea and Djibouti, with levels around 90 per cent, while it affects no more than 1 per cent of adolescent girls in Cameroon, the Maldives and Uganda. In May 2020, Sudan passed a new law to outlaw FGM, where roughly 87% of girls undergo genital mutilation. FGM is banned in countries like the USA, UK, Australia and 27 African countries.

The Status in India

In India, FMG is prevalent amongst the approximately two million strong Bohra community. The vernacular word for FGM is KHAFZ or KATNA. According to a study, around 70-80% of Bohra women are subject to FGM. Approximately 33% of the ladies surveyed reported that FGM had negatively impacted their sexual life with many stating that they experienced painful urination, physical discomfort, difficulty walking, and bleeding.

Legal Status of the Practice in India

India does not yet have a specific law against FGM. Despite provisions of the Indian Penal Code (IPC) and the Protection of Children from Sexual Offences (POCSO) that could deal with FGM, the tradition has prevailed for decades. In May 2017, a PIL was filed in the Supreme Court of India seeking a ban on FGM in India and in 2018, the matter was referred to a five judge Constitution Bench.

FGM is an ancient and harmful practice with no benefits. It should be banned in India as it is not supported by any religion and is in violation of women’s Right to Life and Personal Liberty guaranteed by the Constitution of India.