Hart (1907-1992) was a Barrister, a professor and well known legal philosopher in England and in the world. Hart was said to be the leading philosopher in ‘the positivist camp’ who extensively wrote about the nature of law. His approach is grouped as “soft positivism” in which he rejects Austin’s command theory but holds on to the separability of law and moral thesis[1]. 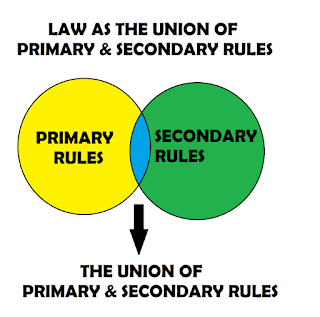 “The primary rules are those kinds of rules which is to govern the primitive society. These rules are not legislated or made rather they are used to evolve through the process of practice and acceptance”. Their validity has to be verified by checking whether they are accepted substantially by all members of the community or not.[2] In other words, primary rules no longer serve a modern society. A modern legal system must comprise more than this; it must also have to include what Hart called secondary rules, the function of which is exclusively addressed to the status of the primary rules.

When a society is in pre-legal stage (that means society is run only by the primary rules), it faces three kinds of problems which are as follows-
a) Uncertainty- Uncertainty means to whom the primary rules belong to. If doubts arose as to what the primary rules were, there would be no means of resolving the uncertainty. There would not be any procedure for determining what rules were (e.g. by asking guidance form officials or referring to some authoritative text).
b) Static- Primary rules are static in nature and not dynamic in nature because of the absence of central authority and also there is no introduction of law in the society. There would be no means of altering the rules according to changing circumstances. The rules would be static.
c) Inefficient- As there is no central authority, so who will enforce an act of an individual who did it in non-accordance with the optimum standard of conduct. There would be no means of settling a dispute as to whether a rule has been broken. (This is the most serious defect of all.)
All these defects can be rectified by supplementing primary rules by other rules of different kind, rules already referred to as “secondary rules”. “Hart said that when the secondary rules will emerge in the society, he was not concerned with that how and who will assist in its emergence. The main concern was that whether after the emergence of these secondary rules in the society, they will unite with the pre-existing rules or not?
Thus, the moment when all these three secondary rules emerge or exist in the pre-legal society, that marks the transition of a pre-legal society into a society with law and legal system. Three secondary rules come into a pre-legal society to address the pre-existing problems pertaining to primary rules.

There may be more than one way of deciding what the primary rules are. And if there is more than one way, there may be a means of resolving possible conflicts by having an order of superiority (e.g. a proclamation overriding judicial decisions). A secondary rule which enables one to know what the primary rules are referred to by Hart as a ‘rule of recognition’. If a society has the ‘rule of recognition’ that means it has a way of determining whether a particular law is valid or not.
Secondary rules will confer power on a particular person or a group of persons. It will address the problem of uncertainty. Whether a rule is of a particular community or not ? – According to Hart, this is decided in reference to constitution and statutes and precedents. Criteria of all these can be considered as rules of recognition.
“According to Hart, a rule of recognition may not be written or stated but it can be seen as accepted by the society”. We will identify our correct standard of conduct with reference to constitution, statutes, precedents and customary rules also.
When there will be a conflict between a rule identified by a custom and a rule identified by precedent, now which will be a valid one, hence prevail? – Hart says the rule indentified by precedent will prevail.
Simply this shows that one criteria is subordinate to the other one i.e., custom is a criteria but it is subordinate to the criteria called precedent. Now here custom can be called as ROR but it is subordinate to precedent.
The same will happen in the case of conflict between a primary rule identified by statues and a primary rule identified by precedent, the former will prevail. Hence this is the hierarchy of criteria of identification of ROR. These are the four sources of law which provide validity to the primary rules in question. Hierarchy is as follows-
(i) Constitution
(ii) Statutes
(iii) Precedent
(iv) Customs.
So validity of a ROR can be connected with “Supreme ROR”

The other defect (in society having only primary rules) that the rules are static can be remedied by having secondary rules that provide for ways in which the primary rules can be changed. Secondary rules of this kind, which are known as ‘Rules of Change’ may specify the persons who are to have power to alter the law, and lay down the procedure to be followed in order to do so.

The third defect mentioned above under can be remedied by having secondary rules which enable any individual to find out whether or not a primary rule has been broken. Such rules can lay down which authority will decide this (e.g. as a judge) and any procedure which should be followed. “conclusively, Hart’s analysis with respect to the primary and secondary rules provides a very useful framework for understanding the sources of law and also how we can distinguish valid laws from invalid laws without entering into its ‘subjective moral territory’. “According to Hart, the moment both these rules (primary rules and secondary rules) unite , the idea of law will born.”

This blog is authored by- Ms. Pankaj Rawal