The Legal System is the part of a country’s government which administers justice in accordance with the law. It apply the law, settle disputes, punish law-breakers, protects rights of individuals and fills loop holes in the law. The Legal system that we see today is the result of 1000 years legal evolution from divine law of the nature to the positive law that we see today. Since the beginning of human civilization judiciary, in some form, kept protecting the both person and property of the individuals; but then who will protect the Judiciary itself. 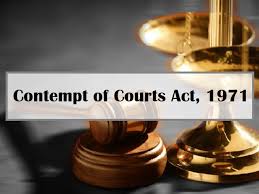 There the concept of ‘Contempt of Court’ has evolved, which seeks to protect the judicial institution and its members from motivated attacks and unwarranted criticism by punishing those who intends to lowers its authority. In the case of Attorney-General v. Times Newspapers Ltd., Lord Diplock[1] defined the term ‘Contempt of Court’ as a generic term descriptive of conduct in relation to particular proceeding in a court of law which tends or intents to tend to undermine that system or to inhibit citizens from availing themselves of it for the settlement of their disputes. Thus in simple terms the Contempt of Court can be defined as an offence of being disobedient to or disrespectful toward a court of law and its officers in the form of behaviour which oppose or defies the authority, justice and dignity of the court. In India Contempt of Court is defined under Section 2(a) of Contempt of Court Act, 1971 as, “Contempt of Court means civil contempt or criminal contempt”.

Origin of the concept

The concept of Contempt of court is as old as the Legal system. The origin of the concept can be seen in the medieval times when the monarchs transfer their royal power to court and at this time monarchs were believed to be the appointee of God and everyone is accountable to him. Thus at that time if someone disregards the authority of court, it meant to be the disregard of king which ultimately means the disregard of god itself and thus the person committing such disregard is punished for his act. In England it is principle of common law which seeks to protect the dignity of the king as a Judge and later to protect the dignity of the panel of judges who acted in the name of King. In India similar to other laws the law of contempt of court have also been borrowed from the Britain but it has not been absolutely taken from English laws rather it has other origins too. Reference to this concept can be seen in Arthashastra of Kautilya, he says that any person who insults or lowers the dignity of the King and his council or attempts to do so then the tongue of that person should be cut off.
With the adoption of Constitution of India, Supreme Court in India possessed the same power by the virtue of Article 129 and Article 142(2) of the Indian Constitution. However until the year 1952, there was no specific law for the Contempt of court in India, but then with the enactment of Contempt of Court Act, 1952 India has the established law for the purposes. To bring certain changes and to make the law of contempt more strong Shri B B Das Gupta introduced a bill in the Lok Sabha, after which the then government discerned the need for reforms in the existing law. So a special committee under the Chairmanship of H.N. Sanyal was established. The Sanyal Committee report brought the reforms in the act and provided what we today see as Contempt of Court Act, 1971.

1. Civil Contempt: Civil Contempt can be defined as the wilful disobedience to any judgment, order, decree, direction, writ or any other process of a court or wilful breach of an undertaking given to a court.[2] In simple terms where action of contemner is wilful, deliberate and in clear disregard of Court’s order, it amounts to civil contempt.[3]

Essentials of Contempt of court

An act to be treated as Contempt of court must fulfill certain essentials, which are as follow:
1. The court should make a valid order.
2. The order passed should be in the knowledge of the respondent and that he was able to perform the order.
3. In case of civil contempt there should be the willful disobedience of the order.
4. In case of criminal content there should be the publication of the matter which scandalizes, creates a prejudice or interferes with the administration of justice.

Limitations of the act