CONCEPT AND THE ORIGIN

The word Euthanasia comes from the Greek word ‘euthanos’ which literally means ‘easy death or painless death’. This word is being used in the 17th century. This word was described by Francis Bacon as a phenomenon of pleasant and certain quality sleep. These days the word usually refers to the means of accomplishing painless death. It is intentionally killing action of a dependent human being for his/her alleged benefit. Euthanasia refers to intentionally ending someone’s life, mainly to soothe or to relieve the sufferings. 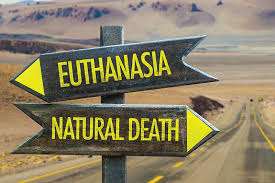 HIPPOCRATIC OATH AND PROHIBITION ON KILLING

It is a complex process which includes so many factors in it. It can be person’s mental health, Physical health, personal belief depression etc. that can lead to this. While doctors take the double-dealing oath, that they will never give deadly medicine to anyone if ask or suggested in any such situation. But, like abortion doctors do morally execute this under definite situations. Out of 196 countries, only 9 countries have legalized assisted death[i]. Euthanasia is the mostly controlled and managed by dangerous amounts of pain Killers or other medicines.
Euthanasia is being illegal in India but even then, there it is a tradition of forced Euthanasia in South India. It is killing of elderly, by their own family members. In this process, the person is given ample of oil bath and later made to drink glasses of coconut water which causes many health problems like kidney failure, high fever death in one day or two.

1. Active Euthanasia: Active euthanasia is positive and direct. the purpose of active euthanasia is for causing sudden or blast death. This process may include death-dealing injections and drugs overdose.
2. Passive Euthanasia: Passive Euthanasia is negative and indirect. These measures include the withdrawal of food, hydration (water) and oxygenation. The best example is of infanticides in United-States. The new born handicapped babies are withdrawal of their food and water who would otherwise have lived.
3. Voluntary Euthanasia: When euthanasia is committed with the self-willingness and liberated way. It is free from the direct and indirect pressure from others.
4. Non-Voluntary Euthanasia: In this type, Euthanasia is performed against the will of the person. For example, if the individuals have a disorder of consciousness, or a new-born baby. In these cases, permission granted by the caretakers and the family members.

Euthanasia is termed as illegal in so many countries. In India, its nature is punishable under the clause 1 of section 300 of IPC. Freedom to die have emerged from the idea of right to freedom, right to privacy and self-realisation. There are different issues which the countries has been facing:
1. There are many people who commit suicide everyday. Suicide is an offence but, it is not possible to punish an individual who are successful in committing the suicide. However, attempt to suicide is punishable under the section 309 of IPC. In many countries this is not punishable.
2. Some people have mental and physical disabilities, so they are not capable enough to consent their death.
3. There are people who shows their desires to commit suicide but they are feeble so they need help of others.

1. MR. NARAYAN AND IRAVATI LAVATE, MUMBAI
In this case there was an elderly couple who resided in Thakurdward, near Charni Road, Mumbai. They wrote a letter to honourable president for the permission for the Active Euthanasia. Mrs Lavate, a retired government school teacher and her husband was not suffering from any major medical problems. They were having the fear that, they will terminally fall ill and then, later will not be able to work for the society. The application contributes the subject of mercy killing in it.
2. ARUNA SHANBAUG CASE
Aruna Shanbaug, a nurse of the hospital at Mumbai’s King Edward Memorial Hospital (KEM). In the year 1973, her neck was constricted by the iron chains and sodomised by the sweeper. This attack left her badly-off of oxygen and port her in the vegetative state[ii]. She was kept in the KEM hospital for 37 years. After this matter she was kept alive by a feeding tube. This is so horrible case which has seek attention over world-wide. After all these Aruna’s friend Pinki Virani filed a petition claiming that ‘the continued living of Aruna is the violation of her right to live with dignity. Later, the Supreme Court rejected the plea. And later, issued the proper and permanent guidelines of legalizing passive euthanasia in India.

At various point of life its nature is considered as the pain-ending process but we cannot be considered it good for the people who are becoming victims of this process. From some people the condition can be in the serious phrase temporarily, that can later be improved and cured with time. people are against this ideology as it can flood the society in no time with awful values.

Euthanasia the topic which have debated and from various aspects. Euthanasia should be legalized as many physicians have the potential to relieve long lasting illnesses of the sufferers. This act can minimise the economic cost and provide the human resource to the patients who are suffering from curable diseases. We can see far; euthanasia actually represents the human deed as it helps to liberate people from pain and suffering. So, after these arguments’ euthanasia should be termed as an ethical practice but some believe it to for more than unethical practice. To those who have suffered terribly it is sad to keep the person alive only for the sake of saving his/her life.

[i] Assisted suicide, also known as assisted dying, is suicide undertaken with the help of another person. The term usually refers to physician-assisted suicide which is suicide that is assisted by a physician or other healthcare provider to end the sufferings.
[ii] vegetative state is when a person is awake but showing no signs of awareness and response. It is a disorder of consciousness in which patients with severe brain damage are in a state of partial arousal rather than true awareness of the mind and concious.

This blog is authored by Aditi Gupta, student at Indore Institute of Law