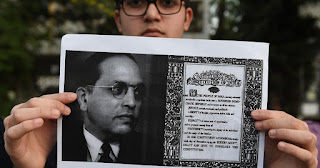 Constitutionalism could be defined under the doctrine that governs the legitimacy of government action, and it implies something far most important than the idea of legality that requires official conduct to be in accordance with pre-fixed legal rules. In other words, constitutionalism checks whether the act of a government is legitimate and whether officials conduct their public duties in accordance with laws pre-fixed/ pre-determined in advance.[1] The Constitution law is different from the Constitutionalism where by Constitution is the Written legal Doctrine to Govern the Nation in peaceful manner and the Constitutionalism is the faith in which the power must be in necessity to be in restrictive forms. Constitution of Indian Republic is not the product of a political revolution but of the research and deliberations of a body of eminent representatives of the people who sought to improve the existing system of administration.[2] After post-colonial war constitution were made with different outcomes but the promise of democratic transition and consolidation had marks as the birth of all of them, Constitutionalism is produce by anti-colonial movement and also inextricably tied of all the nationalist Projects which become the primary source of the political identities of citizenship and constitutional Patriotism.[3]

There are Relevant Features of Constitutionalism

Popular Sovereignty is defined by the Constitution that every Individual must possess the sovereignty by aspects of their Right and Duties. On clear thought that the all source of all sovereignty lies under the people of the Nation and No Corporate body, no individual may exercise any authority that does not expressly emanate from it. Even though there is a certain sovereign entity which is empowered to govern which is known as Pressure Groups, Moreover the concluding thing is all the sovereignty power come from the public. [4]

Separation of Powers is the three pillars of Constitution which given under various Article to determine the position and power which is Equally Divides that no one can overpower again another. The three pillars are Executive, Legislative and Judiciary they are must more powerful than the other but there function is same to give people justice and evaluate the law after time and make the verification of law by the committee members then passed it to the public.

The core of the rule of law consist of parliamentary aspects which also known for the maker of law, every person other than authority exercising governmental power or function must act by within the territory of law and must submit to and abide by the decision of common law courts both, as to the existence and extent of such authority.[5]

In the respect of all individual Right Engraved in the Constitution where all the Right give Equal benefit to every citizen of the Nations. Moreover if the fundamental Right got violated from any part then it may resolve by the court of law or being amended by the parliament after when they did not cross from the lexis nexus and from Rationality of law to give liberty with the equality. Example Section 377 where all the fundamental right got violated because all the right proposed for the Men, Women and Children not for the LGTBQ Communities.

The prime responsibility of ensuring peace and order is borne by the police. However, when the police discharge such duties, constitutionalism requires them to honor and respect the rights, dignity and freedoms of individuals including wrong-doers and persons suspected of offences. It is to be noted that a suspect has the right to be presumed innocent until proved guilty by the competent court.[6]
The Universal Declaration of Human Rights and the International Covenant on Civil and Political Rights prohibit torture, cruel, inhuman and degrading treatment and arbitrary arrest and/or detention. Similar provisions are incorporated in the FDRE constitution:-

Democracy is the vast terms which used in the judicial Democracy and parliamentary Democracy too although the third Executive is the Obideator of the democracy and by combining together it’s a makeover of the three pillar of our Constitution. However in the Territories of the Nation all the people possess the Democratic Right before the Birth and After the Death. A Democratic Constitution is the Indian Masterpiece which guarantees the fundamental Rights to the citizens and in procedure way by providing remedies by Court of Law.

One of the Major Democratic reviews is RTI in which Information to every citizen is like Transparency and accountability of Administration. The Great democratic power were in Information which connect the people and give chance to effect change and alleviate poverty in war we cannot imagine today. Our task to make that change real for those in need, wherever they may be must be with the information on our side, with knowledge a potential for all, the path to poverty can be reversed. With assured information, marginalized groups will be given their rightful voice and a powerful tool to scrutinize and engage with the development activities being directed at them.

They can access information about their development rights, as well as the projects and programs from which they are supposed to be benefiting. People use the law to ensure they receive proper entitlements and find out what the government is doing for them or for their locality.[7] However in the growing globalized state of participatory democracy in build the desire to know more as Example of PM Care Funds somehow it was neglected by the RTI to know about that but due to time when the critics arisen the Citizens wanted to Right to Know about PM Care Funds. This is the Right of a Democracy which shows that citizens wanted to Know Every Sphere of Situation which is being related to the society and their functions by the Evolution of time.

The judiciary is the Independent body as compare to other because there accountability were not visible so much, however sometime the Most Independent Results in misuse of the powers and privileges by the judges. The word ‘accountable’ has been defined as ‘responsible for your own decisions or actions and expected to explain them when you are asked’. Accountability is the sine qua non of democracy.[8] The effective theory of separation of power is not balance although their checks and accountability control is the misuse of the power vested with the each organs Relations. However there are other aspects of things which must be determine that for the citizen of India the judiciary do emphasis the prevention of the Crime which mostly on women’s and children’s although now the criteria got intervenes with the LGBTQ community as well by Decriminalized Section 377 IPC of Unnatural Offence which denotes the sign of Intercourse against the Nature but after the judgment of Navtej singh Johar v. UOI (2018) the supreme court valued the Democratic Rights of LGBTQ.

In Modern Democracy the Judiciary it may not only the guardian of the Constitution but also protector of the fundamental Right of Every Citizen if it belongs to the LGBTQ too. Judiciary respected all the nature of aspect of rule and Regulation with maintainability of peace in the society, Bryce observed;
“There is to be No better test of Government than the efficiency of it judicial system, which nearly touches the welfare and security of the citizens than his knowledge that can be rely on the prompt administration justice.” Similarly Garner put it; “A society without legislative organ is conceivable and indeed, fully developed legislative organ did not make their appearance in the life of the State until modern times, but a civilized state without judicial organ is hardly conceivable”.[9] By the interpretation of Constitution Marks guarantee of justice by social, economic, and political with the welfare of people by health which was guarantee by the International Laws.

In Summary, Constitutionalism forms is the institute that developed and balance the between rule of Law and Rule of Person which in today Nation provided on minimal guarantee for the justice. In the Relation of Democracy and Constitutionalism is the maintainability of the Rule of Law in which the Proper balance on justice and given the edge to the citizens of the Nation, it deems important to not only protected by the Judiciary but enforce and safeguard the constitution. The constitutionalism is the philosophy of the constitution which gives independent judiciary, Constitution review with the limitation upon the exercise of the power.
[1] Maru Bazezew, Constitutionalism, (2009)
[2] Madabhushi Sridhar, Evolution and Philosophy behind the Indian Constitution.
[3] Ujjwal Kumar Singh & Anupma Roy, B.R. Ambedkar and the ideas of constitutionalism and constitutional democracy.
[4] Bazezew, Supra 3
[5] P.K. Tripathi, Rule of Law, Democracy, and the Frontiers of judicial activism.
[6] Id.
[7] UN Special Rapporteur on Freedom of Expression, The Right to Information Strengthening democracy and development,(2004).
[8] Chetankumar T M & Anil H. Hawaldar, Judicial Accountability and good governance in a Democracy, (2013).
[9] Dr. Surya Narayan Misra, Constitutional Democracy, Judiciary and social justice in India.

This blog is authored by Gaurav Kumar Arya, student at School Of Law
Galgotias University