Historically, an imbalance in the power relations between men and women has created a misconception that women are weaker and defenseless than men. This has led to the domination of men over women. Over the years, women have been subjected to discrimination, torture and violence resulting in the negative impacts of their development and growth. Increase in the sexual offences against women has been acknowledged as the significant social and legal complications. The nation-wide outrage over the Delhi Gang rape case (Nirbhaya rape case) had prompted the need for strict and severe laws against sexual offences. The Government of India has reviewed and amended the former laws of offences against women by proposing the Criminal Law (Amendment) Act, 2013. This article seeks to analyze and compare the revisions established by the aforementioned Act with respect to Section 376 of the Indian Penal Code, 1860. The authors present and justify the benefits and consequences of the said Amendment across the country.

“We ask justice, we ask equality, we ask that all the civil and political rights that belong to citizens of the United States, be guaranteed to us and our daughters forever.”[1]
With the advent of Aryans, a period of strict laws against women was observed. The Law of Manu gained prominence and the notion of monogamy and chastity of women were introduced. According to Manu, the primary duty of a woman is towards her husband and to worship him as God. The predominant belief with respect to women was that “In childhood a woman must be subject to her father, in youth to her husband and when her lord is dead, to her sons. A woman must never be independent”[2].The practice of purdah was recognized as a custom which resulted in the seclusion of women in the society.[3] Over time, exclusion and illicit practices against women such as Sati, child marriage, devdasi symbolized the inferiority and position of women in the Indian society.

The dominance of males in the society has caused an increase in the violence against women. Women have been victim of different forms of violence such as social, psychological, physical, sexual etc. which impairs the integrity of a woman and results in grave repercussions.[4]Rape denotes the unlawful carnal knowledge of a woman by a man forcibly and against her will.[5]As per the provision of the Indian Penal Code, 1860, the offence of rape is accomplished by a man when he has sexual intercourse with a woman in the specified conditions. [6]

Firstly, if it is against her will.
Secondly, the woman did not consent to sexual act.
Thirdly, the consent of a woman for the sexual intercourse has been obtained by putting her in the fear of death or hurt.
Fourthly, the man knows that he is not her husband and the woman consented to the sexual intercourse because she believes that he is another man to whom she believes herself to be lawfully married.
Fifthly, her consent was acquired when she is unsound, intoxicated and she is unable to understand the nature and consequences of the act to which she is consenting.
Lastly, she is sixteen years of age and it is immaterial whether she consented to the sexual act or not. Moreover, penetration by man within the pudendum of the woman constitutes the offence of rape.

Even though the offence of rape is considered as the most heinous crime against women, most women considered this form of violence as their fate and fault or they deemed it to be unnecessary to report such an offence. Therefore due to illiteracy, fear of social stigma, fear of retaliation, mistrust in the legislation, fear of seclusion causes such offence to go unnoticed and unreported.[7]

Requirement of Amendment in Criminal Law

India is developing rapidly in terms of growth, economics, social, population, technology, infrastructure, etc. But it deprives in various aspects of equality and gender sensitization. Although the Constitution of India upholds the dignity of women by conferring special rights to them yet they have been constantly subjected to discrimination in various spheres such as education, employment, health, etc. Women have been the victims of rape, kidnapping, sexual harassment, eve-teasing, molestation, dowry related and other crimes which outrages their modesty.
The consent of a woman to the sexual intercourse was related to her personality of being the woman of easy virtue. Generally, rape cases related to a woman of easy virtue were dismissed. However, in the case of State of Maharashtra v. Madhukar[8] the Supreme Court of India held that even a woman of easy virtue is entitled to privacy and no one can invade her privacy against her wishes, as and when he likes. She is entitled to protect her person if there is an attempt to violate it against her wish. She is equally entitled to protection of law. Such judicial perspective was not enough and crime against women was nevertheless prevailing in the society.
The need for more stern and strict laws arose in the Mathura Rape case[9] where the Supreme Court of India rejected the case and stated that there were no outwards sign of rape on the body of the victim. This judgment of Supreme Court was heavily criticized and demanded a transformation of the criminal laws.
In the case of Saakshi vs. Union of India[10] a public interest litigation was admitted which stipulated to redefine the term “rape”. The Supreme Court of India directed the Law Commission to respond the specific issue and consequently the Law Commission furnished its review on the same in its report in 2000. It highlighted that the term rape should be replaced with “sexual assault” and all kinds of “penetration” should be included in the purview of Indian Penal Code, 1860[11]

Modifications in the Criminal law by Amendment of 2013

Due to modernization and changes in the mindset of the Indian society, the former Criminal laws prevalent in India appeared to be redundant. These laws failed to provide sanctions and punishments for acts such as acid attacks, voyeurism, stalking, disrobing and outraging the modesty of women, etc. The outrage of the Nirbhaya rape case[12] triggered the long standing demand for amendments in these obsolete criminal laws.
A committee known as the Justice J.S. Varma Committee[13] was framed to consider the recommendations in the amendment of the criminal laws. The tabular representation outlines some of the differences between the criminal laws prior and subsequent to the Criminal law (Amendment) Act, 2013 with respect to Section 376 of IPC 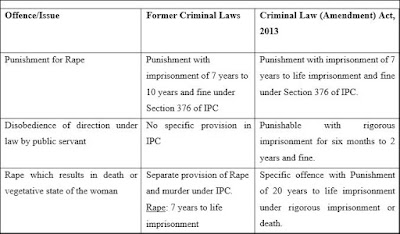 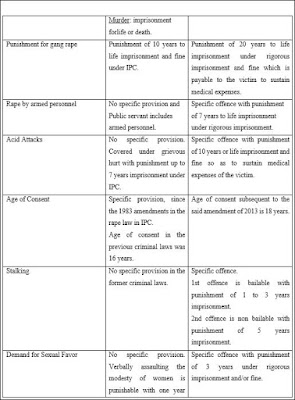 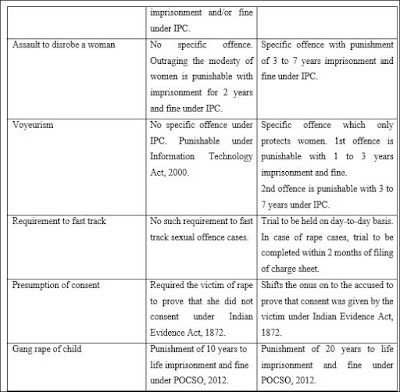 Apart from the abovementioned alterations in the Criminal law, the procedure of two fingers test in order to determine the offence of rape has been abolished. Such a test was conducted to ascertain the condition of hymen of a woman. The Supreme Court of India, in the case of Lillu @ Rajesh & Anr v. State Of Haryana[14] held that rape degrades and humiliates the victim and leaves behind a traumatic experience. Rape victim should not be re-traumatized as this two finger test violates their right to privacy, integrity and dignity both physically and mentally.
Empowerment of women refers to evolving them as more aware individuals, causing them to be politically active, economically productive and independent and rendering intelligent decisions in matters that affect them.[15] The enactment of 2013 Amendment has empowered women about their rights and safeguards them in affording prompt and effective justice.

Position of Women Subsequent to the Criminal Law (Amendment) Act, 2013

The changes and modifications in the Criminal law following the authorization of the Amendment Act of 2013 not only provide safety and protection of women but have also assisted in boosting the deteriorating position of women in society. After the aforementioned Amendment Act, the cases related to the offence of rape have speedy trial with the aid of fast track courts. The judiciary takes punitive actions against the offenders in the form of death penalty, life imprisonment, and imprisonment till the last breath of the person.
Depending upon the severity of the offence, the judiciary not only abides by the legislation of rape laws but also interprets the precedents and passes judgments in order provide adequate justice to the victims. In the case of Bachan Singh v. State Of Punjab[16] the Supreme Court held that death penalty should be awarded to the accused only in the rarest of rare case where the alternative option is foreclosed. The Supreme Court sentenced the person to life imprisonment in Mohinder Singh v. State of Punjab[17] due to the existence of rehabilitation and reformation of the accused. The alternative punishment would not meet the ends of justice and therefore awarded the accused imprisonment till his last breath in the case of Shraddananda v. State Of Karnataka[18]
The Criminal (Amendment) Act of 2013 has supported the achievement of higher conviction rates, eradication of patriarchal mindsets, and sensitivity towards victims by police and medical authorities. Overall severe penalties have been initiated for all those who physically, mentally, sexually and emotionally abuse and harass women.

Misuse of the Amended Criminal Laws by Females

Undoubtedly, the Criminal Law (Amendment) Act is a boon for the women in the Indian society. However, it has also established various instances where the provisions which are designed for the protection of women, are exploited by some women. The stipulations of amended criminal laws have become a source of blackmail and menace. The rape laws have been immensely cited as sources of revenge and retaliation against a rejecting male.[19] Due to the fact that the males are certainly suspected in the matters related to rape and other crimes against women, there are increased chances of false allegations of rape against them.

The main issue regarding the misuse of rape provisions is that it is also a violation of individual fundamentals rights guaranteed by the Constitution of India against whom these laws are used with mollified intentions.[20] Common motives that have been identified are that such laws are used by the females either to extort money or to avoid payment of financial debts to the males against whom they report such matters. In the case of Manoj Bajpai v. State[21] it was held that the allegation of the complainant must be quashed so as to prevent the misuse of criminal justice system for personal vengeance of a partner.
The Central Government further explained the exclusion of marital rape from the Criminal Law (Amendment) Act, 2013 by stating “there is a need for introspection and reflection to ensure that laws are not capable of being abused. If there are gaps in the law, it can lead to gross violation”[22]

Certainly, there was a dire necessity to bring changes in the archaic criminal laws and the implementation of the Criminal Law (Amendment) Act, 2013 has proved to provide effective and speedy justice to victims. However, there is little deterrence in the commission of offences against women. Although, policies have been introduced by the Government for the promotion and development of the women, yet a lot has to be achieved. Women are repeatedly facing crime against them at various places such as work place, public transport etc. There is a desperate need for improvement in the relationship between the public and police so as to initiate prompt reporting of such crimes. Moreover, the hype and incitement related to such offences created by media needs to be curbed in order to protect the interest of both the men and women. Further, exemplary consequences should be awarded as punitive actions against the perpetrator. The indispensable requirement is to create awareness and inculcate the moral values by incorporating such perception through gender sensitive programs, creating women-friendly environment at various places.

Image Source
This blog is authored by Nandini Agarwal