Obligation isn’t always operate by reason. What a person perceives obliged to do may not be the most reasonable choice of action. In fact, this option may even physically hurt them in some way. They appear to be the sturdy standardized statements in the language of morals. In legal sense obligation means the class of duties which are co-relative of rights in personam which means right of a particular people. Obligation is also contemplate as a proprietary right in personam which means a duty related to a right of other person. There are some rights which are created from the status of a person but they are not obligation under law because of unenforceability. For example, rights created by marriage. 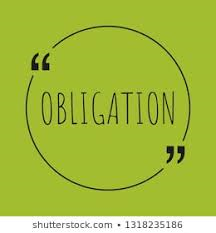 An obligation is a course of action that someone is needed to take, whether be it legal or moral. There are also obligations in other systematize contexts, such as obligations of protocol, social obligations, religious and possibly in terms of politics, where obligations are requirements which must be fulfilled. Every obligation has its four necessary elements, an active subject; a passive subject; the dispense; and the legal tie. Obligations are provision of a special kind. When we think about moral obligations and their directional structure, this requires the obligations that we have to other people. It is something by which a person is bound or obliged to do certain things, and which arises out of a sense of duty or results from custom and law, etc. Something that is done or it is to be done for such a reasons to fulfill one’s obligations. It can be a binding promise, contract, sense of duties, etc.

Obligations are an important feature of personal finance. Every budget should first include all financial obligations for which the individual is responsible over its given time period. The Financial Obligation Ratio, a quarterly figure released by the Federal Reserve Board that estimates the ratio of household debt payments to disposable income, is a useful benchmark for the individual budgets. Assessing obligations carefully is especially necessary for retirement planning. When planning over longer periods of time such as this, the individual budgeter must consider more long-term obligations, like interest rates on mortgage payments that have yet to be incurred. The Commission has the power to vary or cancel or suspend a person’s pension or payment. If an obligation has been imposed on a person under the VEA, and events occur that a result in a reduction in the person’s pension or payment, or a loss of eligibility for the pension or paymnet, the legislation involves certain actions to be taken automatically. Whether the person has or has not met his or her obligations under s54 of the VEA determines the date that this action is taken, i.e., the date of effect for:

1.) A disparity to the rate of a person’s pension,

2.) The suspension, cancellation of a payment, or

3.) The supplying or withdrawal of fringe benefits or treatment benefits.

The issue of political obligation is the problem of establishing an obligation within the moral deontic realm regarding the legal deontic realm, a moral obligation to obey the law. Many offer the voluntarist account, that the moral obligation is build on what is in effect a promise. Others think that moral obligations, and a fortiori political obligation, are all tied to encouraging the overall good. Still others follow Socrates in thinking we owe an obligation of appreciation to the state for stopping harms and facilitating our good. Some have argued, however, that the whole problem is illusory because “it is the part of the concept, the meaning of ‘law,’ that which to whom it is applicable are obligated to obey it”. “U.S. citizen” means “every person obligated to comply with U.S. laws.” Obligations are in effect parts of ordinary notions explaining our positions and the roles. The seemingly deep question of whether the U.S. citizens is “really” obligated to follow U.S. laws either betrays a uncertainty about what “U.S. citizen” means or takes the language “on holiday” which is, uses terms such as obligation and law outside of the contexts in which they have a meaning.

To have a certain obligation just is to occupy a certain role, there seems to be a meaningful question about the normative status of that role and the practices that create it a question of whether one ought to occupy that role, and moreover whether its obligations are genuinely binding. A defender of such obligations has to deny that there is any question of what one is genuinely obligated to do beyond what is laid down by one’s social status.

There are actions one would rather die than perform, or at least things the doing of which would be as good as of dying. But combining the idea that death is a loss of identity with the idea that everybody has a multiplicity of identities tied to various positions and roles yields the idea that we might die as an P, where P names some role or position we occupy. Thus, to be a parent requires the one to pursue the care of one’s child. To stop this pursuit is just to give up that practical identity and hence to die as a parent. The necessity of parental obligation is thus tied to the determination of one’s identity as a parent. In particular, our deepest identity, an identity it is out of question for us rationally to lose or throw off is our identity as a reflective rational agent. This identity argues, is constituted by a requirement to respect the reflective agency in oneself and others. Failures of respect are in the way moral deaths, ways of giving up one’s identity as a rational agent. This explains the special grip or authority of moral obligation.

Obligation must be used to refer to the bond binding a debtor to a creditor, and to the duty or duties to which such a bond gives rise. Its use must be restricted to the law of obligations; outside the law of obligations, the more general term ‘duty’ can also be used. Concept of obligation is co-related with the concepts of liability. There is always a right of one person over the other person who is duty bound to do or not to do anything in opposition to such person. Obligation cannot be equalized with liability as there is huge difference. Obligation is a proprietary right in personam but liability is a duty of wrongdoer to compensate to the sufferer.

It is very necessary to mention that there can be no right without a duty. The concept of obligation covers up the both right and the duty from the legal point of view. Obligation is like a legal tie which bound two persons for the benefit of each other for a particular action not in all favours. It can also be called as law of everyday life. If there is no such concept of obligation situation like chaos may occur in our society.  From the legal point of view it is very necessary to bound people to perform their part of duties towards the other and on the other hand the other person enjoys right over former.

This blog is authored by- Shreya Sharma