Aadhar is India’s National Identity project for which a new agency known as the Unique Identification Authority of India (UIDAI) was formulated. In an Aadhar, the biometric data such as fingerprints scan, eye-retina scan, a facial scan of Indian residents is collected, recorded, and stored. The residents are then issued a twelve digit identification number. The objective of introducing the scheme of Aadhar was to make public delivery service more efficient and curb corruption. 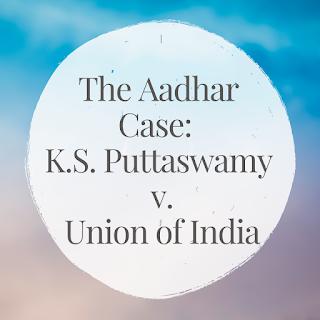 The drawback of making Aadhar a compulsion

The Government of India collected and used all the data of Aadhar for different purposes. Later the Government of India mandated the Aadhar for many welfare schemes such as Public Distribution System, Mid Day Meals, MGNREGA (The Mahatma Gandhi National Rural Employment Guarantee), etc. As soon as the people are aware of the fact that the schemes have mandated Aadhar they oppose the scheme as the collection of biometric data and making Aadahar a compulsion is violative of the Right to Privacy which is a fundamental right guaranteed under the Constitution of India, 1949. The Government further mandated the Aadhar for the opening of Bank a/c, admission in school, and even filing of income tax returns. Thus, it was stated that an individual’s Aadhar will be linked to his pan card and mobile number. Then, the income tax department will be able to access and track the account statement, expenses, and all other details with one click.

Conflict of interest on Aadhar between government and general public

The Aadhar consisted of biometric which included fingerprint scan, retina scan, and facial scan. This data was collected by the Indian Government and stored at a central server. If such data is leaked there are high chances of it getting misused.
Initially, if the policemen wanted to search one’s house or get certain proofs then they have to get a warrant, follow protocols and procedures, and even collect other required documents. But in today’s fast modern world, technology is so rapidly moving that the central agency can track one’s location, account statement, and conversation at one click. Thus, the right to privacy is an important fundamental right.

It is also known as the Aadhar Case and is also one of the lengthiest and the longest case in the history of Indian Courts.

For the first part, Justice K.S. Puttaswamy stated that the Government of India has stored all the biometric data of the general public in a central server but no safety measures have been taken to secure the data. Moreover, any private entity can use this data for authentication. Further, it has not been specified that for what purposes shall government use this data. Additionally, all the welfare schemes introduced by the Government of India are themselves a fundamental right and thus, the benefits of those schemes cannot be curbed under any circumstances.

For the second part, it was stated that the judgement delivered in the MP Sharma case and Kharak Singh case are erroneous. It was also stated that the foundation of the Right to Privacy can be found in Article 14, Article 19, Article 20, Article 21, and Article 25 of the Constitution of India, 1949. Moreover, many international conventions consider the right to privacy as an important fundamental right. But the then-Attorney General opposed this view and stated that “There is no such concept of Right to Privacy in India” and constitutional framers deliberately did not include such a right in our constitution.

For the first part, on 26th September 2018, a bench of 5 judges held that the Aadhar Act has constitutional validity, and providing demographic or biometric data is not violative of any fundamental right. This bench also deemed some parts of the Aadhar Act as unconstitutional such as Section 57, Section 33(1), Section 33(2), Section 47, and Section 2(d). These provisions were either struck down for reframed.
For the second part, the Supreme Court delivered a landmark judgement by over-ruling the judgement of MP Sharma case and Kharak Singh case and held that Right to Privacy is a fundamental right and is protected under the Constitution of India, 1949.

Hence, the story behind the Aadhaar Case is that in 2011, the Government of India initiated a new identity document called as Aadhaar card for which established a new agency, the Unique Identification Authority of India (UIDAI), to issue the card. For the application of the card, a resident must submit the scan of their fingerprints and retina. All the data are stored in a centralized database.
Subsequently, the government made Aadhaar mandatory for several welfare schemes such as subsidised food under the Public Distribution System, Mid-day meal scheme and Mahatma Gandhi Rural Employment Guarantee Scheme etc.
That being said, this Aadhaar scheme was challenged by the retired judge of Karnataka High Court K.S. Puttaswamy before the SC. Therefore, the primary question to be considered by the Apex Court was whether the provisions of the Act were contrary to the right to privacy which has been established as a fundamental right sometime before.