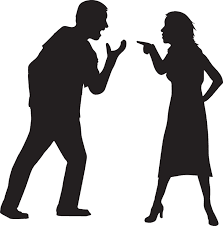 According to research in India, all the domestic abuses are done with females/wives. Domestic abuse is a type of cruelty that is done by a husband or his family on women (wife/daughter-in-law). Cruelty in the way of physical torture, mental torture, emotional torture that the women will not be able to handle anymore and will result in suicide or petition for divorce. In India every year 300 women file a report against their husband or his family for torturing them.
Most of the cases are in the demand of dowry, where a husband or his family tortures the woman for dowry which can also result in her death. Spousal abuse is not only because of dowry it can be for any reason like where a husband or his family wanted a boy child and women give birth to a girl child, under these circumstances, I have few words to say, but this also is not up to women or anyone, no one can decide the gender of the baby while conceiving a baby, you can not predict until you get tested for the same which is illegal you can not try for gender revelation test because due to this most of the family torture women to abort the baby or give her such things which will result in a miscarriage of women. This is a type of domestic violence and it is illegal to do so. Even you can not abort a child after 5/6 months of pregnancy without a valid reason. There are so many cases where women abused by a husband or his family.
Different type of spousal abuse are:-
1. Physical Abuse
2. Sexual Abuse
3. Emotional Abuse or Verbal Abuse
4. Economic Abuse

It is a kind of abuse where a spouse abuses his wife physically, when a man is aggressive in nature or say psycho one then it can result in any type of torture. Physical abuse is a kind of physical torture where a husband with use of something (like a knife, bat, stick, etc.) or without the use of these things with a slap or blow torture his wife for any reason whether it is for a boy child/psychic nature/aggressive nature/ or many more reasons like if he has extramarital affair with other women and he doesn’t want to spread this news and on the other hand wanted to get rid of his wife or say for dowry demand, in the affection of drugs, etc. you can identify a woman who is going through with this kind of tortures because you can see bruises on her body or say marks on her body which can only be resulted as brutal torture by someone. It can result in er death, or she can also commit suicide because most of the women don’t have enough courage to tell anyone in society.

Sexual abuse is a kind of torture of someone sexually. Where a husband torture his wife sexually this can include marital rape which is the biggest issue nowadays. It is illegal in nature. Husband always thinks that he is a dominating member in the relationship, he is married to her and he has all the rights to make physical intercourses or say physical relation with his wife. But it is not correct, whether you married or not there should be a consent of women is considered in making physical relation with her. Due to the marital status, it is considered marital rape, where a husband forcefully makes physical relations with her wife without her consent. Another example of this is when a husband gives his wife to someone for making physical relations with another guy without er consent it is illegal to work and sexual abuse.

Economic abuse is a kind of abuse where a husband abuses her wife by confining her into the house and restrain her to go out and where a husband doesn’t give food or living needs to her wife and her child mostly girl child. It can result in malnutrition for both children and women. And can be result in the death of them. These are some kinds of spousal abuse which are used by the husband on her wife for many reasons.

A. There are several cases registered where a spouse abuses his wife for dowry, under which a husband torture his wife for dowry (demand of money) and when a wife disagrees or say is not able to provide him with sufficient dowry he becomes aggressive and tortures her in any way until she doesn’t fulfill his needs even the husband and his family too try to kill her. Whenever there is a death of women occurs by fire or any such serious way within the 7 years of her marriage it is generally considered as dowry death which is prohibited by law.

B. Another cause of abuse, where a husband miss treat his wife just because he wanted a boy child and she gave birth to the girl child. There is a mentality of most of the citizens in our country that there should be a boy child in a family whenever someone get married the society or even family members wanted a baby boy because they believe only a son can continue their vansh, not a girl. Due to which so many women get abused by husband for the same.

C. Some of the husbands are psycho in nature or say they have a problem of trust which may result in cruelty or abuse. Some of the men have serious trust issues that they started following his wife everywhere even they stalk her in every possible way which will affect their married life. Due to this if a woman is normally talking to someone husband gets aggressive and tortured her which is another kind of spousal abuse.

D. Some reasons are where men have extramarital affair and he wanted to leave the wife by laming her or say by verbally announce in the society that she is the one who cheated him and that’s why he is leaving her just to save his image in the society. Wich will result in the defamation and abuse of women. Abuse in the sense that they even try to kill or torture her to that extent which will result in her death.

E. Religious factor is where women get abused in the name of religion like in some of the villages there is still a religion of sati pratha where women get burned alive if their husband died before her.
HOW TO KNOW HE IS ABUSIVE

Let’s see now how to analyze wether he is abusive or not there are some ways to identify:-

i. Abusers want commitment very quickly they don’t want to delay in any type of thing whether taking decisions or whether wanting to know something from you.
ii. He uses abusive words frequently and doesn’t have control over his exes and if happens investigate further. If they try to blame you instead and false claims just don’t take another chance.
iii. In a relationship we all need equal support and respect if he doesn’t trust you he will never respect you which may be result in further abuse. He started maliciously treat you around others and no man would ever do that if he loves you.
iv. He wanted to dominate you, he started treated you like you are his slave and he is the boss of your life.
v. Try to slap you and ever physically abuse you, etc.

Before getting married to someone be sure to have full information about him like his nature, behavior, status in society, is he ever get abused in his childhood because most of the 50 % abuser has a history of childhood abuse, etc. hence, a person is only earnt these things from his parents one should never torture women respect her if you want her in your life.

IMPACT OF SPOUSAL ABUSE ON A WOMEN

The impact of spousal abuse on women is worst to the extent you never know. One should always respect a woman because she is the one who always makes a house into a home and even men have their mother or sister how will he feel if someone does the same to them. The impact of abuses on women is so bad that she will become so depressed that she even end up trying suicide. She has no enough courage to tell someone because she thinks she is a woman and a mother of a child if she gets divorced or tells someone the society people will never treater her in the way they treat her now. But this is wrong no one should judge a woman who is suffering that much. We are in a modern world but there are so many people here who think divorced women have a bad character why? Did you ever try to know her side of the case or you only judge her? Never judge a book by its cover you don’t know how much someone suffers and your words can even hurt them the most.