The world has confronted many ethical and legal issues since the beginning of society, however, one such socio-ethical dilemma is capital punishment. Any sort of debate that involves a discussion of the death penalty or capital punishment would circumscribe the scope of criminal justice. Mechanism of retribution involves the implementation of punishment upon the wrongdoer, however, considering it just as a simple punishment is against the attributes of justice. 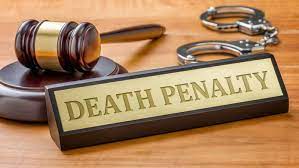 These discussions on the execution of the death penalty find their roots in historical foundations. In the present form of modern societies, with rights, obligations, and duties being the sole basis of the democratic structure, a question of associating the death penalty as a means of inflicting punishment for the criminal act which sees no boundaries is more valid or viewing death penality as against the principles of natural law philosophy which promotes the existence of eternal divine law reminding humans, how evil it is to take away someone’s life is, is more valid[1].

The word ‘capital’ has a Latin origin in the word ‘capitalist, which means ‘regarding the head’, i.e. execution by beheading. There are essentially two campaigns concerning the legitimacy of capital punishment: the campaign of abolitionists and the other being the campaign of retentionists. the former proposes abolishment of the death penalty, whereas the latter insists on its validity in society and existence. The primitive support of the death penalty comes from the philosophical idea and theory of retribution[2]. Jurisprudence as a subject is all about studying the law in its entirety. When seen from a jurisprudential aspect, capital punishment needs a wider scope and perspective of analysis in all sorts of ethics, moral, economic, and legal that impact the debates upon the dilemma of whether capital punishment should be implemented or not. This research paper aims at analyzing the perspectives of both the concept of naturalistic and positivistic viewpoint[3].

Natural law is a code of truths that paves the way for morality and justice to pour in. The naturalistic approach accepts what is ethical and morality just in society. This approach gives us a set of rules that an individual should follow in order to lead a flourishing life. This school of thought rejects ethical subjectivism and advocates for ethical and moral objectivism. The ideology focuses upon the fact that moral reasoning is much more valid, reasonable, and verified than any other mode of reasoning[4].

Proponents of the Naturalistic approach

In terms of the proponents of the naturalistic approach, they believe that society works on the principle of morality and justice. If the Almighty has provided us with life, we have not been given the authority to take away someone else’s life because it cannot be reversed then. It is immoral, hence, they propose that for whatever reason it might be, capital punishment should never be imposed. It is argued that the state should remember that whether one is subjected to such punishment on what basis. It should be remembered that not all but solely a few offenses of the gravest nature can carry with it the execution or capital punishment, the prime example being the murder of another[6].

Natural law is a philosophy that finds a connection between law, justice, and morality. The thinkers of this very school of thought believed in the notion that any law that does not follow the path of morality and ethics can never be considered as a valid law in society. Though this kind of naturalistic philosophy was extreme in the earlier days when natural law was mostly at its peak, however, some naturalist thinkers such as Thomas Aquinas were not entirely against the implementation of the death penalty. For example, he believed in the notion that necessity is bigger than any other nation in the society therefore if a surgeon finds it a necessity to amputate one hand of a patient, fearing that the poison might spread to all the parts of the body, becomes valid. Applying a similar analogy he further added, assuming the state to be a body and poisoned hand to be the person whose existence in the society might make it a hell for others to live. Hence, the political authority to kill the person becomes valid and morally just.

John Finnis advances his proposition in complete acknowledgment of the Natural law theory. He bases his views on the factor of natural rights. He calls these rights the basic values of life which must be protected and enshrined in every legal system.

Positivist theory opposite of what natural law theory proposes. Positivistic ideology is based upon law being the supreme most where people are obliged to obey the law irrespective of their moral and ethical objective in their lives. In many of the cases of success of the successful implementation of capital punishment was seen. The question arises whether capital punishment is something that is “ought” to be implemented. Even though, the positivistic approach premise relies on the “what the law is”, the question proposed here is within the “ought to be” kind and therefore it needs a solution within the appropriate “ought” form. In accordance with the concept of legal positivism. Therefore, a positivistic approach caters to the fact that since the right to life has been ensured by the state, the state has the authority to take it away only through desired, reasonable, and genuine rationale.

They base their decisions on “factual data”, therefore, if they witness a murder, which is unquestionably taking away someone else’s most precious human right (right to life), then they claim that one who takes away the lives of others in the society should not be allowed to live. However, It has been proposed that there are two guidelines in general that revolve around when a decision with regards to capital punishment is brought into the picture. First, the theme should give objective criteria to direct and limit the death sentencing discretion. The objectivity of those criteria should successively be ensured by appellate review of all death sentences. Second, the scheme must allow the decision-maker (whether judge or jury) to take into account the history, character, and record of an individual defendant.

Right to Life as a Will

Therefore, The proponents of reintroducing the death penalty would undoubtedly argue that capital punishment has a deterrent effect on the violent offenders in society for whom merely a threat of imprisonment is not sufficient. Moreover, others claim that the death penalty was introduced as a sanction against the crimes that were heinous enough to be curbed in this sort of way, hence, the death penalty was the only way to adequately reflect the intensity of offenses such as murder, etc. Those who were against the implementation proposed that the death penalty had the potential of being used in a discriminatory manner against the poor and suppressed classes of the society. Hence, it presented a grave risk that an innocent person might be executed.

Implementing capital punishment is an extremely sensitive issue worldwide. It is the heart and soul of retributive justice and still is prevalent as a practice in many of the nations and regions of the world. There are a significant amount of arguments both for and against the implementation of capital punishment. The most prominent factor to be considered with regard to this very issue is to build a link between the approach of natural law and the positivist ideology. Finding a bridge between morality and the power of law in society is important. Regarding these arguments, it then becomes vital to ascertain whether or not there’s any merit within the jurisprudential arguments especially from the natural law and positivist idea of legal thought[9].