Life is believed to be the most beautiful gift received by a person but life is not so fair with everybody. The most complicated thing about life is life itself. We all wish to be healthy and live a healthy life full of nostalgic memories. However, some people are not fortunate enough to live their dreams. Many people often are attacked by a dangerous disease which leaves them in agonizing pain throughout their life. Therefore, to prevent the person from leaving for heavenly abode in enormous pain, Euthanasia is performed. Euthanasia has been derived from the Greek words Eu and Thanatos which mean good death respectively. 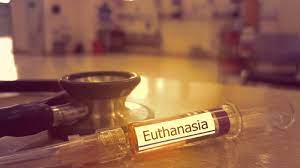 Euthanasia is an act that is performed by a family member or close relatives on patients who have no chances to return from the vegetative state and are in enduring pain. Therefore, to allow the patient to rest in peace, Euthanasia is performed. Euthanasia is also known as mercy killing[1]. Every person has a different opinion about Euthanasia. Some people consider it to be a mercy act performed on the person whereas some consider it to be a murder. In our country, several debates have happened on the topic of Euthanasia. Euthanasia is divided further into Active Euthanasia, Passive Euthanasia, Voluntary Euthanasia, and Involuntary Euthanasia.
Active Euthanasia refers to laying a person to rest by intentionally giving the person a dose of medication. On the other hand, passive euthanasia refers to withdrawing essential treatments or other elements without which a person will not survive. Voluntary Euthanasia refers to a situation in which the person himself expresses his desire to end his life and is further laid to rest by the doctors through medications or drugs with the consent of family members. Involuntary euthanasia refers to putting a patient at rest without taking into consideration of their wish. If the patients are in a vegetative state and are showing no response then the family members or close relatives may lay them to rest with the help of passive euthanasia.
In India, the apex court in the judgment of Common Cause (A regd. Society) Vs Union of India, declared that if a person is in durable pain and permanent vegetative state, then the person can ask the family members to let him rest in peace by withdrawing life support or any life-essential elements. The court has issued strict guidelines for passive euthanasia to be executed. If a person wants passive euthanasia to be executed, then the person will have to take the permission of the high court. The execution of the person should happen in front of two witnesses along with the permission of two medical boards and jurisdictional collectors.[2] The Supreme Court had also stated that the right to die with dignity is the fundamental right of a person. Therefore, when a person is in a vegetative state and is dying in vigorous pain then his right to die with dignity is violated. Therefore, the Supreme Court stated in its judgment that passive euthanasia should be legal.

However, even after the judgment of the Supreme Court, Euthanasia still persists as an issue to society. The first argument regarding euthanasia is the complex process of executing passive euthanasia. The huge number of formalities required to be fulfilled makes it a complex process. The second argument against Euthanasia is that if a person is in a vegetative state, he or she is not able to communicate his thoughts. In this condition, it is very debatable whether to take away their life or not for the sake of relieving their pain. Nobody likes to die and there might be a minimal possibility that the person can survive. So, passive euthanasia does not take into consideration the choice of the person being executed until and unless it is voluntarily asked by the patient.

Even though the Supreme Court has allowed people to practice Passive Euthanasia, the government is yet to pass an act defining the law related to Euthanasia. People are debating all across the country about its legality and questioning it on the basis of religious grounds and humanity, the topic still is a matter of discussion. In my point of view, Passive Euthanasia is correct but the process should not be so complex. The process should be amended by curtailing the number of formalities to execute the person. The process should include approval from the high court and the number of doctors who would give assent to the people should be limited to the medical professional who has been constantly examining the situation of the patient. My observation is that euthanasia is performed by the people because the patient is in endurable pain and has no option rather than to die. Thus, to prevent the person from going through endurable pain for a longer time, the court should give the decision in haste. The complex process requires a lot of time and therefore, a specific timeline should be decided in which the court will give the judgment to perform euthanasia.