In present time, globalisation has made countries to come nearer. As, the countries come nearer, they develop a friendly relation. They also trade with each other. In order to do an ample amount of trade, they declare a nation to be the most favoured one. 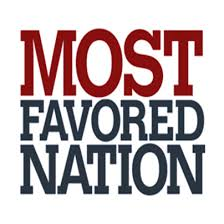 After such declaration, the nation owes some duty towards the other. One nation gives some advantages to the other. The nation seeking the advantage is known as a Most Favoured Nation (MFN). Their principles are also very important in the development and expansion of the trading system. The system has a lot of flexibility inherited in it and hence it also aims to remove the trade barriers. The trade becomes so easy with the help of MFN. After reading various things about MFN and its principles, various things come in mind that whether principle of most favoured nation be relaxed or not. So before discussing about this fact let us discuss about the meaning of MFN and the trading system of WTO.

WHAT IS THE MEANING OF A MOST FAVOURED NATION?

The most favoured nation is termed as a nation which is treated somehow special in many aspects in an international relation. Such nations also receive various trade advantages. Whichever country gets the status of being ‘ the most favoured nation’, that country cannot be treated less advantageously than any country. A lot of advantages are provided to a MFN. There has been a lot of debate in reference to the MFN. The legal field has a lot of discussion regarding MFN clauses that whether bilateral investment treaties include only substantive rules or procedural protections. The members of World Trade Organisation (WTO) agree for the accord of MFN with other nations also. It also includes various exceptions such as it allows the preferential treatment of developing countries, regional free trades and custom unions.
Most Favoured Nations also extend their bilateral relationships by following GATT and WTO norms. It is a very definite rule that a country which provides MFN status to other country has also to provide some concessions, privileges and immunity. The discrimination between the trade countries is strictly not done as it is totally against the rules of WTO.

The WTO agreement do not allow any kind of discrimination. The countries are not allowed to discriminate between their trading partners. Trading without discrimination is one of the most important principles of WTO. The second principle of WTO deals with the national treatment. It is very necessary for every nation to treat the outside goods equally. The same is applied to the domestic and foreign services. The principle of national treatment basically deals with the treatment to outsiders products that they should be treated like as we treat our nation’s product. In order to maximize the trade the trade barriers are lowered. The barriers concerned also include custom duties and some measures such as import bans. Sometimes due to trade barriers huge problems arise, so lowering any such barrier is crucial but promising for not raising it also more crucial. As we all know that a promise in a business creates various future opportunities so a mere promise is so crucial. With stability and predictability, investment is encouraged and more jobs are created as well. It also lets the people to enjoy the benefits of competition.

WTO is known as a free trade institution but many data say that it is not accurate. If we want to calculate WTO in the competitive value we can very clearly say that it provides open and fair competition. The conditions of non- discrimination which WTO imposes on countries is because there is a want of fair competition and it is widely spreaded to various fields such as agriculture, intellectual property etc.
WTO also contributes a lot in the development. The development of any nation needs a lot of flexibility but WTO and its members go through the learning process all along to the way of development.

ADVANTAGES OF MOST FAVOURED NATION

MFN is a status which denotes the economic position of a nation. In this system, a nation enjoys some special trade power or advantages given to it by their trading nation partners. It also indicated that low tariffs are taken and also there is an absence of many trade barriers. The trade system says that all MFN partners should be treated equally. There should not be any discrimination from the side of any nation.
The status of MFN is very important for all developing countries. There are various reasons behind it as :-
· It gives them access to the larger market
· It also lowers the trade barriers and as a result it also lowers the cost of their exports
· As a result, their products become more competitive and as a result businesses also get some greater opportunities to grow.

Due to the presence of this system the industries of several nations also get a chance to improve their products. The companies then grow to meet more increased demands. The country’s economic growth increases. So importantly, it also reduces the ill effects of trade protectionism.

SHOULD MOST FAVOURED NATION PRINCIPLE BE RELAXED UNDER WTO?

Yes, the principle of MFN should be relaxed under WTO. There are various advantages in relaxing this principle. As, we know that the trading system of WTO focusses a lot on non- discrimination policy, so the relaxation to MFN can tighten it more. The fair and open trade will be encouraged more. Trade barriers which becomes the hindrance in the trade will be lowered more and more. There will be an ample amount of opportunities to the business class and the competition will also be enhanced.
CONCLUSION
As, MFN gets advantages also in the terms of trade and it is due to the process of globalisation. It is very crucial to understand the trading principle of WTO. From being non- discriminatory to the fair one, every positive step this system teaches. It teaches to be very friendly with every nation. Each and every nation is the building block of the trading system. So, every nation especially a MFN should be strong.

https://en.wikipedia.org/wiki/Most_favoured_nation
This blog is authored by- Palak Tripathi