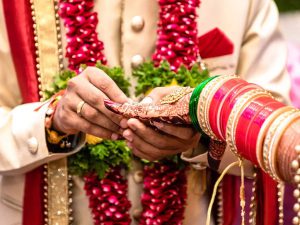 “Your daughter seems to be quite young, teach her the household work. Teach her to cook properly. It’s the time to get her married.” Commonly these are the words of people when they refer a girl of 18. There is just the opinion that a girl is born to do the household chores, but this kind of old mentality is challenged by the ambitious decision of the NDA government.  The Prohibition of Infant Marriage (Amendment) Bill, 2021, aims to raise the legal marriage age for women from 18 to 21, while also addressing maternal mortality, child mortality, and nutritional problems associated with underage marriages.

According to the National Family Health Survey-5 (NFHS-5), roughly a quarter of women between the ages of 20 and 24 at 18 or even before they turn 18. The situation is significantly worse in rural areas, where underage marriage is prevalent at 27%. In such an early age the young girls carry the burden of family and children which they are not at all mentally prepared for. Despite the fact that child marriage is illegal, statistics demonstrate that underage weddings are still a severe problem. Given the data by the various government sites, the question is whether raising the marriage age will result in true women’s empowerment, gender equality, more female labour market participation, autonomy, and better health outcomes for women and children. Gender parity is a way of life, not only a formal recognition of women’s rights. Equalizing the marriage age for men and women is a flimsy egalitarian ideal that does not lead to real empowerment but it can definitely open the doors of higher education and many other opportunities for the young girls. A study produced by the NCRB in 2018 addressed on gender-based violence:   Every 1.7 minutes, a woman is the victim of a crime, and every 4.4 minutes, she is the victim of domestic abuse. It is likely that after the change in the laws there will be awareness among the women about their rights, courage to get those rights and thus hopes to get these numbers reduced. (Will increasing marriage age to 21 help women?, n.d.)[1]

Now let’s have the legal perspective. According to the Hindu Marriage Act of 1955, the bride must be 18 years old and the groom must be 21 years old. While in the Islamic law, the marriage of a minor who has achieved puberty is permitted. Women and men must be 18 and 21 years old, respectively, to agree to marry, according to the Special Marriage Act of 1954 and the Prohibition of Child Marriage Act of 2006. It is expected that these laws will be amended in order to implement the new marriage age which is 21 for both men and women irrespective of their religion.

According to the newly released National Family Health Survey (NFHS), child marriage has declined slightly in the country, from 27% in 2015-16 to 23% in 2019-20, but the government is working to lower it even more. There has been much awareness about this on the ground level all because of the efforts of government, NGO’s and many other awareness camps conducted in schools as well as villages.

In June 2020, the Ministry of Women and Child Development formed a working force to look at the link between marriage age and issues including women’s nutrition, anaemia prevalence, IMR, MMR, and other social indicators. The group was directed by former Samata Party president Jaya Jaitly and includes NITI Aayog member (Health) Dr V K Paul and secretaries from different ministries. The committee was to examine at raising the marriage age and the effects on women’s and children’s health, as well as methods to improve women’s educational possibilities as well as empowering them and opening the doors of new opportunities for them. The committee was also expected to suggest a schedule for the government to adopt the policy, as well as any changes to existing legislation that would be necessary. Based on comments and opinions from young adults from 16 colleges around the country, the committee has recommended that the marriage age be raised to 21 years.[2] A total of 15 Non-Governmental Organisations (NGOs) were also enlisted to reach out to young adults in remote locations and marginalised populations. Members of the group reported hearing from youngsters of various religions, as well as from rural and urban regions. (Raising legal age of marriage for women: the law, the reasons and the criticism, n.d.)

It has been observed several times that delaying marriage and motherhood is not just due to legal age there are many other factors too. But it also can’t be denied that early marriage is the major factor for the same. On the other side, there is a well-established link between academic success and early marriage. Females are said to drop out of elementary school owing to a lack of options for higher education and subsequently marry off, according to experts. According to a research conducted by the International Centre for Research on Women, females who have dropped out of school are 3.4 times more likely than those who are still in school to get married or have their wedding date set (ICRW). According to the UNFPA’s State of the World Report 2020, 51% of young women in India with no education and 47% of those with only a primary education married by the age of 18, compared to 29% of young women with a secondary education and 4% with a post-secondary education.

Through this new bill, women will be free from the age barrier of 18 and for them the doors of higher education will be open.  Women with higher levels of education are also more prepared to make family decisions and instil safe sex, family planning, and abortion practises in their children and thus this majorly leads to the gender neutrality.

·       Raising legal age of marriage for women: the law, the reasons and the criticism. (n.d.). Retrieved from The Indian Express: https://indianexpress.com/article/explained/raising-legal-age-for-marriage-for-women-law-reasons-criticism-7675447/