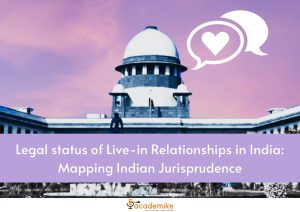 “A live-in relationship is a living arrangement between two people who do not want to marry but want to live together.”“In the recent decade, India has seen a significant shift in how the current generation views their relationships.”“Today many couples live together before their marriage for various reasons, such as checking whether they are compatible with each other or not.”“We have seen cases where couples seek divorce after getting married because they were not aware of certain things about one another or could not live together.”[i]“With society loosening up about pre-marital sex and live-in relationships, the stigma that once surrounded couples in live-in relationships has begun to dissipate.”“Today’s generation is torn between two crucial terms: marriage and living together, sometimes known as cohabitation.”“Rather than getting married, more couples are opting for cohabitation, commonly known as a live-in relationship.”“The younger generation in India has decided to accept the practice of live-in relationships as a result of the acceptance and adoption of several western traditions.”“A variety of factors have led to the slow acceptance of such cohabitation in society.”“These factors are as follows”:

“There is no explicit legislation in India that regulates cohabitationrelationships.”“In a number of judgments, however, the Hon’ble Supreme Court has used the opportunity to clarify the nature and scope of connections.”“According to the Indian Court’s established legal definition, a live-in relationship is an arrangement in which an unmarried couple lives together in a long-term relationship that resembles marriage.”[ii]

“Current Status of Cohabitation in India”

“In India, there is no specific law that governs cohabitation.”“Despite the lack of legislation addressing cohabitation, the sections of the Protection of Women from Domestic Violence Act of 2005, which protect all women in domestic partnerships, including cohabiting women, are praiseworthy.” “The Protection of Women from Domestic Violence Act of 2005 defines a domestic relationship as one in which two persons lived or are living together or shared a household under a number of circumstances, including marriage, consanguinity, a connection that resembles marriage, and so on.” “The inclusion of partnerships that are similar to or in the nature of marriage allows women who are cohabiting or living with their partners to seek remedy under the Protection of Women from Domestic Violence Act, 2005.”“Women in these types of relationships are especially vulnerable and exploited, both physically and mentally.” “To safeguard the safety of couples that join cohabitation, it is critical for the country’s legislators to adopt separate laws that governs these partnerships by defining the partners’ rights, responsibilities, and remedies.”“However, this would go against one of the primary reasons why the younger generation favours cohabitation or live-in relationships to marriage.”“The lack of any legal or societal formalities or requirements is the cause for this.Couples in cohabitation are free to initiate or end their relationship whenever they want, with no duties to complete throughout either process.”“As a result, enacting legislation would not only ensure rights but also impose obligations on partners. Despite the apparent lack of legislation on cohabitation, Indian courts have expressed sympathy with the new notion through their judgements, through various judgments that ambiguously identify the rights of cohabiting couples.”

“In D. Velusamy v. D. Patchaiammal[iii], the Hon’ble Supreme Court declared that in order for a relationship to be in the nature of marriage under Section 2(f) of the Protection of Women from Domestic Violence Act, 2005, it must meet certain basic conditions.”“Couples must live together and not only spend weekends together or have a one-night stand to be considered in a domestic relationship.”“The Supreme Court also ruled that a connection formed solely for the sake of financial support, sexual pleasure, or assistance does not qualify as a domestic relationship.”“In this case, the Court laid down following conditions from which someone can determine that if a relationship resembles marriage:”

a)     “In front of society, the couple must act as husband and wife.”

c)     “The cohabitation must be voluntary, and the couple must show themselves to society as a married couple.”

d)     “To enter into a lawful marriage, the partners must be competent.”

“Under Personal Laws, couples in a live-in relationship are not automatically awarded inherited rights to their partners’ property.”“The Hon’ble Supreme Court, on the other hand, ruled that people who have been cohabiting for a reasonable amount of time are entitled to inherit property from their partner.”“Despite its ambiguity, the ruling sets a precedent for future instances involving inheritance between partners in a live-in relationship.”[iv]

“Protection of Women & their Maintenance”

“In Virendra Chanmuniya v. Chanmuniya Kumar[v], the Hon’ble Supreme Court declared that unmarried women cohabiting with their partners or in a cohabitationrelationship have the same rights and remedies that were previously only available to married women.”“However, the recognition indicated above is insufficient to tackle the challenges that develop in live-in relationships.”“The Supreme Court accorded live relationships legal status, although this status does not address issues such as the legality of children born from such relationships, the entitlement to maintenance, alimony, and inheritance, among others.”

“Until recently, only a legally married wife was entitled to maintenance.”“In the case of Sumitra Devi v. Bhikan Choudhary[viii], however, it was decided that marriage might be implied for the purposes of giving support to a man and a woman who had been cohabiting for a long period.”“The Supreme Court’s judgement did not apply to all live-in partnerships.”“The prevention of domestic violence between partners is another facet of cohabitation.” “Couples who are cohabiting as well as those who are legally married are treated equally here.”“The Domestic Violence Act of 2005, which was passed in 2006, gave all people in domestic partnerships equal status.”“Domestic relationships are defined as a relationship in which two individuals lived or are living together or shared a household under a variety of circumstances such as marriage, consanguinity, relationship resembling marriage, and so on, according to Section 2(f) of the act.”“The Act aims to give wives, as well as women in live-in relationships who share the household, access to remedies.”“A live-in relationship cannot be ended in any formal way.”“The law specifies the grounds for entering into a live-in relationship by “chosen or circumstance,” however there is still some ambiguity when it comes to exiting a live-in relationship.”

“Status of Children born from the Cohabitation”

“Only a child born in a recognized marriage is regarded a legitimate child, according to Section 112 of the Evidence Act, making children born in live-in relationships illegitimate.”“In Tulsa v. Durghatiya[ix], the Supreme Court ruled that children born out of live-in partnerships are no longer regarded illegitimate in the eyes of the law.”“Nonetheless, in Dimple Gupta v. Rajiv Gupta[x], the court held in favour of the above-mentioned perspective that children from live-in partnerships have a right to support.”

“The Supreme Court ruled that a newborn born within a live-in relationship is only entitled to a part of the parent’s self-acquired property and cannot claim inheritance in Hindu ancestral coparcenary’s property.”“In accordance with provision of Section 16 of the Hindu Marriage Act, illegitimate offspring must be considered as legitimate for all practical reasons, including succession to their parents’ property.”“They cannot, however, succeed to the properties of any other connection using this rule, which is limited to the attributes of the parents in its application.”“Finally, couples in live-in relationships are unable to adopt children. There is no legal basis for them to do so.”“However, the central adoption resource authority has made it illegal for couples to adopt a child while still living together.”

“So far, the laws and rules governing live-in relationships have proven to be vague and imprecise.”“This necessitates quick changes to India’s cohabitation rules.”“Though in certain areas, cohabitation is recognized the same as marriage, in other cases, partners who choose to cohabit do not receive the same privileges as married couples.”“Reforms must be implemented not just in the country’s laws, but also in society as a whole.”“Live-in relationships are still considered immoral and unacceptable by a huge majority of the country’s population.”

“It is also clear that, despite the fact that there are no specific laws governing live-in relationships, the country’s courts have shown support for them and established guidelines to manage them.”“However, as previously noted, these judgments and rules are insufficient for live-in partners to build a compelling case in a court of law and go to great measures to prove cohabitation to the court.”“The need for a strict rule controlling live-in partnerships is urgent, as it will safeguard not only the people involved in the relationship, but also the children born out of it, who will be future citizens of the country.”

“To determine the rights and responsibilities of both cohabiting parties, strict norms must be established.”“Given the similarities in the nature of both partnerships, it is impossible to treat cohabitation and marriage as the same and award both relationships the same legal status.”“However, because cohabitation is in the nature of marriage, it must be treated similarly to marriages.”“Partners who are not married but live together and act as though they are married must be granted the same legal status as married couples.”

“Though cohabitation is simple to begin because of the independence and freedom it provides, there are some limitations and drawbacks, and a legislation is needed to solve these inconsistencies.”

[ii]Shweta Gupta, Issues & Challenges involved in Live-in Relationships in India, Women and the law in India with special reference to live in relationships, Shodhganga, https://shodhganga.inflibnet.ac.in/jspui/bitstream/10603/214286/12/chapter%20iv_issues%20and%20challenges%20involved%20in%20live-in%20relationships%20in%20india.pdf