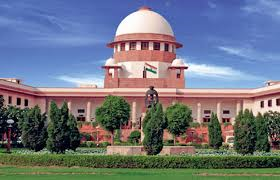 Ø  Writ of Prohibition and

Public Interest Litigation (PIL) are the writ petition brought before the High Court or Supreme Court to protect the basic human rights of those people who were unable to protect themselves. It is also known as “social interest litigation”. Public interest litigation means any public-spirited individuals or particular group can approach the court for the public (in the interest of the public or public welfare) by filing the petition:

Ø  In the Supreme court under article 32 of the Constitution of India, 1950

Who can file a PIL (LOCUS STANDI)

The term “Locus standi” means right to appear in a court.Locus Standi for filing a litigation is normally available only to a person who has suffered a legal injury by violation of his/ her legal right or legally protected interest by the impugned action of the state or a public authority or who is likely to suffer a legal injury by reason of threatened violation of his legal right or legally protected interest of any such action. This rule has gone a complete change. In S.P. Gupta& others V. President of India&ors[i] [AIR 1982 SC 149], the supreme court held that any member of public having sufficient interest can approach the court for enforcing the constitutional or other legal right of other person or group of person. The Supreme Court would have dealt with various petitions under article 32 of the Constitution of India complaining of infractions of Fundamental rights of individuals or weak or oppressed group.

In,Akhil Bharatiyasoshitkarmacharisangh V. Union of India[ii][AIR 1981 SC 298] the concept of PIL was initiated in this case. Justice V.R. Krishna Iyer held that wherein an unregistered association of workers was permitted to institute a writ petition under article 32 of the constitution of India for the compensation of common grievances.It was held that whether the petitioner belonged to a recognized union or not if there are common grievances, hence they can approach the Court under Article 32 of the Constitution of India. The Court set aside the objection and heard the contention of the petitioner.

Article 226 of the Indian constitution empowers High Court to issue various writs as mentioned in the article 32. Article 226 grants individuals to move to High Court for enforcement of fundamental rights and for any other purposes. Article 226 confers wider power to High Court, when compared to Supreme Court. The powers under article 226 cannot be restricted by the legislation. Even if the statute declares an administrative action as final, still it can be challenged under article 226.

The term “writ” literally means an order of the court, by which the Supreme Court or high courts direct an individual or an authority to do an act or abstain from doing an act. Articles 32 and 226 of the Constitution of India, 1950 confers writ jurisdiction on Supreme Court and high court. Writs are classified under the following heads:

The term “Habeas Corpus” means “to produce a body”. The purpose of this writ is to release the person who is arrested/ detained unlawfully or illegally.

Who can file a writ of Habeas Corpus?

The general rule is that the person who is detained can apply for writ. However, in certain cases the writ can be filed on behalf of his relatives or friends. But a stranger cannot file the petition for writ of habeas corpus.

In Rudal sha V. State of Bihar  [iii][AIR 1983 SC 1086]the Supreme Court in this case awarded exemplary damages of Rs.35, 000 to an acquitted person, who was illegally detained for more than 14 days.

The term “mandamus” means an order or a command. Mandamus is the judicial order issued in form of command to any constitutional, statutory or non- statutory authority asking to do a public duty imposed by law or to restrain from doing that act. This writ is also known as “Writ of Justice”.

Who can file a writ of Mandamus?

The affected person can only file the writ of Mandamus. The petitioner who files the writ has to prove that he has the right to enforce public duty in his favour.

In Gujarat State Financial V. Lotus Hotels Pvt. Ltd [iv][AIR 1983 SC 848], The Corporation entered into the agreement with lotus hotels to provide finance for construction of a hostel and did not release the funds. The Gujarat High Court issued the writ of mandamus to release the funds as agreed.

Who can file writ of certiorari?

Any person or a firm or non- statutory body such as managing committee of the school whose legal right has been taken up and who has been aggrieved by the order complained can apply for certiorari.

In A.K. Kripak V. Union Of India[v] [AIR 1970 SC 150], the Supreme Court issued the writ of certiorari to squash the selection list of the Indian Forest service on the ground that among the selected members one of the member was an ex-officio member of the selection committee.

Ø  The writ of prohibition is issued by the superior court to prevent the decision of the lower court in which administrative action is in the process, so that it cannot proceed further

Ø  Whereas, in writ of certiorari issued by the superior court is used to squash the decision already given by the inferior courts

In Raj leathers V. Secretary to the government of India[vi][AIR 1990 MAD 30] the court held that, the petitioner cannot get the help of court and obtain a writ of prohibition to stop the authorities from conducting investigations. The petition was dismissed.

The term “quo warranto” means By what authority. This writ is issued by judicial order seeking the person, who occupies public office, to show by what authority he holds the office. If it is found that holder of the office does not have valid title, then the writ of quo warranto is issued to vacate his office.

Who can file a writ of Quo Warranto

If a person fundamental or legal right is violated, he may apply the writ of quo warranto. This writ is issued with a view of restraining a person from acting in public office which he is not entitled.

This blog is authored by BharathVaaj S

26 thoughts on “Rights to Constitutional Remedies”