When looking into the corporate world, the first thing which we should understand is that, what it actually means, that is what a company is? In Indian laws a company does not have a particular definition but ‘Company’ according to section 2(20) of the Companies Act, 2013 has to be registered under this act to become an incorporated association. 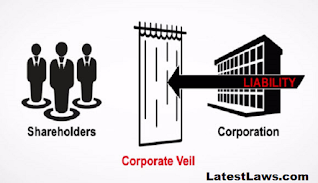 All the companies have their different identity and position from its owner. It is artificial but often cases have come in which the power and position of the company was misused. Though a company is not a living being, but has its rights guaranteed by the law. And such functioning of the company is done by people working for it. Since it is not shown on the face of it, the corporate world has given it the name corporate veil. But when these operators become a toxic medium and start firing bullet from someone else’s gun the law takes action against them. So corporate veil is a legal concept which provides identity to a company besides its owner and shareholders. It protects the company from the misuse and liability from debts and obligations.

In Subhra Mukherjee v. Bharat Coking Coal Ltd[1]was a case involving private coal company. So in this the directors on knowing about the nationalization of the company transferred the assents on their name to their wives so that they could save them from falling in the hands of the government. The court held that this transaction was not made in the favour of the company and hence the lifting the veil of incorporation was much needed.

The doctrine of corporate veil is used by most of the courts but nowadays attempts have been made to narrow down the scope and applicability of the doctrine under the following two heads:

The Companies Act, 2013 has been integrated with various provisions which tend to point out the person who’s liable for any such improper/illegal activity. These persons are more often referred as “officer who is in default” under Section 2(60) of the Act, which includes people such as directors or key-managerial positions. Few instances of such frameworks are as following:-

i) Misstatement in Prospectus: – All the companies under the companies act, 2013 are supposed to make a prospectus which includes name of the directors, debentures and main objects. If any person attempts to tamper such information in the prospectus then he can be subjected to penalty or imprisonment or both.

ii) Failure to return application money: – Under section 39 of the act, a minimum amount has to be played on the application received within thirty days. And on the failure to do so, penalty can be charged. Similar things happened in Hendon vs. Adelman[2]in which the signatories changed the name of the company while signing a cheque.

iii) For investigation of ownership of company:–  The government has the authority to check on matters related to the company and its membership for the purpose of determining the true persons who are financially interested in the success or failure of the company; or who are able to control or to materially influence the policies of the company.

i) Tax Evasions: – Every legal entity in India is bound to pay taxes, and on failure to do so the court has power to take necessary action. A company is an individual legal entity in the eyes of law and if attempts are made to unlawfully avoid this duty then strict rules are laid for committing this offence. In Dinshaw Mneckjee Petit re[4]the owner was sued for transferring his income in his 4 sham companies.

ii) Prevention of Fraud / improper conduct:– After every fraud there is a human agency that is involved in committing such acts because no company can commit fraud on its own. Thus, one may make efforts to prevent upcoming frauds. Similar thing was observed in the case Gilford Motor Co Ltd vs. Horne.

iii) Public Interest policy: – All the companies are required to conduct their functions according to public policies and if found something going wrong the courts can make such persons guilty of the act. To protect public policy is a just ground for lifting the corporate personality. As it happened in Jyoti Limited vs. Kanwaljit Kaur Bhasin & Anr[5] in which the representative of the company attempted contempt of court and so serious punishment was inflicted upon him after lifting corporate veil.

iV) Agency companies: – Where it is expedient to identify the principal and agent concerning an improper action performed by the agent, the corporate veil maybe neglected.

The petitioners in this case were the minority shareholders of Tata Sons Limited , Cyrus Investments Pvt. Ltd. And sterling Investments Corporation who filed a petition alleging the act of oppression and mismanagement by Tata Sons Limited, before the National Company Law Tribunal. They challenged the grounds on which Mr. Cyrus P. Mistry was replaced as the executive Chairman.

When the matter was being heard in the tribunal arguments were made by the petitioners on the basis of Section 241 and 242 of the Companies Act, 2013. These two sections are for preventive reliefs to arrest the malafides ongoing in a company.  The tribunal initially dismissed the petition but later it was challenged in the appellate tribunal. But mere unfairness of the action complained of is not enough to invoke section 241 or to the company.

So finally on 12 July 2018, the National Company Law Tribunal (Mumbai) (“Tribunal”) delivered its landmark judgment in the matter  as the company petition denied all reliefs and rejected all allegations raised therein by the petitioners.

Wherever the members of a company thereby misuse the privilege conferred to them by violating any statutory provisions or carrying out any non-desirable activities under the guise of the corporate veil above the company,, the courts are entitled to look beyond the veil, and this is known as lifting of corporate veil. But this is not a general rule and has to be applied only under exceptional circumstances. This leaves way for the instances under which the same could be done to be identified. Evolved through common law, the identified grounds are façade or sham, impropriety, single economic entity argument, evasion of taxes, avoidance of welfare legislation etc. It is worthy to note that what is important is the nature of the case. Though there aren’t strict and stern disciplines that whether or not the corporate personality can be neglected, the doctrine is however, a very powerful weapon in hands of Judiciary to find the needle in haystack.

This blog is authored by Jeetika Aggarwal