Our legal system is based on a very well-known principle i.e. Presumption of Innocence. This basically means until and unless an accused is proven guilty he/she will not be regarded as a Criminal and will be called under trial. 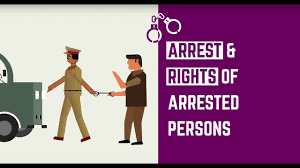 This is what the concept of “Innocent until Proven Guilty” is. Keeping all these things in mind, even an arrested person is provided with certain legal rights and cannot be taken away under any circumstances. This small piece of writing gives a brief overview of the rights enjoyed by an arrested person. So here it is.

Right to know the Grounds of arrest

Just suppose an individual has committed a crime and has been arrested by Police without any arrest warrant. So here that individual has full right to know on what grounds his/her arrest is made. This right is clearly mentioned in Section 50(1) of CrPC. 1973, which states, “Every police officer or other person arresting any person without warrant shall forthwith communicate to him full particulars of the offense for which he is arrested or other grounds for such arrest.”

Now if that arrest has been made by any Subordinate Officer under the provisions of Section 55 of Cr. P.C. 1973, so before making an arrest the officer must show order to an accused which mentions that his Senior officer has designated him to make an arrest. In case that Subordinate officer fails to show that order then that arrest will be regarded as an illegal arrest.

If an arrest is made using an Arrest warrant even then the arrested person is entitled to know the grounds on which arrest is made. In the language of Section 75 of CrPC., “The police officer or other person executing a warrant of arrest shall notify the substance thereof to the person to be arrested, and, if so required, shall show him the warrant.”

Even the Supreme law of the land i.e. Constitution confers this right as a fundamental right. Article 22(1) states, “No person who is arrested shall be detained in custody without being informed, as soon as may be, of the grounds for such arrest nor shall he be denied the right to consult, and to be defended by a legal practitioner of his choice.”

These all provisions make it very clear that every arrested person has a right to know the grounds on which an arrest is made.

Right against Self – Incrimination (Right to Silence)

It is obvious that when a person is arrested he/she is going to be interrogated by Police in Police custody and by Prosecution in the court of law. It completely depends on an arrested person whether to hold silent or answer those questions at the time of interrogation. His silence cannot be used against him he can either be innocent or guilty. In short, he has all the right to keep silent and not answer those questions. The same has been stated in Article 20(3) of the Constitution of India, “No person accused of any offense shall be compelled to be a witness against himself.”

It is not necessary that all accused are well aware of the law and are aware that the crime done by them is bailable. So it is the duty of the Police to inform the accused that he/she can apply for bail. This has been clearly mentioned in Section 50(2) of CrPC which states “Where a Police Officer arrests without warrant any person other than a person accused of a non-bailable offense, he shall inform the person arrested that he is entitled to be released on bail and that he may arrange for sureties on his behalf.”
In simple words, Accused is entitled to know whether the crime committed by him/her is bailable or not.

Right to be taken before a Magistrate without any Delay

No matter whether an arrest is made with or without a warrant, it is the duty of the concerned Police Officer to take that accused before a magistrate without any unnecessary delay. No accused can be detained for more than 24 hours without any Judicial Scrutiny. This has been clearly mentioned in Section 56 and 76 of the Criminal Procedure Code, 1973.

Right to consult a Legal Practitioner

A trial is not possible without a proper representation of the accused and proper representation is not possible without an Advocate. So our legal system gives the right to the accused to hire any legal practitioner of his/her choice. This has been enshrined in Article 22(1) of the Indian Constitution which states, “No person who is arrested shall be detained in custody without being informed, as soon as may be, of the grounds of such arrest nor shall he be denied the right to consult, and to be defended by, a legal practitioner of his choice.”The same has been provided in Section 50(3) of the CrPC.

Not everyone has their pockets full of bucks to hire their lawyer. Keeping all these things in mind there is a provision for providing free legal aid and can also be provided before the court trial begins. This free legal aid is provided by Legal Service Authority.

Right to a fair and speedy trial

Ideas of equality before law find a designated place in both in Preamble and Fundamental Right (Article 14) enshrined in our Constitution. It means that all individuals are equal in the court of law and are entitled to have a fair trial. CrPC says that there should be an open court trial in order to have a fair trial. However, there are certain exceptions where in-camera proceedings are held.

Right to be examined medically

If an arrested person is of the notion that he/she should be medically examined then it is his/her right to be examined by a medical practitioner. This has been provided in Section 54(1) of CrPC which states, “When any person is arrested, he shall be examined by a medical officer in the service of central or state government, and in case the medical officer is not available, by a registered medical practitioner soon after the arrest is made.” These are some legal rights that are provided to each and every arrested person. However, there are many who in the darkness of illiteracy or unawareness fails to enjoy these rights.
Image Source
Author: Dheeraj Diwakar Dr. Ram Manohar Lohia National Law University Lucknow