The Act governing abortion laws in India is the 1971 enactment of Medical Termination of Pregnancy which prescribes a particular period in which to terminate the foetus, outside of which period it shall be a punishable offence. While ‘abortion’ has been a debated topic of discussion throughout the world, in India it is still considered inhumane in certain circumstances; however, to answer in one word, yes abortion is legal in India. 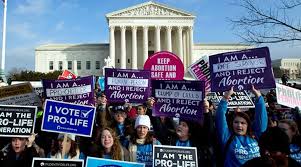 Considering the uproar revolving around the pro-choice activism throughout the world, the legalization of the same in India shows unmatched forward thinking. The MTP is an unapplaud piece of legislation that was also amended in early January this year to include abortion as being part of reproductive rights. The changes have amended the prescribed period of legal termination from 20 to 24 weeks to include minors, rape victims, incest victims and disabled women. The law also recognizes unplanned pregnancy under the garb of contraception mishap, making it now available to even unmarried women and her partner. This has been some very positive changes on India’s empathetic gender equality front.

But talk regarding the history of abortion laws would be incomplete without mentioning Roe v Wade. A 25 year old by the name of Norma McCorvey led a simple minimalistic livelihood when she was attacked and raped by three men, one August night in 1969. Because of the Texas law she could not legally go through with an abortion and found an attorney that would further help her file a complaint against Dallas District Attorney, Henry Wade who was supposed to be the enforcer of abortion laws in the state. The suit ran under the pseudonym of Jane Roe and was a class action for all women present, past and future. They alleged that the Texas Law invaded with the right to privacy of a woman and her right to decide to bear or not to bear children.

Weddington told the court that pregnancy to a woman can completely disrupt her life. She pointed out that in the State of Texas many schools and colleges required a woman to quit if she was pregnant; women were often forced to leave their jobs in the early part of their pregnancies, and the state provided no unemployment compensation or welfare for them. So, she asserted that a pregnancy to a woman was perhaps one of the most determinative aspects of her life. It disrupted her education, her employment, and often, her family life. Therefore, they (the appellants) felt that, because of the impact on women, that certainly – in as far as there were any rights which were fundamental – was a matter which was of such fundamental and basic concern to the woman involved that she should be allowed to make the choice as to whether to continue or terminate her pregnancy. As to the rights of the unborn child, Weddington said that the Constitution attached protection to the person at the time of birth; these persons born were citizens and that the Constitution gave protection to people after birth.”[i]

No other case has the same polarizing effect upon public opinion as Roe v Wade. Though the discourse over the legality of abortion was on even before Roe, the societal view indicated unsteadiness.[ii]

India’s move comes at a time when the landmark Roe v. Wade in the Supreme Court of the United States (US) is under scrutiny. Smriti Irani, the then Cabinet Minister for Textiles and Women and Child Development, observed that India now stands among the few nations with highly progressive woman laws on a broad range of grounds- especially victims of rape.

The barbaric and primordial mentality to tell a woman that she must bear a child of consensual coitus while may be less intrusive on her rights, is still an interference with her freedom to decide her way of life. In a lot of cases the foetus is referred to as a person and emphasis is thrown on its life, however it was in Roe v Wade that found it unfruitful to decide when life begins.

The precedents used in Roe did not pit the “almost person” argument against the woman’s freedom of choice. In such circumstances it becomes hazy as to where must the judge look to for word on the law. To perhaps jurisprudence, or religious texts, or to the trends of the present generation and their way of life. How are we to confirm that prohibition of choice would go on to ensure the human life a good life. Perhaps the argument for the foetal life and the woman’s’ is not so disjointed.

In 2008 when a couple in India, due to technological advances in medical science, came upon notice of their 26 week old foetus’ heart defect. In light of technological advances it became more imperative to bring amendments to MTP Act, 1971. The plea was however turned down, the court still observed that the legislature could bring it under their purview that the legal limit may be changed. Incidentally and unfortunately, the couple had a miscarriage soon after the verdict. Since then many cases have reached the Supreme Court to abort fetuses often an outcome of sexual crimes.

We forthwith acknowledge our awareness of the sensitive and emotional nature of the abortion controversy, of the vigorous opposing views, even among physicians, and of the deep and seemingly absolute convictions that the subject inspires. One’s philosophy, one’s experiences, one’s exposure to the raw edges of human existence, one’s religious training, one’s attitudes toward life and family, and the moral standards one establishes and seeks to observe, are all likely to color one’s thinking and conclusions about abortion. – Justice Blackmun in Roe v. Wade[iii]