LGBT is an acronym used for Lesbian, Gay, Bisexual and Transgender. There exist deep-embedded homophobic and transphobic attitudes combined together with a lack of adequate legal protection against discrimination on grounds of sexual orientation and gender identity, expose LGBT people of all ages and in all regions of the world to egregious violations of their human rights. 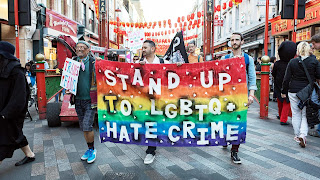 The century old law i.e Section 377 of Indian Penal Code prohibiting sexual intercourse against the order of nature has been decriminalized in 2018 by Supreme Court in the case Navtej Singh Johar and Ors. v. Union of India. But the actual struggle begins hereafter. The taboo of homosexuality in the society is so deep rotted that it has led to crimes on homosexuals. People cling to stereotypes and use traditional ways to deal with the issue. One such method is “Corrective Rape-The use of rape as a tool to correct the sexual orientation of LGBT people with the objective of getting them to toe the societal norms”. The term was coined in South Africa where such crimes are rampant. Often it is the family members of the victim who facilitate it because of which the victims refrain from seeking legal recourse. Victims find it traumatizing to speak of their brothers/ cousins turning rapists and prefer to delete the incident from their memories and cut off ties with their families. In a society bound by a rigid set of social and cultural norms that dictate the terms and conditions of education, career and marriage, the lack of family support can prove to be a big blow to the mental and physical health of LGBT people.

There has been an increase in the rate of acceptance across the globe but at the same time the hate crimes against the LGBT has increased. There have been many reports of abuse, harassment and violence over the years directed against LGBT people. Due to such crimes, they are forced not to disclose a central aspect of their personal identity i.e. their sexual orientation, both in their personal and professional spheres to avoid persecution in society and the opprobrium attached to homosexuality. Unlike heterosexual persons, they are inhibited from openly forming and nurturing fulfilling relationships, thereby restricting rights of full personhood and a dignified existence.

Even though the judgement has been passed but there are no laws to recognize same sex marriages. This led to further discrimination at various places, for instance- such couples cannot have insurance for their spouses or adopt a child. Therefore, there is a need for an anti-discrimination law which would empower them to build productive lives and relationships. There are still petitions which are for the legalization of same sex marriages. The government still needs to make many changes in order to ensure that LGBTQ community is not denied of any public service, given equal opportunities and treated equal without any discrimination.

There are lack of laws for protection and recognition of LGBT community. They face discrimination at work, schools, and social gatherings. They are being treated differently and called out by various names. Homosexuality, bisexuality and other sexual orientations are equally natural and reflective of expression of choice and inclination founded on consent of two persons who are eligible in law to express such consent and it is neither a physical nor a mental illness, rather they are natural variations of expression and free thinking process. It is high time that we should bid adieu to the perceptions, stereotypes and prejudices deeply ingrained in the societal mindset so as to usher in inclusivity in all spheres and empower all citizens alike without any kind of alienation and discrimination.

There is no short cut solution that can address the problems facing many LGBT people. Therefore, in the light of the above mentioned discussion, following recommendation can be developed in recognizing the role that individuals as well as institution can take effectively:

This is going to be an uphill battle, but it is a battle worth fighting. The state is the guardian of rights of the citizen and therefore for protection of the rights it should come forward and takes steps to eliminate inequality in any form and provide safe and acceptable environment to live in. Also, along with introduction of new laws for homosexual marriage approvals, steps should be taken to stop crimes against LGBTQ community.
The core legal obligations of States with respect to protecting the human rights of LGBT people include obligations to:
Protect individuals from homophobic and transphobic violence.
Prevent torture and cruel, inhuman and degrading treatment.
Repeal laws criminalizing homosexuality.
Prohibit discrimination based on sexual orientation and gender identity.
Safeguard freedom of expression, association and peaceful assembly for all LGBT people.

This blog is authored by Gunjan Agarwal, student at Jaipur National University