Justice comes much later in any society what comes first is concept of crime. In other words, there is no need of justice if the society is crimeless or there is no crime prevalent in any form in the society. There is something unique type of crime or offense which we are concerned with i.e. lynching, particularly in Indian laws; there has not been single act which defines lynching directly though there have been various cases in the recent past. 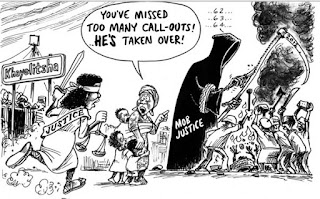 If we try to understand the basic definition of mob lynching, then first we need to break the terms into two i.e. “Mob” and “Lynching” , where mob means ‘group of people united for common purpose’ and ‘lynching’ means ‘extrajudicial killing of victim by taking rule of law in own hands in order to punish the victim for his/her bad conduct towards the society(mere suspension is also enough), so mob lynching means extrajudicial killing of a person by group of people by unlawful means in order to administer justice even before the trail and court of law.
We will now try to understand the term “mob justice” as we have discussed mob lynching more as an offense , so if we see one perspective or one side of the same coin i.e. from the perspective of democracy , rule of law and justice then in that case act done by group of people will be considered as illegal in eyes of law or reasonable prudent man, at the same if we focus on other perspective of group of people responsible for lynching then in that case the act done by those group of peoples we be deemed just as they are punishing the culprit ,here in this case it become more important to define culprit , here culprit term is variable for those people , for them even mere the accused or suspect can be held guilty.

In democracy we the people elect our representatives to protect human rights , basic fundamental right and to establish stability in the region where the things can be changed by the process of debate rather than revolution basically the spirit of the people lies in the constitution of the country ,here also comes into effect social contract theory where people surrender few rights in the forms of duties towards state and in result of that state will give protection to the people from any external territory and integral aggression for that matter . As we discussed constitution is the spirit of democracy as it mentions right to life is our fundamental right and state has the duty to protect life of individual.

On the other hand, Mobocracy means power is within an intolerant group of people, they acquire all the power to rule over matter of public affairs. These groups are known to serve the purpose of justice even before trial but do you think there is no importance of judiciary in the country? the answer is no, judiciary plays very important role in any democracy and what mob do in the same of justice, they just do killing upon mere fake news spread on social media, though all news are not fake but still not believing in justice system of the country is not justice and it is against the fundamental principle of democracy as justice is law’s business not mobs[i] . Now consider the second factor into picture – what if the accused person who was killed in mob lynching is innocent and the claim was false, then who will insure justice to victim, so mob justice is no justice. We have no law in the country on lynching does not implies that mob will be given free hand to do killing on the name of justice

The 2015 Dadri mob lynching refers to case of mob lynching in which a mob of villagers attacked the home of 52 year old Mohammed Akhlaq, killing him, for suspicion of slaughtering a cow. The attack took place at night, on 28 September 2015 in Bisara village, near Dadri, Uttar Pradesh, India[iii] .

The lynching of Pehlu Khan in Rajasthan serves as a classic example. In this case, the state police filed a chargesheet for cow smuggling against the deceased who was lynched by a mob of self-styled gau rakshaks – who were eventually acquitted – in Alwar for transporting cattle in 2017[iv].

On 16th April 2020, two Sadhus associated with the Juna Akhara, 70-year-old Kalpavrishka Giri Maharaj, and 35-year-old Sushil Giri Maharaj along with their driver 30-year-old Nilesh Telgadewere were on their way from Mumbai to Gujarat to give Samadhi to another Sadhu. At Gadakchinchale village, a wild and frenzied crowd of over more than 100 people attacked them. The villagers allegedly deemed them as thieves and started attacking them. The police claim that their team which had rushed to the spot to rescue the 70-year-old man also came under the attack of the violent mob[v].

Lynching should be sanctioned by law as in democratic country every individual or group need to follow rules and regulation and those rules and regulations drive their authority from constitution itself. Mob lynching can be spontaneous as well as premeditated, many time it has been seen that many innocent people got lynched, for example- in Palghar there was spontaneous reaction of mob against those sadhus as they treated them as sadhus. there has been various instances where Muslims has been killed for no reason or because they are Muslim and has been caught in activities of cow slaughtering which is against the sentiments of Hindus .

There should be proper establishment of special task force to monitor the issue of mob lynching. fake news spread need to be addressed by putting surveillance and we have to make IT laws more stringent in terms of monitoring fake news spread via social media, It is time that we concentrate on redefining our ideals and standards of humanity. We need to start calling the perpetrators of this offence just what they are: murderers, not preachers of self-righteousness. Morality or perceived piety of murderers, in any progressive society, can never be a defense to their crime[vi].

Image Source
This blog is authored by Harsh Gupta, 2nd year student of Hamdard Institute of Legal Studies and Research.