I believe Racism is the irrational belief that a certain race has particular cultural attributes invested due to the hereditary factors that make individual races inherently superior to the others and give them the right to exploit the so-called “inferior races.” When we openly state the meaning of racism, we can see how inexplicable and unimaginable, such a thought is. But racism is so deep-seated in our consciousness and subconsciousness that we have long bowed down, submitted to such an enraging and disgusting ideal. 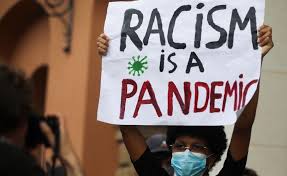 It’s just so crazy how people are judged by the way they look, how they speak, or even the type of hair that they have. This is just a sad reality of how we have dismally failed as the human race. I strongly believe a person should be judged based on their actions or behavior and never on their skin color. Not to be escaped mention is the fact that All people are born equal, and nothing can change that. It is such a familiar phrase but are we really living up to it? We keep talking about how modern society embraces diverse cultures and diverse people. We try to accomplish great and enormous things like World Peace, eradicate hunger, and poverty, but we are not ready to unite to make such changes happen.

No one is born racist but hatred and surroundings give birth to this inherent behavior. Racism refers to the horrific belief that inherent physical appearance has everything to do with intelligence and personality. Racism is so deep-rooted in cultures that we have wrongfully placed it as a norm. The dire need to eradicate racism has come to arise after a series of violent activities and horrific behaviors against people for their race. So many people have succumbed to this behavior and presently a lot of people are still victims of Racism and suffer in the workplace, society, schools, and every other place even where you least expect it.

Maintaining a status quo that protects racism is often justified as “keeping the peace” or maintaining law and order. In the book Stamped from the Beginning, Ibram X. Kendi writes that in America, racist ideas have long been used to suppress resistance to racial inequalities. When people believe racist things like that black people are naturally more violent and dangerous or that they are not disturbed by police brutality or mass incarceration. Those who benefit from racist institutions need racist ideas that prop up discrimination or society would rebel against the status quo. Therefore, “keeping the peace” becomes more important than justice and equality.

Self-interest is one of the major root causes of racism. During the slave trade era that occurred in the 17th and 18th centuries, a lot of African men, women, and children were taken by force or kidnapped and forced into slavery. Essential also is the fact that instead of trying to attract voluntary laborers, the Europeans decided to go to extremes and used slavery. They realized that on their own with their own workmen they could not handle the farming and all the tasks and sort to exploit others for their own self-interests. They needed to justify their barbaric action, so instead, they claimed that slavery was acceptable because the slaves were less than human. What a disappointing and enraging justification. It is crystal clear that the same cause is still a catalyst and major cause of racism today.

Policies that discriminate by race and keep people in poverty reinforce racist beliefs. Housing laws are a prime example of this. Many laws kept Black people from owning houses in certain neighborhoods, relegating them to lower-quality housing and preventing them from accumulating wealth.[1] Society looks at this and believes it justifies beliefs about how blacks, Hispanics, and Asian people only live in low-income, crime-ridden neighborhoods and that it’s somehow a choice. Moreover, there are cases where black and mixed-race children have been denied admission in schools because of the looks of their hair.

It is of paramount importance to not how television, books, music, music, and radio have a huge impact on how society as a whole views’ races. We can not deny the fact that media is giving us an insight into different cultures, therefore, making it one of the instruments that fuel racism and keep racial stereotypes alive. For example, in most movies released the black-men are over-represented as perpetrators of violent crime and illegal activities like drug trafficking. Furthermore, so-called “inferior races” are over-represented as being very poor and always financially struggling. Essential is the fact that this greatly affects how black people view themselves and as well as society’s perception of black people.

FAILING TO RECOGNIZE RACISM IN ONESELF

People are not good at recognizing racism in themselves. Many believe that racism can only look like slavery, segregation, or specifically negative and blatant references to race. People often fall into the trap that as long as someone is not wearing a white hood or using racial slurs, they can’t be racist. This failure to recognize prejudice, accept responsibility, and be better is a key reason why racism is still so persistent.[2] It’s so sad how other how blaming others has become a normal human tendency. For example, many people blame immigrants for stealing their jobs and depriving them of their economic benefits as rightful citizens. This only gives birth to hatred, resentment, and bitterness in which the end product is the horrific behavior of racism.

It is also important to note that various anti-discrimination laws have been put in place in different countries designed to prevent all kinds of discrimination including racial discrimination. For example, the Racial and Religious Tolerance Act 2001 of Australia. But the truth of the matter is it needs our cooperation in order to work hand in hand with legislation in eradicating racism from the face of the earth. Racism is the barrier hindering us from social advancement in our societies. It is very much possible to end and eradicate racism in our society if we truly give it a thought and are more open about such sensitive topics. Racism has adverse effects and it is high time we made a change and bring the world together. No one ever chose to be born black, white, brown, or whatsoever we might call it. God created us equal and we do not need racism to divide us and tell us otherwise. Honestly, we can achieve anything that we set our mind to. Let love lead!

6 thoughts on “RACISM, A BLATANT REALITY THAT IS SHOWING NO SIGNS OF TONING DOWN”