Indian society is tainted with various issues that are deemed as social problems. Some of the issues have been there for a long time, and some are of recent existence due to changes in the social and political order in the world. 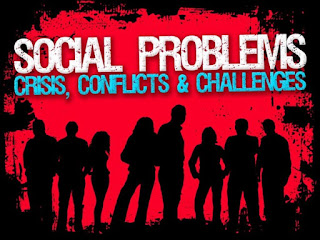 A social issue is a condition that is not preferable and prohibits the balance of a society. A social issue is a problem that influences many citizens within a society. It is a common problem in present-day society and one that many people strive to solve. It is often the consequence of factors extending beyond an individual’s control. This research seeks to shed light on the various social problems and their impacts on society.

The use of illegal drugs or the use of prescription or over-the-counter drugs for purposes other than those for which they are meant to be used, or in excessive amounts. Drug abuse may lead to social, physical, emotional, and job-related problems.

Domestic violence and abuse have been some of the most common triggers of drug abuse. When people are emotionally or physically abused, and they do not seek help, they may engage in drugs to forget their problems. Since most abuse cases are perpetrated by close family members, this makes it harder for victims to overcome, and many opt to try out drugs, which they perceive will distort reality and make them forget their concerns

Media influence is a major causality of drug abuse, especially regarding drugs such as alcohol and tobacco. The media makes it appear “cool” to use such drugs through flashy advertisements in the media. However, less emphasis is placed on the adverse effects of such drugs; hence teenagers are influenced to use them without enough information on repercussions faced due to drug use. This leads to addiction, and by the time victims realize, they cannot do without drugs
SOLUTIONS – Rehabilitation centers should be abundant to help deter the effects of drug abuse also to educate the drug abusers on the effects of drugs.

Overpopulation occurs when a species’ population exceeds the carrying capacity of its ecological niche. It can result from an increase in births (fertility rate), a decline in the mortality rate, an increase in immigration, or an unsustainable biome and depletion of resources.”

Agricultural advancements in the 20th century also have allowed humans to increase food production using fertilizers, herbicides, and pesticides and yields further. This allowed humans with more access to food that leads to subsequent population explosions.

Immigration as well as a role in overpopulation whereby people prefer to move to developed countries like the US, UK, Canada, and Australia, where the best facilities are available in terms of medical, education, security, and employment. The result is that those people settle over there, eventually making those places overcrowded.
SOLUTIONS –

· As the population of this world is growing at a rapid pace, raising awareness among people regarding family planning and letting them know about serious after-effects of overpopulation can help curb population growth.
· Sex education would be a way to curb overpopulation. Social marketing regarding overpopulation effects can go a long way as well.

Prostitution reflects economic inequality in society. Many poor women feel compelled to become prostitutes because of their lack of money; because wealthier women have many other sources of income, the idea of becoming a prostitute is something they never have to consider.
Poverty and unemployment seem to be the main reason where woman will choose to enter the industry of prostitution

Due to the lack of working experience, youth has fewer job opportunities in the market. This situation has led them to a poor financial situation where they are forced to choose to enter prostitution as this job can provide them with a wealthy income
SOLUTION –
Sex workers should enjoy the same labor rights as other workers and the same human rights as other people Legalization of prostitution would be a better way to protect people in the sex industry from rape and violence.

Poverty is a global problem. … That number also includes extreme poverty that is defined by the UN as “a condition characterized by severe deprivation of basic human needs, including food, safe drinking water, sanitation facilities, health, shelter, education, and information.
Without access to basic essentials like food and water, it’s impossible to get out of poverty’s cycle. Everything a person does will be about getting food and water. They can’t save any money because it all goes towards their daily needs. When there isn’t enough sustenance, they won’t have the energy to work. They are also way more likely to get sick, which makes their financial situation even worse.

In terms of education, poor children typically go to rundown schools with inadequate facilities where they receive inadequate schooling. They are much less likely than wealthier children to graduate from high school or to go to college. Their lack of education in turn restricts them and their own children to poverty, once again helping to ensure a vicious cycle of continuing poverty across generations.
SOLUTIONS-
Education develops skills and abilities, corrects some of the imbalances that come out of marginalization, and decreases both risk and vulnerability.
Adequate healthcare options for all go hand-in-hand with improved food security and clean water and represents a larger need for governments to offer the basic social protections and services to keep their citizens healthy and give them affordable treatment options when they aren’t.

the social process by which men and women are not treated as equals. The treatment may arise from distinctions regarding biology, psychology, or cultural norms. Some of these distinctions are empirically-grounded while others appear to be socially constructed.

One of the causes of gender inequality within employment is the division of jobs. In most societies, there’s an inherent belief that men are simply better equipped to handle certain jobs. Most of the time, those are the jobs that pay the best. This discrimination in lower income for women. Women also take on the primary responsibility for unpaid labor, so even as they participate in the paid workforce, they have extra work that never gets recognized financially.
Only 6 countries in the world give women the same legal work rights as men. In fact, most economies give women only ¾ the rights of men. Studies show that if employment became a more even playing field, it has a positive domino effect on other areas prone to gender inequality.

This course has concentrated on the question of how social problems have chilling and life-threatening effects on society which if not taken care of or eradicated in time, may have more and more generational effects. The many solutions to impoverish social problems may make a difference in the long run although the first steps have to be now!