Social equality, justice, and opportunity are important aspects that need to be promoted in any country or state. For its citizens to be happy, all these qualities should be met. A reservation system was meant to promote equitable access to very few and scarce resource in employment and education. However, educational resources and employment resources remain scarce even after this system is practiced. This presentation serves to analyse whether the reservation system promotes discrimination or reduces it. 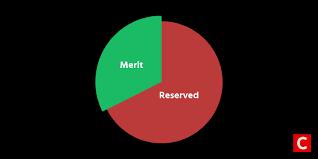 Some scholars have defined reservation as a system of affirmative action that provides representation for historically and currently disadvantaged and advantaged groups in the Indian society in education, politics, and employment. It is incorporated under Articles 15 and 16 of the Indian Constitution and it asserts that backward and lower classes of the Indian society be properly represented in public life.

According to the research done by Jean Dreze, Gopal Guru, Sukhadeo Thorat, and their associates, instead of being empowered, people who use reservations to enter the portal of education and employment suffer from low self-esteem and have problems presenting themselves in public. Privileged groups continue to enjoy more benefits than the underprivileged groups hence discrimination.

An example of how much reservations have promoted discrimination is the issue of Patidar Reservation Agitation. A successful and prosperous class in India,(the Patels), is demanding to be considered a backward class.This means reservations in educational institutions and jobs are to be made for them which in turn disadvantages the actually backward classes as they are also entitled to these reservations.

Due to reservations, India has lost so many learned people overseas as they have been discriminated in jobs.If the jobs are already reserved for a certain caste or class, even if they are not that academically ready or fit for the job, they will be employed and these disadvantages those with proper qualifications.This leads to the loss of people who can help do a better job and help in the betterment of the country.

Reservations-related riots once happened in 2006 when the reservation for other backward classes in education was significantly expanded in government institutions and the idea of it being extended to private institutions was given legislative sanctions.This fueled anger in other classes as they felt discriminated and the backward classes did not approve of the legislative sanctions being given and this resulted in riots.

Many sections of the society remain discouraged especially the Scheduled Tribe.Action has politically shifted to relative discrimination within reserved groups. As the reservation system effetively grows larger, it becomes more exclusive than inclusive hence discrimination.

Reservations are anti-thesis of equality and development.Reservations must be made so as to provide aid to those with minimal resources rather than them being provided according to caste or religion. In admission procedures and in employment opportunities, merit should be given equal importance.The process of the reservation should be such that it identifies the truly economically, socially, educationally, and politically, deprived individuals and bring them to justice.

The majority feels excluded and discriminated against since job allocations and positions in education are based on reservations. Social, political, educational, economic and employment inequality still exist even with the reservation system which was meant to prevent such. Therefore, using the above arguments, one can conclude that reservations have increased discrimination more than removing it.
Image Source
Author: Moyo Sindisiwe Londiwe