The transfer of ownership, property or business from the public sector to the private sector is termed privatization. The government halts to be the owner of the business.
The process during which all the rights of a public enterprise or business are taken over by a private enterprise (sector) can also be termed as privatization. In some of the cases company gives up its name ‘ limited’ and starts using ‘ private limited’ as its last name.

The main argument for privatisation is that private companies have a profit incentive to cut costs and be more efficient. If you work for a government run industry managers do not usually share in any profits. However, a private firm is interested in making a profit, and so it is more likely to cut costs and be efficient. Since privatisation, companies such as BT, and British Airways have shown degrees of improved efficiency and higher profitability.

It is argued governments make poor economic managers. They are motivated by political pressures rather than sound economic and business sense. For example, a state enterprise may employ surplus workers which are inefficient. The government may be reluctant to get rid of the workers because of the negative publicity involved in job losses. Therefore, state-owned enterprises often employ too many workers increasing inefficiency.

A government many think only in terms of the next election. Therefore, they may be unwilling to invest in infrastructure improvements which will benefit the firm in the long term because they are more concerned about projects that give a benefit before the election. It is easier to cut public sector investment than frontline services like healthcare.

It is argued that a private firm has pressure from shareholders to perform efficiently. If the firm is inefficient then the firm could be subject to a takeover. A state-owned firm doesn’t have this pressure and so it is easier for them to be inefficient.

6. Government will raise revenue from the sale

Selling state-owned assets to the private sector raised significant sums for the UK government in the 1980s. However, this is a one-off benefit. It also means we lose out on future dividends from the profits of public companies. 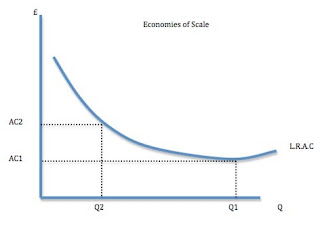 A natural monopoly occurs when the most efficient number of firms in an industry is one. For example, tap water has very significant fixed costs. Therefore there is no scope for having competition amongst several firms. Therefore, in this case, privatisation would just create a private monopoly which might seek to set higher prices which exploit consumers. Therefore it is better to have a public monopoly rather than a private monopoly which can exploit the consumer.

There are many industries which perform an important public service, e.g., health care, education and public transport. In these industries, the profit motive shouldn’t be the primary objective of firms and the industry. For example, in the case of health care, it is feared privatising health care would mean a greater priority is given to profit rather than patient care. Also, in an industry like health care, arguably we don’t need a profit motive to improve standards. When doctors treat patients, they are unlikely to try harder if they get a bonus.

3. Government loses out on potential dividends.

Many of the privatised companies in the UK are quite profitable. This means the government misses out on their dividends, instead going to wealthy shareholders.

Privatisation creates private monopolies, such as the water companies and rail companies. These need regulating to prevent abuse of monopoly power. Therefore, there is still need for government regulation, similar to under state ownership.

In the UK, rail privatisation led to breaking up the rail network into infrastructure and train operating companies. This led to areas where it was unclear who had responsibility. For example, the Hatfield rail crash was blamed on no one taking responsibility for safety. Different rail companies have increased the complexity of rail tickets.

As well as the government being motivated by short term pressures, this is something private firms may do as well. To please shareholders they may seek to increase short term profits and avoid investing in long term projects. For example, the UK is suffering from a lack of investment in new energy sources; the privatised companies are trying to make use of existing plants rather than invest in new ones.”

As India got Independence in 1947, there was a need to build a strong nation, with a government that was aware of the needs of the people of nation, which would work for their improvement and opulence. “It was hoped that a strong government would own undertakings that would create employment, and work towards the eradication of poverty amongst other problems. The decades between independence and the 90′ witnessed enormous industrialisation, where the government set up companies, and built a strong infrastructure.”

By the dawn of the 1990, the Government had sailed its boat in almost every sector, be it iron and steel, agriculture, telecommunication and automobiles.

PSU Privatisation can also be referred as disinvestment of public sector. These disinvestments are proposed by the houses i.e. Lok Sabha and Rajya sabha. When both houses of parliament sanction the proposal, then the final approval is proposed by President. These can be directly offered to the public or by bidding process.

“Previously, Here are some of the PSUs which have been fully or partially disinvested so far:

Modern Food Industries (I) Limited was incorporated in 1965. As part of the NDA-led government’s disinvestment programme, 74 percent equity shares was sold to Hindustan Unilever Limited (HUL) for Rs 149 crore in January 2000. Now the company is called Modern Foods Enterprises Private Limited and it is 100 percent owned by Everstone Capital. Its authorized share capital is Rs 240 crore and its paid-up capital is Rs 199.85 crore.

Bharat Aluminium Company (BALCO) was incorporated in 1965. The PSU played a vital role in the aluminium industry by producing household, industrial, aerospace and defence products. In 2001, the government sold 51 percent equity share of BALCO to Sterilite Industries, a company owned by Vedanta Limited (Vedanta group), for Rs 826.5 crore. Currently, BALCO is owned by Vedanta group. It has total assets of 14,387.49 crores as on March 31, 2019.

Computer Maintenance Corporation (CMC) was incorporated on December 26, 1975. The CMC was privatised in 2001, the government sold 51 percent stake to Tata Sons Limited for Rs 151 crore through strategic sale and CMC became a part of the Tata group. Later, the government divested its remaining 26.5 percent stake in CMC to the public in 2004. CMC Limited is now Tata Consultancy Services, which is one of the most profitable companies in the country. The company has reported a consolidated revenue of Rs 1,46,463 in FY 2018-19.

Indian Petrochemicals Corporation Limited (IPCL) was a petrochemicals company in India and was established in March 1969. In 2002, the government sold 26 percent equity shares of IPCL to Reliance Petroinvestments Limited (RIL) at Rs 1,490.84 crores in May 2002. Later in 2007, IPCL merged with Reliance Industries Limited.

Jessop & Company Limited is India’s oldest engineering company, established in 1788, as a private firm. Later in 1973, the company was undertaken by Bharat Bhari Udyog Nigam (BBUNL), a PSU under the administrative control of Department of Heavy Industry and Ministry of Industry, and Jessop became a subsidiary of BBUNL. In 2003, the government sold its stake in Jessop & Company Limited under the privatisation programme. The government sold its 72 percent stake to Ruia Contex Group owned by Pawan Kumar Ruia, for Rs 18.18 crore, who turned it into a profit-making entity.

Lagan Jute Machinery Company Limited (LJMC) was a subsidiary company of BBUNL. It was the first case successful privatisation of PSUs. In July 2000, the government sold 74 percent equity shares at Rs 2.53 crore. After privatisation, the company not only performed well but even introduced new products and revamped the marketing function.

Maruti Udyog Limited (MUL) was founded by the government in 1981 and the first manufacturing factory of Maruti was established in Gurgaon, Haryana, in the same year. The government in the first phase sold 49.74 percent stake of MUL in 2002 to Suzuki, a Japanese automobile manufacturer company, for 2,424 crores under its disinvestment programme. Later in June 2003, the government held an initial public offering (IPO) of 25 percent of the company in June 2003. In 2007, the government sold its entire share to financial institutions. By July 2018, the company is a subsidiary of the Japanese car and motorcycle manufacturer Suzuki Motor Corporation (which holds 56.21 percent) and had a market share of 53 percent in India.

Paradeep Phosphates Limited (PPL) was incorporated in December 1981. It was a loss-making company. In 2002, the government sold its 74 percent equity shares through strategic sale on February 14, 2002, to M/s Zuari Maroc Phosphates Private Limited for Rs 151.70 crore. Now, Paradeep Phosphates Limited (PPL) is a leading fertiliser company with an annual turnover close to Rs 5,500 crores. The government still retains a 19.55 percent equity share in the company.

VSNL was founded as Videsh Sanchar Nigam Limited (VSNL) in 1986. In 2002, the government sold 25 percent stake out of 52.97 percent in the company for Rs 3,689 crores to Tata Group. Later, Tata Group acquired a 45 percent stake in VSNL. VSNL was completely acquired by the Tata Group and renamed as Tata Communications on February 13, 2008. In FY2017-18, Tata Communications posted an annual revenue of Rs 17,095 crores. The government still retains a 36 percent equity share in the company.”

Recently, Government had announced to disinvest in 23 PSUs. These are:-

IS PRIVATISATION GOOD OR BAD?

“There are no easy answers to this question. Privatisation leads to creation of wealth. The cost of production is reduced and profits are maximised. It is certainly a good step if the government feels that a particular sector can be opened up to competition and it will benefit the market and the consumer. However, this does not hold true always. Sometimes, it also leads to corporate monopolies as the big assets created by the government are handed over to a bunch of corporates. At the same time, PSUs have an important role to play in the economy. Because PSUs can never solely be driven by the idea of creating wealth, they cannot be compared to the private sector. The government starts business ventures/PSUs to provide employment to people and have a presence in areas where the private sector wouldn’t go because they do not make commercial sense. Because these companies are responsible for social welfare, they have a larger workforce when compared to the private sector. Therefore, despite the fact that the cost of production is high, PSUs cannot be done away with. The ideal way to proceed, for any government, would be to go for privatisation with a view to bring in more competitors and bring in reforms to make the public sector more efficient.”