As we can see that recently in Poland women have been protesting as the Poland Constitutional Tribunal has ruled that an existing law allowing women abortion of malformed foetuses as unconstitutional which had provoked an outcry from women and activists. This decision by the court in Poland restricts women’s right to access safe and legal abortions. Let us read about it further. 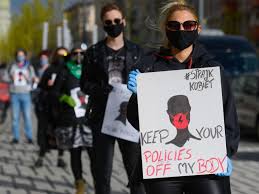 Abortion as the name suggests can be defined as the termination of pregnancy by various methods, including medical surgery before the foetus is able to sustain independent life.(1)
Abortion that occurs without intervention is known as a miscarriage or in other words as “spontaneous abortion” and occurs in approximately 30% to 50% of pregnancies. When deliberate steps are taken to end a pregnancy, it is called an induced abortion, or less frequently “induced miscarriage”.(2) Abortion can also be called as “termination of pregnancy”.

In Poland the 1993 abortion law permits the termination of pregnancy on the grounds of foetal defects to women.

The laws which were made in 1993 are already considered some of the strictest laws in Europe and after the enactment of the court’s decision, permission for abortions can only be given in cases of rape, incest, or if there is a threat or danger to the mother’s life.

Reason for protest or the present law :

The Constitutional Tribunal of Poland ruled that an existing law was unconstitutional because the Polish constitution assures a right to life and the abortion based on a foetal malfunction was a directly forbidden form of discrimination.

It was held by the tribunal that permitting abortions in the case of foetal deformities legalised “eugenic practices with regard to an unborn child, thus denying it the respect and protection of human dignity.”
Eugenics can be defined as the practice or advocacy of improving the human species by selectively mating people with specific desirable hereditary traits.(3)
It aims to reduce human suffering by “breeding out” disease, disabilities and so-called undesirable characteristics from the human population.

Protesting against the abortion curbs is not new in Poland as earlier in 2016 too, thousands of women went on strike in protest against a draft law for a complete ban on abortions.

The draft law was proposed by an anti-abortion citizens’ group and was initially supported by the Catholic Church. It suggested stringent punishments like jail up to 5 years for the women and also the doctors performing the abortion.
However, the Church later backed out when bishops said they could not support the proposal to jail women who underwent an abortion.

What does the court’s decision mean for the people of Poland ?

As per report of BBC, fewer than 2,000 legal abortions are carried out in Poland every year out of which the majority of abortions due to foetal defects is more.(4)
Further, only 2% abortion cases due to rape, incest or where there is a great to the mother’s life are there. So that’s why the ruling essentially translates to a near complete ban on abortions in Poland. (5)
It was also estimated that 80,000 – 1,20,000 women of Poland either go abroad or seek illegal termination of pregnancy or abortions every year because there exists the strict laws or the stigma in Poland.(6)
After looking all this it is feared that the number could increase if terminations due to malformed foetuses are outlawed.

In India abortions are regulated by the Medical Termination of Pregnancy (MTP) Act, 1971(7).
As per the law (section 3 of the MTP Act 1971),(8) the doctor can perform an abortion in the following conditions:

In January 2020, the Union Cabinet approved amendments to the MTP Act, allowing women to seek abortions as part of the reproductive right and gender justice.
The amendment raised the upper limit of MTP from 20 weeks to 24 weeks for women including rape survivors, victims of incest, differently-abled women and minors.

Regional and global organisations like the Council of Europe, Amnesty International, the Centre for Reproductive Rights and Human Rights Watch criticised the ruling of the tribunal.
The Council of Europe immediately condemned the abortion ruling. Its commissioner for human rights Dunja Mijatovic called it “a sad day for #WomensRights”.