Reliance has established itself as the most premium brand in almost all the sectors it has entered to date. Reliance enjoys great profits from telecom, petroleum, and recently from the retail industry. Moreover, in the past passing months, a great number of investors such as Google, Facebook, and Silverlake who have deep pockets have invested in Reliance Industries. 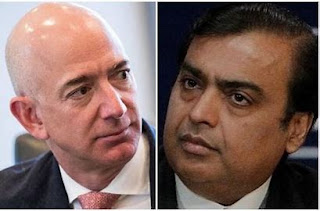 This shows that investors have deep-rooted trust and confidence in Reliance. Along with the investment, the competition for Reliance has also increased. For instance, in the telecom industry, Airtel and VodafoneIdea are giving great competition to Reliance Jio, whereas in the retail industry, DMart, Amazon, and Walmart are giving great competition to Reliance Retail. Now, the main focus is to expand the retail industry of Reliance and the biggest retail deal of 26k crore to achieve that goal.

Recently Reliance has acquired Future Group’s business which is a retail and wholesale business that is commonly known as Big Bazaar, Fbb, Easyday, and Central.

The retail segment of Reliance is not available in all the cities but Big Bazaar can be found in every city and small towns. Thus, on the success of this deal Reliance Industries Limited will receive accessibility in 1800 stores nationwide and DMart will face a huge crisis. On the completion of this deal along with Big Bazaar, Fbb, Easyday, and Central there would be products of Reliance Fresh and Reliance Trends. The transaction of Reliance Industries Limited with Future Group will strengthen Reliance retail which is already the largest retail sector of India in terms of stores.

The War between Amazon and Reliance

Amazon challenged this deal between Future Group and Reliance Industries. It took Future Group to Singapore Arbitration Forum over the Reliance Retail deal.

Singapore International Arbitration Centre (SIAC) gave the judgement in the favour of Amazon and the deal between Future Group and Reliance Industries was put on hold.

Arbitration and Conciliation Act, 1996 has no express provision for an interim order passed in a foreign seated arbitration. Moreover, Reliance Industries and Future Group do not comply with this judgement of Singapore International Arbitration Centre (SIAC) as it is not binding nor enforceable in Indian Courts. In this case, Amazon can file a suit in High Court under Section 9 of the Arbitration and Conciliation Act, 1996 which is for granting interim measures.

Thus, the biggest retail deal that happened in October 2020 in which Reliance acquired Future Group for almost a whopping Twenty-six thousand crores. But this deal was interrupted by Amazon recently as indirectly it also holds a small in Future Group. There was a condition between Amazon and Future Group that the latter cannot sell it to Reliance according to the agreement.

It is evident to all that Amazon obviously does want Reliance to take over the retail market in India. There has been a tussle ever since between Amazon, Reliance, and DMart for India’s retail and e-commerce market. Now it will be interesting to see whether this deal between Reliance and Future Group is given a green signal or not in India.