Plea of alibi means that the absence of the time when the commission of the crime committed by the accused and the accused is convicted of the offence at the place where the incident has happened.
The term “Alibi” is a Latin word which means – elsewhere or somewhere else. 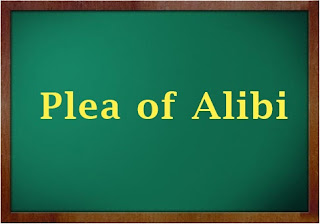 The plea of alibi is generally used in criminal law or criminal offence by the complainant against the commission of an alleged crime done by the accused. When the defendant pleads in the front of the court with the plea of alibi and the accused try to prove itself that when the crime has committed at that time the accused is somewhere else, he has presented another place during the offence had been done. In the simple word, we can say that the accused was not physically present at the scene of the crime[i].

The fundamental rule says that the burden of proof in the criminal cases always lies on the accused to show or prove itself that accused was not present at the time of offence and did not involve in Section 103 of the Indian Evidence Act, 1872.
The Plea of Alibi deals with Section 11 of the Indian Evidence Act, 1872. It talks about that the accused will have to provide the relative evidence to prove that accused was so for the scene of the crime any the time of the incident happened[ii]. The accused was not committing any crime, and he is not liable for any offences.

Who may take a plea of alibi?

In a general sense, we may assume that at the time of the commission of the alleged crime, the accused of an actual offence must register his presence elsewhere[iii] and on the behalf of the court assume that the accused was not involved in the crime.

Essentially of the alibi-

Some of the ones to be followed, in general, are:
1. It needs to be a felony punishable by statute.
2. The one who argues the alibi must be convicted of the crime.
3. This is a defensive plea in which the defendant claims that the crime was committed elsewhere.
4. This claim must be proven beyond reasonable doubt that at the time of the act of the crime, and accused must to be physically present at the place of offence/crime.
5. The petition must file by the offender and proof that supports on the behalf of the defendant’s argument.

Raising of a false plea of alibi by the accused

We also found that, in the criminal proceedings against the accused, if the defendant raises a false plea of alibi as a defence in the case. Giving false alibi evidence leads to the accused’s suspicious act, and the court will be more vigilant in the case ‘s trial. When a false alibi plea is presented, it also changes the investigation process.

Is alibi a good defence or not?

The aim of the alibi is not to authorised or show anything, but it may be merely to generate some doubt in the judge’s mind that the accused was not available at the place of the crime.
If this appeal is made with clear and independent evidence in preliminary hearings, the accused are more likely to be convicted or emancipated. In this case that it is a claim to create fair doubt in the court that whether the accused is a wrongdoer of the offence or not, the statement of alibi is not substantive.

In Sahabuddin and Ors. vs. State of Assam[v], Hon’ble Supreme Court held “Under the Section 313 Code of Criminal Procedure, the accused does not give any explanation in his statement. The accused must prove that the Court disbelieves the plea of alibi and it also bound to draw an adverse inference against the accused”
Explaining the essence of a plea of alibi, it was observed in the case of Dudh Nath Pandey v. State of U. P[vi].that:
“The plea of alibi comes under the physical impossibility of the accused that accused was present at the place of crime by the reason to believe that his presence at another place. The plea of alibi can only be entitled that it is clearly shown that the accused was a presence so foe the place of crime at the relevant time and he was not present at the place where the offence was committed”

In Sk. Sattar v. State of Maharashtra[vii], it was held that “plea of alibi has to be proved with the absolute certainty of facts to show that the complete possibility of the accused was not present at the place of crime at the relevant time when such crime happened”

This was more elaborately explained in Binay Kumar Singh v. State of Bihar[viii] in the following words:
“We must bear in mind that an alibi is not an exception (special or general) envisaged in the Indian Penal Code or any other law. It is only a rule of evidence recognised in Section 11 of the Evidence Act that facts which are inconsistent with the fact in issue are relevant.”
“Alibi” is the Latin word, which means that “elsewhere” and it is used to convey to the court that when an accused takes the option to a defence that he was so far away from the place of offence and it is clearly stated that its uncertain that accused have involved in the crime”.

Mostly in criminal cases, we found that that accused caused physical injury to another person. The burden of prove always relies on the prosecution’s side that the accused was available at the place and he fully involve in the offence. In the case of the burden of proof, it could not be taken into consideration on the behalf of the mere fact that the accused has taken defence of alibi. In such circumstances accused need to be taken consider only when the burden of proof is completely removed by the prosecution satisfactorily.

It should be emphasized that only because the alibi was argued by the defendant, the probability of the defendant committing a crime in some way decreases or burdens the defendant with the burden of evidence to prove his / her alibi.

Beyond every reasonable doubt and with clear supporting evidence, the accused must justify his plea. And then will it be admitted in a criminal trial by the judge. It is necessary to state that the prosecutor would have to prove separately that the accused has committed the crime since an accused is deemed “innocent until proven guilty” according to the law in India.