“This Bloody Line” -Sir Daniel Radcliffe, in an unusually candid moment of reflection on
the borders drawn between India and Pakistan.

On August 4th, 2020, Imran Khan, the Prime Minister of Pakistan unveiled a new map claiming the entire region of Jammu and Kashmir, Junagadh, and Sir Creek. While India currently faces map-related issues on two other fronts following the map India released in November last year, Pakistan’s issues come in conjunction with them. After India and Nepal, Pakistan became the third country to introduce a new political map recently. 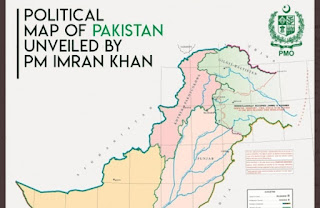 The assertions of Pakistan are unreasonable and unjustifiable, contrary to several understandings, international conventions, and treaties. The Ministry of external affairs of India called the exercise ‘politically absurd’.
This article whilst seeking to be informative is a humble attempt to critically analyse the new political map and the assertions of Pakistan in that regard.

Ironically one day ahead of the anniversary of the abolition of Article 370 of the Indian Constitution, that divested the state of Jammu and Kashmir of its autonomy scrapping its special status, a new political map was unveiled by the Prime Minister of Pakistan, Imran Khan, on the 4th of August 2020 claiming the whole of the disputed region of Jammu and Kashmir and parts of Gujarat as the nation’s own. The disputed region has been labelled as ‘Indian illegally occupied Jammu and Kashmir’. The move comes after India released a map in November 2019 reiterating its claims on Jammu and Kashmir, and Ladakh, which could have possibly triggered the Pakistani Government. While addressing the nation, the Prime Minister of Pakistan stated that “Kashmir will become a part of Pakistan and this map is the first step towards it” and also said it was endorsed by the cabinet, opposition and Kashmiri leadership. [i]

Article 370 was abrogated unilaterally by India depriving the territory of Jammu and Kashmir of its semi-autonomous status. The unilateral decision of India in the region was indeed controversial and it was held by the Indian Government that article 370 neither stood abrogated nor removed but ‘inoperative’ even though it was still present in the Constitution of India. By means of the new political map, Pakistan demanded the implementation of the resolutions of the United Nations Security Council (UNSC) in Jammu and Kashmir in their true letter and spirit, giving the Kashmiri people their right to self-determination. The map, in addition to claiming the whole of the territory of Jammu and Kashmir, also included Junagadh, a region in Gujarat and Sir creek. A claim line was left at the eastern end of Jammu and Kashmir that indicated the willingness of Pakistan to make China a third party in the Kashmir issue. The Kashmir Highway in Pakistan was renamed as Srinagar Highway. The Federally administered Tribal Areas (FATA) have also been shown as a part of the Khyber Pakhtunkhwa province. The map also included the ‘Siachen Glacier’, on which, both the countries had reached an impasse. Unveiling the map, the Pakistan prime minister assured that “we will do political struggle, we don’t believe in military solutions.” [ii]

Pakistan’s new map comes after its numerous attempts to internationalise the matter of the abrogation of article 370, which revoked the special status of Jammu and Kashmir, dividing the state into two union territories. The Ministry of External Affairs of India disregarded the map by calling it an exercise in “political absurdity.” The Ministry in its statement said, “this is an exercise in political absurdity, laying untenable claims to territories in the Indian State of Gujarat and our Union Territories of Jammu & Kashmir and of Ladakh.”[iii] The ministry also stated that the move confirms the reality of Pakistan’s obsession with territorial aggrandisement supported by cross-border terrorism.

WHY WAS PAKISTAN’S NEW MAP LABELLED AN ABSURD EXERCISE?

The territorial claims of Pakistan are unacceptable and challenge many of the past understandings and treaties. The map also claims the undisputed territory of Junagadh. The following are some of the reasons why Pakistan’s exercise is ludicrous:

Pakistan had lost its claims in the arbitration conducted in Geneva regarding the position of Sir Creek, a 96 km long water strip in the marshlands of the Rann of Kutch that opens into the Arabian Sea. It borders the Indian state of Gujarat and the Pakistani province of Sindh. An accepted principle of International Maritime Law, the ‘Thalweg Doctrine’ states that if a river body is navigable throughout the year and has boundaries between two states, it shall be divided in the middle. The arbitration granted the entire Rann and the marshy areas rich in biodiversity and mangrove forests to India while it left the solid land across the Rann to Pakistan.[iv] The new political map seemingly reasserts Pakistan’s claims over the area and by demanding to shift the demarcation towards the eastern bank, Pakistan appears to go back on the spirit of the Rann of Kutch arbitration as well.

The map lays a claim on Junagadh, a part of coastal Gujarat. In February 1948, the two princely states of Manavadar (presently a city in Junagadh) and Junagadh officially became a part of India following a referendum conducted over the issue of joining India or Pakistan in which the population overwhelmingly voted in favour of joining India. In September that year, Indian troops marched into Junagadh incorporating it into the Indian territory.[v]

Pakistan’s claim as to the territory of Ladakh is unclear. The claim of Jammu and Kashmir, but not Ladakh, goes against its own commitment to adjudicate the future of all six parts of the erstwhile royal state of Jammu-Kashmir (Jammu, Kashmir, Ladakh, Gilgit-Baltistan, PoK and Aksai Chin) with India.

The world’s highest battlefield and the Second-longest glacier in the world’s Non-Polar regions- the Siachen Glacier, has been claimed by Pakistan as well. The Glacier is a part of the Union Territory of Ladakh and is in the Eastern Karakoram Range of the Himalayas, northeast of the Point NJ9842, where the Line of Control between India and Pakistan ends. The claim of this region by Pakistan seems rather regressive as both the nations had reached an impasse regarding the matter.
Therefore, the proclamations of Pakistan neither have legal validity nor international credibility[vi] as they are clearly against previous understandings, international treaties, and conventions.

Pakistan’s recent move has been subjected to a lot of criticism. The claims of Pakistan are indeed audacious. The map is suggestive of cartographical warfare calling for diplomatic battles in the absence of a military. It is highly likely to lead to changes in the position of territorial disputes between India and Pakistan. Pakistan’s Kashmir discourse stands seemingly changed as the new map has laid claims on Jammu and Kashmir entirely, predominantly including the Jammu region.

The territorial sovereignty of India stands questioned upon the inclusion of Junagadh and Manavadar in the recent map. At this juncture, it is highly likely that Pakistan would assert its claims over the former princely state of Hyderabad as well. The accession of Junagadh and Manavadar to India was accepted by Pakistan. Therefore, a whole new dispute has been opened by way of the map.
Furthermore, the unilateral claim of Pakistan over the disputed areas is not salutary and has made it unfavourable to arrive at future resolutions. Therefore, Pakistan’s act must not only be questioned in India but in that nation as well.

India currently faces map-related issues with Nepal, regarding the Kalapani and Limpiyadhura regions and with China over the line of actual control in Ladakh, following the release of its new map in November 2019. The Nepal Government also issued a new map in November, last year, in that regard. Therefore, Pakistan is the third country to introduce a new political map following India and Nepal.[vii]

However, it is to be noted that the claims of Pakistan are unjustifiable as they are of a far greater extent and challenge many of the past understandings and treaties. Even though the issues brought about by Pakistan’s new map are completely on bilateral matters, they come in conjunction with the map-related issues that India is currently facing on two other fronts. Albeit for different reasons, it is rather unconvincing that the objections given by the three countries to the map released by India last year were a coincidence.
The move of Pakistan is visibly an intentional provocation of India, seeking to internationalise the border disputes. Therefore, the capital must be well-prepared to deal with the three-pronged challenge in the coming months on an international stage as it has become apparent.

This blog is authored by Saradha Devi A student at School of Excellence in Law, The Tamil Nadu Dr. Ambedkar Law University