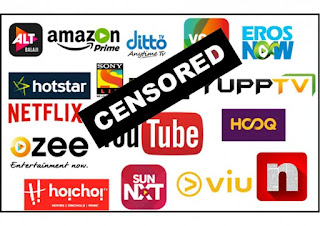 OTT means “over the top”, this platforms has witnessed a tremendous increase in viewership and an impeccable growth in this modern era. India has witnessed a lot of growth in OTT platforms, The reason behind this tremendous growth is due to the internet becoming cheap and deeper internet penetration of watching new shows and movies. According to some reports it is expected that the business of OTT platforms would rise by 4,000 crore by 2025. This OTT platforms have started their services as content hosting platforms, however they have created a separate categories of their platforms where some of the shows are under the lines of “ORIGINALS”. In India first OTT platform was launched in 2008 by Reliance Digital which was named as “BigFlix”. The revenue income generated by OTT’ over the years has been immense, especially in India which has reported that the video revenue in the year 2017 was 2,019 CR. It has been noticed that the pace by which India is switching over to OTT platform it will outperform global OTT vend.OTT platforms work according to the Subscription which means the end user has to subscribe to one of plans to enjoy the streaming services. OTT platforms not just provide movies, television shows, or web series but even live streaming of sports event has been a major factor for increase in consumption of OTT platforms.

In India there have been various Instances where the government has intervened to settle out matter according to their own way of making things done. OTT platforms are next in line of getting laws and being regulated on the basis of it.

There are around 40 OTT platforms service providers in India, Last year in September 2020 this OTT platforms were not at all regulated, IAMAI the body representing this various platforms has come up with and self-regulatory code. Thus the self-regulation code was signed in September 2020 and after that a PIL was filed in Supreme Court which was regarding regulation of OTT platforms such as Amazon and Netflix. A notification was passed by Ministry of Information and Broadcasting which stated that all audio-visual content would come under them, Government did not support the self-regulatory code but came up with the rules under Section 67 of Information Technology Rules, 2021 for both digital and non-digital OTT platforms. And these rules will be really strict and proper actions are set to be taken against any content that is against state, infringes friendly relations with foreign nations and disturbs public order.[1]

The censorship is mainly done by Government and it is a way of suppressing the flow of Information by the government officials in some cases artists are threatened to put down the information by the government, it is way by which the ideas are restricted which could have been available to the normal public at large.In India censorship works according to the act legislated by the parliament of India which is specially legislated for the purpose of censorship which is named as Cinematographic Act of 1952[2]and Cable Television Regulation Act 1995. [3]This act in turned led to the significant working of The CBFC known as “The Central Board of Film Corporation”.  The issue of Censorship in film reached in Supreme Court in the case known as “K.A. Abbas v. Union of India”. The Supreme Court in this case held that:

“A motion picture has the ability to stir up more emotions deeply than any other product of art. A film can therefore, be censored on the grounds mentioned in Article 19(2) of the Constitution”.[4]In other case decided by Apex Court called S. Rangarajan v. P. Jagjivan Ram, the apex court held that “the standard to be applied by the Board or courts for judging the film should be that of an ordinary man of common sense and prudence and not that of an out of the ordinary or hypersensitive man”[5]

OTT platforms have not been regulated for a long time and after the signing of regulatory code by all OTT players, the government has refused to provide support to this code, due to non-regulatory of OTT platforms it gave more freedom to content creators to be more creative with the approach. India is an democratic country and everyone has a right to express one self, the self-regulatory code was an sensible approach for self-censorship but instead of imposing rules will hamper the creativity of this content creators, The code provided the audience the discretion to watch whatever they want to. We have a fundamental right of freedom and expression guaranteed under article 19 of the constitution, thus the OTT players need to be responsible for their content and should not misuse them. CBFC has been in play and films and shows which are censored by CBFC, thus they cannot show every content but through this online platform they can release content relating to things which are in general public and they must be known. In India there is Information Technology Act which is made to deal with explicit content so there is no need to make separate rules and regulations for the same. The non-censorship of OTT platforms is what it makes different from theatres, and censoring them will lead to slipping away in Investment opportunity.

There must be a balance sought to be achieved totally censoring the telecast shows leads to the outrageous violation of freedom, balance of integrity, the effective regulation of the OTT platforms must be done keeping in mind the freedom of expression.At last it should be consumers or audience who should be given free hold to choose what they want to see and what they do not want to, the nexus achieved through this guideline is not simply able to cater the need of the hour. Self-regulation must be given to the creators and they must be given the choices to show what type of content and to what kind of audience at last if the regulation imposed by the government is not an attempt to silent the OTT platform regulations than it must be enforced keeping in mind the consumer need and their choices and not according to the government choice. If this platforms are allowed to be regulated by themselves they will reach to a new heights, these platforms can be a source of employment and generating income for someone too. Preventing this OTT platforms will lead to fall in our society. As they have come up with self-regulatory code it must be followed in it’s truest way possible and this code is far better than the censorship of OTT platforms

This blog is authored by Vinish Maheshwari, a student of Gujarat National Law University.