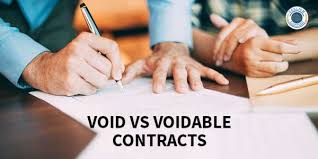 In the twenty-first century, tremendous growth and development have taken in trade and commerce. With the development of trade and commerce, a combination of different principles is used to fix the rights and obligations of the parties involved. In India, the rights and obligations of the parties involved in such a contract related to commercial law are laid down in The Indian Contract Act, 1872. It also lays down the legal remedies available to the aggrieved parties entered into the contracts. Any party failing to honor its part of the agreement could be actioned upon due to a binding contract. Hence they give a legal framework for the formation and execution of a contract in India. There are two types of contracts- valid and invalid.

S. 10 of the ICA, 1872 provides for the constituents of a valid contract. An invalid contract may be of two sub-types, void and voidable. It hence becomes important to know the comparison between the two.

A void contract is not valid. Section 2 (g) of the act, 1872 says defines void.Thus, a void agreement is null from its beginning and no rights are conferred upon parties.As the parties are not bound by the terms of void contract, any of the parties cannot be sued due to the breach of contract and no remedy is available in such a case.

WHAT MAKES A CONTRACT VOID?

A void contract means that the contract has no power or effect, so no party is bound by it and no party can rely on it. Usually, this is because:

This provision states that if the contracting parties are under a mistake of fact (matter of fact) important to the agreement, it is void due to bilateral mistake.

If the consideration or object of the contract is illegal, then the agreement does not apply as it defeats the provisions of the law. This applies to contracts that the court may consider unethical or in conflict with public policy, such as fraudulent agreements, which may result in financial loss to a person. However, if the legal part of the contract is separated from the illegal part, then the legal part can be enforced in a court of law.

This section provides that the contract without consideration will be void unless it is a gift made out of natural affection; it is a debt.

These sections provide that the agreement, the terms of which are uncertain, based on uncertain events, or based on impossibility, does not apply except in certain circumstances such as that of horse racing.

Voidable contracts are legal and enforceable in courts.  Section 2 (i) of the act gives light on voidable contracts. One or both parties may terminate the contract at any time under normal circumstances. Contract enforceability is void when one person is minor and not capable to enter into a contract. This is always the case when one does not have the mental capacity to enter into an agreement. Others are simply void if one of the parties did not enter with free will or consent, be deceived, or coerced. Incapacity does not provide for a voidable contract, and if the courts find this, such contract becomes null and void.

WHAT MAKES A CONTRACT VOIDABLE?

Voidable contract binds only one party; the other party may choose to reject or accept it. A contract becomes voidable under various circumstances, including:

2.      Preventing from performing the obligation (Section 53)

Reciprocal promise based contracts and situations where and one of the parties prevents the other from fulfilling its obligations under the contract makes it voidable.

When a party rescinds a contract no obligations are required to be performed while the other party must be fulfilled with the benefits which according to the contract must be received.

DIFFERENCE BETWEEN VOID AND VOIDABLE CONTRACTS

With a void contract, it does not work from the beginning. In this case, no party can enforce a void contract as it is considered that the contract has never existed. With a contract voidable, it is not invalid until one party submits a valid reason to revoke or cancel it. Thus until any legal objection is raised by any of the parties, the contract may remain in force.

If one party uses a strategy such as fraud or coercion, the contract will become voidable. With a void contract, the contract cannot be operated solely by both parties’ consent to the agreement, as you cannot commit any illegal activity. Voidable contracts may be enforced if the parties agree to give up their redemptive rights.

Few instances of void contracts can be prostitution or gambling. If a person enters into an agreement and is suffering from a serious illness or mental illness, it will be in vain because the party did not have the legal capacity to enter into the contract.

The provisions of sections relating to void and voidable contracts under Indian Contract Law are not only simple but have great clarity as well. The fact that this law applies to this day, without the need for amendment stands as proof of its nature. It takes a defensive approach to contract law in the sense that it protects people from fulfilling irrational, illegal, and immoral obligations. The provisions surrounding void and voidable contracts may provide for a non-binding agreement, thus rendering it invalid. Legislation on this issue strikes a balance between the flexibility and severity of its application as it can be consistent with the facts of the case while maintaining its terms and conditions.

This blog is authored by Aditi Vishnoi, a student of The ICFAI University, Dehradun.