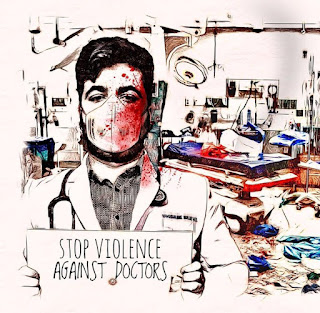 Since the country has been attacked by pandemic, on several occasionsvideos have surfaced with on-dutydoctors and healthcare professionals getting inflicted with violentoutbursts of patients and their attendees. Indian Medical Association conducted surveys which bringout the statistics that 75% of the doctors have faced violence in their professional life in some form and 62.8% see their patients with a fearful mindset.[1]This article throws light on the existing legislations and judicial decisions that address the violence against healthcare professionals. Further, the article also provides for balanced suggestions to improve the situation.

Judicial approach to such violence

The Supreme Court in JerrylBanait v Union of India[2], has recognized the graveness of COVID 19 pandemic and puts the responsibility on the citizens to act in a reasonably and responsibly which enables doctors and healthcare professionals to perform their social and moral duty to fight COVID 19. The court also said that it is the responsibility of the state administration to take action against any person who hinders the service of healthcare professions. The government must provide sufficient security to the medical staff. Also, the focus should be on a sufficient supply of protective gears and immediate medical gear for fighting the disease.

In AzraUsmail v. UT of Jammu and Kashmir[3], the court observed that acts of violence create a hindrance in the duties of healthcare professionals leading to spread of virus, puts the lives of doctors in danger and court ordered to look into the grievances of family members of healthcare workers.

There are several cases, most of them where courts have recognized the duty rendered by healthcare professionals and ordered for their adequate protection.

Analyzing the existing legislations concerning the violence against healthcare professionals

There is no specific law that essentially deals with violence against doctors and healthcare professionals. In such circumstances, Indian Penal Code, 1860 (hereinafter IPC) is taken as a resort for cases of harm to body and property. There are state-specific laws that criminalize such acts of violence. But the surveys conduct by medico organizationssuggest that the prosecution under these laws is very low, cases of violence are not reported as FIRs, judgments of cases point out to bails grants and fines rather thanprosecutionunder the laws.[4]

The “Healthcare Service Professional and Clinical Establishments (Prohibition of Violence and Damage to Property) Draft Bill” was the first attempt by the health ministry to specifically deal with violence against healthcare professionals. However, the bill was dismissed by the home ministry stating what the bill defines as acts of violence are already covered by IPC and Criminal Procedure Code, 1973.[5]

Another legislation that dwells into the matter of violence against healthcare professionals is the “Epidemic Diseases (Amendment) Act 2020” which is the amended version of “Epidemic Diseases Act 1897.” It defines “acts of violence”, which is committed by any person against healthcare personnel, which causes or may cause,harassment, harm, injury, danger of life, hindrance to service or damage to any property. The act gives wide interpretations to the definition of “healthcare service personnel” and “property”. Section 3 of the act is the provision for violence and punishment in such cases. Section 3(2) deals with commission or abetting the commission of violence against healthcare personnel or property. Section 3(3) incorporates grievous hurt as under section 320 of IPC. The offences are all made cognizable and non-bailable.The act provides for who will inspect thecomplaints and period for the completion of the investigation, i.e., thirty days from the registration of FIR. The trials are to be completed expeditiously and in cases of failure, the court will record the reasons and may extend the time to not more than six months. For the acts of violence as mentioned in the act, the courts take the presumption of the guilty committing such offence unless the contrary is proved without reasonable doubt by the accused. Along with punishment, the act also provides for compensation which the convict is liable to pay. Compensation cases of damage to property will be twice the fair market value of damage and loss.[6]

Comments on the insufficiency of legislative framework

The said act was first introduced as an ordinance and later converted into an act. Although the needful amendments have been made, it needs to be realized that the original act is a pre-independence legislation and now the circumstances have changed, for example, deadly pandemic, global connectivity, increased communication and urbanization, increased population, etc.To accommodate the changes,we need modern legislations that take into considerationthe aforementioned and other relevant factors.

Although the legislation is yet to be enforced by all states, there are certain limitations to the act which make it insufficient for long-term application. Firstly, the act is centered around epidemics only, which makes its general application a grey area. The act presumes acts rea and mens rea towards the accused. Though such presumption is rebuttable with proper evidence and might be beneficial amidst pandemic, but its long-term application can prove to be harmful for innocent citizens in many cases. In many cases, the violence is a result of negligence on the part of healthcare professionals, disappointment, and sadness over the loss of a loved one. This is definitely not true for every case of violence but a presumption of “culpable mental state” is unreasonable and unfair to an impartial trial. Just amending the legislation is not enough, proper implementation is necessary. As stated above, the Indian police and justice system doesn’t seem to give appropriate direction to the legislations resulting in very low cases being registered and parties missing out on fair punishment and compensation.

Way ahead and concluding comments

Violence against doctors is not a pandemic phenomenon, it has been taking place for a long time and has its roots in social, economic, and legal causes. The issue can be addressedat various levels with the active participation of the stakeholders.

The government has to provide citizens with effective and affordable healthcare facilities which reduce the mental and financial burden for the patients and their families. Health infrastructure needs to be given importance with improvement in doctor-patient ratio and adequate medical education.Media needs to evaluate every case and present facts to the people, instead of controversies.

A big chunk of responsibility falls on citizens to understand the medical conditions of the patient and how doctors are diligent in performing their duties to get the best out of the situation. They need to understand that any dissatisfaction in services is to be resolved in a civilized manner. People should be made aware that vandalism and violence in hospitals have major legal repercussions.

A comprehensive legal framework is the need of the hour which adequately covers every medical service, both government and private medical setups need to be brought under the same legislation for uniformity, it should cover normal circumstances for long-term application, changes in modern times should be accommodated well. A hurdle in this matter is healthcare enlisted in the state list, however protecting healthcare professionals which enables them to perform their duties served national interest, hence, the parliament can resort to Article 249 of the Indian Constitution to formulate a central law.Apart from framing the legislation, its implementation needs to be given importance for it being a success.

“This blog is authored by Aditi Kundu, a first-year student of Hidayatullah National Law University, Raipur.”

[1]Pandhi, N., 2021. Behind the Violence Against Healthcare Workers in India Lies a Failed System. [online] The Wire. Available at: <https://m.thewire.in/article/health/behind-the-violence-against-healthcare-workers-in-india-lies-a-failed-system> [Accessed 8 July 2021].