The term ranking means a position in hierarchy or scale. Every year the World Economic Forum, many qualified consultancies, globally recognized economists release a list of various rankings of the countries in various fields and categories. 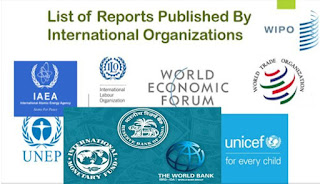 These lists, releases, and publications help a country analyze its true position and work towards its goals by marking a loophole and setting forward a target.

In this index 139 countries were analysed and scored based on their businesses, infrastructure, and natural resources. This index was topped by Spain whereas India ranked 34th in the Travel Tourism Competitiveness Index (TCCI) of the World Economic Forum (WEF).

This index deals with visa-free travel options and easy travel. In this index, Japan ranked first which has the strongest passport in the entire world, followed by Singapore, Germany, and South Korea. Whereas, India ranked 84th position in this index.

It deals with the media freedom given to the journalists of a country. In this index, there were 180 countries as a participant out of which India achieved a position of 142nd among all. This index was topped by Norway followed by Finland.

This index measures a country’s or region’s peacefulness. As per the recordings of this index the peacefulness of the world is not in a good position. This index states that Iceland ranks 1st position in the world in terms of peace and India stands at 139th position.

The democracy index highlights the independence of 165 independent states which is compiled by the Economist Intelligence Unit. It was topped by Norway and in 2019, India ranked 51st position in this index.

This index was topped by the Council of Scientific and Industrial Research (CSIR) which is India’s biggest research and development organisation, the top subjects attached to its research were chemistry, physical science, earth & environmental science, and life science. Indian Institute of Science (IISc), Bangalore ranked 2nd in this field.

This year Forbes released the top 100 highest-paid athletes in which Indian skipper Virat Kohli is the only cricketer to feature in this list whose ranking is on the 66th position with an estimated earning of 26 million dollars. Also, Switzerland’s tennis player, Roger Federer has topped the list whose estimated earning is 106.3 million dollars of the world’s highest-paid athletes.

Swiss National Bank (SNB) released this list stating that the United Kingdom ranked 1st followed by the United States and West Indies respectively. India ranked at 77th position in terms of money parked by its citizens.

This report is released by U.S based property consultants Kushman and Weikfield. This consultancy analyses every country based on four major aspects that are bounce-back ability, conditions, costs, and risks. India is the 3rd topmost country on this list.

Jones Lang LaSalle released its biennial Global Real Estate Transparency Index (GRETI). It acts as a guide to the companies that operate in the foreign market. In this index, India ranks 34th and the United Kingdom is at the 1st position.

This is a yearly report which is published by the World Economic Forum(WEF). Every country works for the prosperity of its citizens and this index assesses the ability of all the countries in increasing their citizens’ prosperity on the basis of which country uses its resources at its best.
In this index, Singapore replaced the United States and is currently at the 1st position, whereas, India is at the 68th position.

The World Economic Outlook is released by the International Monetary Fund (IMF). This report analyses the economic developments and policies of all the member countries of the IMF.
This report is generally prepared twice a year, and India became the 5th largest world economy in 2019. Moreover, China is the largest economy in the world in terms of GDP in PPP.

This index was jointly created by Simeon Djankov and Gerhard Pho who are among the top economists of the Central and Eastern Europe World Bank Group. This list is topped by New Zealand and India is at the 63rd position.

Indian national team has moved up to a rank of 104th in the latest Fifa ranking. Whereas, previously India was at the 108th rank. The top six ranking countries are Belgium, France, Brazil, England, Portugal, and Spain.

In this index, India ranked at the 48th spot with a score of 35.59, whereas, Switzerland ranked 1st with a score of 66.08. This is the 13th edition of the Global Innovation Index (GII) which is released by the World Intellectual Property Organisation, Cornell University, and IBS.

Hence, the lists, releases, and publications help a country grow and know about its true position worldwide. These lists also motivate the government and its citizens to improve themselves to make their country proud and achieve positive recognition globally.