In the 21st century, money has become a necessity in the life of a human being. It is used for the development of a nation, to live a more comfortable and peaceful life, etc. Just like money, debt is also a crucial element of finance in a country’s economy for corporate and business sectors, individuals, and even for the Government itself. 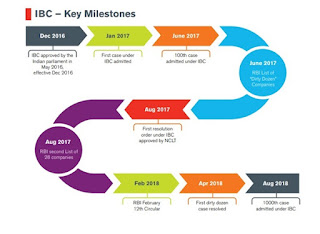 No sector or individual possesses enough resources to accomplish everything in their work or business. So they borrow funds from others to expand and modernize their business and make a contract to repay the principal amount along with the interest within a limited period of time. If the individual or organization fails to meet their financial obligations, then they are termed as insolvent. Countries have framed and laid down effective and efficient laws to handle such situations.
This blog will discuss the meaning and reason for insolvency and then proceed to the laws stipulated in India to deal with the insolvency situations.

WHAT ARE INSOLVENCY AND BANKRUPTCY?

Before the British had left India, the insolvency and bankruptcy issues were firmly dealt with by the common law traditions. After India got its independence, two major frameworks dealt with corporate insolvency and bankruptcy: Industrial Development and Regulation Act, 1951 and the Companies Act, 1956. The matters under both these laws were allocated to the High Courts. But many issues were faced under these laws such as insufficient time for the completion of legal proceedings, incompetent official liquidator, inadequate information about the business or the organization, and technology.

After 1956, many acts were enacted like the Sick Industrial Companies (Special Provisions) Act, 1985, the Recovery of Debts Due to Banks and Financial Institutions Act, 1993, the Securitization and Reconstruction of Financial Assets and Enforcement of Security Interest Act, 2002 (SARFAESI ACT) and the Companies Act, 2013. However, these legislations were unsystematic and there was an absence of a well-organized mechanism for the closure or reorganizing of infeasible firms. Various insolvency procedures resulted in an array of proceedings leading to delay in resolutions, which deteriorated the value recovery by creditors.

It was felt that having so many procedures under various laws resulted in overlapping in some provisions and hence confusion, inefficiency, and contradiction were created. All these factors demanded a single law that would deal with all the insolvency and bankruptcy cases under a single parasol and make the legal procedure systematic, time-bound, and increase value maximization. This resulted in the enactment of the “Insolvency and Bankruptcy Code, 2016”.

In 2014, a proposal for the Insolvency and Bankruptcy Code (hereinafter referred to as “the Code”) was made by the Bankruptcy Legislative Reforms Committee, under the guidance of T.K. Viswanathan[i], the Chairman of the Committee. The Committee submitted its report to the Finance Minister on November 4, 2015. The report consisted of two parts: Volume 1- rationale and designs for legislation, and Volume 2- Draft of Insolvency and Bankruptcy Code. The Committee laid down the objectives behind the Code in its report. They were to resolve insolvency with:-
(i) Lesser time involved,
(ii) Lesser loss in recovery, and
(iii) Higher level of debt financing across instruments.

The Code was finally notified in the Gazette of India in May 2016. The Lok Sabha passed the Insolvency and Bankruptcy Code on 5th May 2016 and the Rajya Sabha passed it on 11th May 2016. The Code got its assent from the President on 28th May 2016 [2]. The Code was enacted to merge the existing laws relating to insolvency and bankruptcy and to provide a single legal process to deal with all the cases of insolvency.

OBJECTIVE OF THE CODE

The Code is enacted to consolidate and amend the laws relating to reorganization and insolvency resolution of corporate persons, partnership firms, and individuals in a time-bound manner for maximization of value of assets of such persons, to promote entrepreneurship, availability of credit, and balance the interests of all the stakeholders including alteration in the order of priority of payment of Government dues to establish an Insolvency and Bankruptcy Board of India, and for matters connected therewith or incidental thereto. [1]
In simple words, the act has been framed to achieve the following objectives:
· Ensure the easy and trouble-free legal process for the cases related to insolvency and bankruptcy.
· Stimulate Entrepreneurship by availing easy credit in the market.
· To resolve the cases within a rational period of time.
· Get rid of the confusion and complications created by the existing legal frameworks.
· Make sure that the creditors and investors are protected as well as provide support for the development of the credit markets.
· Upgrade the ease of doing business by facilitating more investments.
· Improve and develop the economy of the country.

The novel corona-virus, “Covid-19”, has proved to be a hazardous menace of the 21st century. Many people were infected by it and destructions were caused all around the world. To prevent the spread of this disease, many countries imposed lockdowns, including Indi. This ultimately hampered the economy and finance of the country. Business, corporate sectors, and factories were temporarily closed, resulting in a decrease in the cash flow in the market. This led to the rise in the non-performing assets, causing delays and defaults in the payments to the banks, creditors and financial organisations.

The Government of India, in order to secure the interests of the corporate debtors and to prevent committing defaults to their debt obligation, promulgated the Insolvency and Bankruptcy (Ordinance) Code, 2020. The President of India promulgated the Ordinance on 5th June 2020, in pursuance of the economic measures announced by the Ministry of Finance. This step was taken to support the Indian business and economy which was hugely affected by the outbreak of the Covid-19.

The Ordinance was replaced by the Insolvency and Bankruptcy Code (Second Amendment) Bill, 2020, passed by the Rajya Sabha on 19th September 2020. The Bill inserted Section 10A[ii], which reads as:

“Notwithstanding anything contained in Sections 7, 9, and 10, no application for initiation of corporate insolvency resolution process of a corporate debtor shall be filed, for any default arising on or after 25th March 2020, for a period of six months or such further period, not exceeding one year from such date, as may be notified in this behalf. Provided that no application shall ever be filed for initiation of corporate insolvency process of a corporate debtor for the said default occurring during the said period.

Explanation – For the removal of doubts, it is hereby clarified that the provisions of this section shall not apply to any default committed under the said sections before 25th March 2020.”

Another major amendment made in the Code was the increase in the amount from 1 lakh to 1 crore as the minimum threshold for insolvency. This amendment was made by the Insolvency and Bankruptcy Board, in a notification issued on 24th March 2020. The Finance and Corporate Affairs Minister, Nirmala Sitharam, made it clear that insolvency proceedings which were against corporate defaults before March 25, shall continue and the Bill would not be applicable in those cases.

Failure of business is a part and parcel of the market economy. And it’s important to provide a sensible and organized solution to deal with such failures. In order to provide a speedy and efficient mechanism to resolve the cases of insolvency, India enacted the Insolvency and Bankruptcy Code, 2016, which has proved to be a huge success in today’s situation. But during this on-going pandemic, it becomes the duty of the nation to protect its corporate sectors, which are facing drastic loss due to the Covid-19. So the Government has taken a marvelous step to protect those who are unable to meet their ends in time. There are also chances of misuse of such provisions. But it’s worth taking a risk if the people who will be saved by this great opportunity are on the higher side than the people who might misuse it.