The first case of novel coronavirus COVID-19 in India was detected on 30 January 2020. Due to its contagious nature with no promising cure unlimited health care facilities along with a large population, the only precaution that the Indian government could have taken for its containments was to implement a nationwide lock down. On 25th March 2020, India declared a nationwide lock down for 21 days. 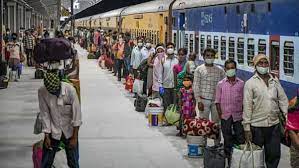 It was extended till 31 May 2020 in various phases. Although this initiative has helped the government to reduce the spread of the disease and stop community level transmission, it hampered the economic condition, this leading to the economic crisis for industries, businesses and people belonging to various societal strata. It has adversely affected the member of the lower section of the society, particularly the internal or within country migrant workers.

The sudden outbreak of pandemic COVID-19 has shown much faultiness in the contemporary world, from totally paralyzing that tourism sector, disrupting the supply chain of the interconnected global market to forcing a story thing and reprioritize our security concerns. The pandemic has posed unprecedented economic challenges for governments across the world with some sectors becoming more and more vulnerable to this pandemic. The condition of migrant laborers in India during lock down has shown fault line not only in the economic but in the society too. India the second highest populated country on the planet rising and emerging respectively, were witnessing impressive growth rate for decades are suddenly faced with our decline in their gross domestic product GDP.

The decline in the economic growth rate and directly impacts all sector of economy. However, the informal sector was first to be hard hit by the strike lock down and quarantine measures to control the virus. India still developing largely dependent on the migrant laborers for industrial and construction workers. The pandemic has worsened the condition of migrants in India. It has also put the severe challenge to poverty dictation programs and increasing income of farmers in country.[i]

Migration of huge number of Labor

The issue of migrant labor suffering caught the eyes of urban India for the first time on 28 March 2020, where the whole nation witnessed 1000 of helpless migrant workers standing in a long queue of approximately 3 kilometer in front of Anand vihar bus terminal desperate to catch the bus to reach to their native place. As the days passed, the country witnessed more heart wrenching images and news of the migrant workers working 100 of kilometer to reach their home across state borders. However the question that many members of the previous class have asked is the reason for this mass exodus particularly when the government was providing them food and other essential items.

Loss of food and hunger

Migrant workers were probably group across India worst hit by the lock down, facing widespread starvation. During the lock down 100% of those surveyed had lost their jobs, with worker being out of work of 38 days on average during March and April when the survey was conducted. This directly result in hunger 92% of workers reported that they had cut down their daily expenses. Their daily food consumption took the greatest hit. The instances of work loss and hunger was not a momentary phenomenon for the workers in the city but repeat of crises precipitated by demonetization in 2014. The migrant workers class, which largely depends on their daily earning, had literally nothing to fall back on. A survey of 11,159 migrant workers by the standard workers Action Network 2020 report that only 72% of migrant workers had their rations in storage for the next 2 days. 96% reported that they have not received any ration from the government agencies will stop. If we take a look at the available cash with them, approximately 70% migrant workers had only 200 to 300 for the remaining days in the lock down. Also 89% workers reported that they had not been paid by their employers. Furthermore, the migrants are unable to return to their native place due to the interruption to the public transportation system.[ii]

Most migrant workers come from socially marginalized communities, and this forms the basis of their insecurity in the cities. Workers and urban Labor markets are divided on the basis of caste and gender in the cities, which determines what kinds of jobs they are able to access. For instance those who work as chefs or cooks in city such as Ahmedabad and Surat typically non Dalit or non-trivial migrant workers, whereas dishwashing is exclusively for Adivasi migrant workers. Dishwashing work is generally considered and skilled and less dignified because it involves cleaning. On the other hand, cooking is a highly skilled profession looked upon as are respectable professional means only for the upper caste and class groups. It is seldom or never allotted to Dalit original workers. This is just one example of the cast hierarchies that influence the division of Labor in the informal economy. Migrant workers involved in manual daily wages work are traditional exposed to bonded Labor. Which is forced Labor in lieu of debt, and other forms of modern slavery. The protection mechanism vary drastically across the country. Places that are historical sources of migrant Labor are forced to develop production like worker registration and licensing of Labor contractors. That remain largely opaque.[iii]

Lack of faith in the political system

Without any support from employers or the state, migrant workers in the cities were compiled to take loan in cash or kind in order to meet minimum consumption requirements. Almost 48% of workers surveyed had made borrowings, with the amount ranging from rupees 600 to rupees 9000 further, about 30% of the workers reported that payments for work done prior to lock down remain stuck with their employers. They had no means of reclaiming this. The non-payment of wages and rising indebtedness pushes them into a trap of chronic, irreversible poverty. Given the irregular access to jobs add income loss, worker force to take multiple loans at high interest rate for their immediate survivor. This weakness their bargaining power and eventually puts them into a predicament of constant indebtness. The migrant worker class does not trust the system, and they are also very well are aware about that the privilege do not care about them. However, the lock down situation has exposed this insensitivity towards them in a barbaric manner. This is it which was never there home and was ashamed of these start pictures of manually, yet again reminded them of the situation and their inevitable fate which is abundant with oddities that they have to brave on their own.

After the loss of livelihood the second most cited reason for the mass departure was forced eviction by their employers. Many stayed in the temporary settlements were depended on free accommodation by their work site. They were forced to leave immediately or face consequences. It was chaotic they had 48 hours to gather their belongings and leave with their family. The majority of the migrant workers live in squalid condition in shared rooms, often close to their work sites in temporary shelters or slums. Access to toilets and clean water is scarce these location. In other words, social distancing and washing hands routinely with soap and clean water to keep caution measures to prevent COVID-19 contraction weren’t possible for the migrant workers. The increase the vulnerability to the migrant workers in cities. Many of them had built the factories, corporate skyscrapers, and residential apartment complexes, but they did not have an assured roof over their own head. Leaving the home was not just a physical action but an uprooting.

Despite having felt alienated in cities during the lock down, many workers have chosen to come back. The survey showed that 69% of workers wanted to come back to the city again on the relaxation of the lock down by the month of June. However, a large section of migrant workers who want to return are those with a single earning member with family sizes ranging from 4 to 8 dependents. The lack of access to paid employment, other than the insecure, informal and devalued work accessible in city is, forces migrant workers to return. Despite a migrant exodus unparalleled in India’s modern history, the coronavirus lock down has not led to more inclusive urban policies that recognize and include migrants.[iv]

The pandemic has given us a graphic description of how, by not celebrating one of the most industrious and hard working class and by compromising their dignity, and life, we have failed as a society. The resentment and sense of humiliation of migrant workers, will work as a huge impediment to resume the economy. Hence, we need to start including the migrants in our mainstream society rather than maintaining their status as a secondary citizen. Migrant workers in India were leading a live where exploitation and vulnerability were the norms. The COVID-19 crisis has made their vulnerability more visible to everyone. Lacking strong worker safeguards, migrant labors cannot claim protection from the state. And the state can conveniently forget about these workers.