The medical profession is one of the noble professions, we consider doctors as equal to god. But in recent times, medical negligent has become a serious issue. Around 52 lakh medical injuries cases are filed before the courts. A very minute mistake by a doctor may lead to severe injury to the patient sometime it may also cause death. Medical negligent is a crime in India and if a doctor has acted in a negligent manner, he would be liable for his own act. This act of negligent is punishable under various laws such as Consumer Protection act 1986, Indian penal code 1860, and the law of Torts. So, the current article deals with medical negligent and its consequences. 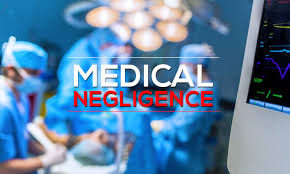 Medical negligence is misconduct on the part of a medical practitioner or doctors. Medical negligence is a combination of two words the second word indicates, a breach of duty of care. Medical negligence occurs when a doctor, surgeon, nurse, pharmacist or any other medical the practitioner acts in a negligent manner during diagnosis or performing surgery or any other improper treatment which causes injury to the patient. The Apex Court in Jacob Mathew v State of Punjab[i], explained: “Any reasonable man entering into a profession which requires a particular level of learning to be called a professional of that branch, impliedly assures the person dealing with him that the skill which he professes to possess shall be exercised with a reasonable degree of care and caution”.

The plaintiff has to prove the following essentials in the case of medical negligence:

Ø  The defendant owed a duty of care to the plaintiff.

Ø  The defendant has made a breach of that duty.

Ø  The plaintiff suffered damages as the consequences of that breach.

The doctors have certain duties towards their patients:

Ø  Duty to attend the patient.

Ø  Duty to decide as what treatment should be provided.

Ø  Duty to decide the administration of treatment.

The plaintiff can succeed only when he proves the following essentials. So, the burden of proof lies with the plaintiff. The doctor has to treat the patient with the standard of care. The standard of care denotes the appropriate treatment and procedures which should be followed by the doctor or medical practitioners while providing the treatment to the patients. If the doctor deviates from the recognized standard of care in the treatment of the patient, he will be held liable for his actions. In the case of Poonam Verma vs Ashwin Patel and Ors[ii], a doctor was registered as a medical practitioner and entitled to practice only under homoeopathy but he suggested some allopathic medicine to his patients in which he does not have much knowledge as the result of this the patient died and the doctor held liable to pay compensation for the wife of the deceased.

The doctor will not be held liable if the risk was not foreseen and the treatment for the patient was done in utmost good faith. In the case of Kusum Sharma vs Batra Hospital,[iii]the Supreme Court held that when a doctor adopts a procedure of treatment which involves higher risk only for the sake of recovering the patient from his suffering, but if the doctor does not succeed in his action, he may not be liable for his actions.

The Latin maxim “Res Ipsa Loquitur” means “the things speak for itself”. In the case of medical negligence, Res Ipsa Loquitur plays a vital role. The doctrine itself assumes the standard of care provided by the doctors.

The liability arises when the patient suffers some injury because of the negligent act of the doctor. The doctor will be held liable for his own acts. Sometimes the doctor or hospital management will be vicariously liable for the acts of their employees. For example, when a junior doctor operates on behalf of his senior and commit a negligent act which causes injury to the patient, the senior the doctor will be vicariously liable for the acts of his junior. There are two types of liability for medical negligence:

Medical negligence is covered under the Consumer Protection Act, 1986. As per the said act a consumer is defined as a“person who buys any goods or hires a service”. So, a patient hires a service from a doctor as the CPA has jurisdiction to trial medical negligence cases.The supreme court in its landmark decision in Indian Medical Association vs V.P Shantha and others[iv], held that patient who is aggrieved by any deficiency in treatment, from both government and private hospital are entitled to seek damages under the Consumer Protection Act, 1986. The followings points were discussed in the case:

Ø  Service rendered to the patient by a medical practitioner by a way of consultation, diagnosis, treatment, and surgical would fall within the ambit of “service” as defined in section 2 (1) of the Consumer Protection Act, 1986.

Ø  Medical services rendered for free of charge will not come under the purview of said act. The service rendered by a doctor under contract for personal service will not be covered by the Consumer Protection Act, 1986. The hospital and doctors cannot claim as a free charge when the expenses have been borne by the insurance company. The position has emerged in various cases concerning medical negligence is being discussed hereunder:

In the case of Nihal Kaur vs Director P.G.I,[v]scissors were left in the patient body during operation. Then his condition becomes worsened and he died. The compensation of Rs.1,20,000 was awarded to the plaintiff. From the above case, it can be clearly understood that a negligent act has been taken place.

In some cases, medical negligence can come under the purview of criminal law. When the doctor or hospital management has committed a rash act which causes injury or death to the patient will be liable under Section 304 of the Indian Penal Code, 1860 as it states when a person commits a negligent or rash act which results in the death of the person will be punished with imprisonment of two years or with fine or both. But in criminal law, it is essential to prove the motive and intention of the doctor. The negligence under criminal law depends on the degree or amount of negligence. Further, in the case of Dr Suresh Gupta[vi]it was held that, when the negligent was so gross and the act was reckless which result in a danger to the life of the patient, the criminal law will enforce.

In recent times, the medical negligence cases are increasing day by day in our country. In the month of July 2020, an elder man from Bihar was suffering from breathing issues was kept in the Covid-19 ward of a government hospital in Bhagalpur along with the confirmed COVID patients. But the elder person was not affected by COVID. The COVID virus is infectious in nature. It is clear that hospital management has acted in a negligent manner.

An incident took place in Assam on August 1st 2020, where four people died because the doctor did not attend them in time and mismanagement of the medical system in Jorhat medical college and hospital. It is the duty of the doctor to attend the patients and recover them the sufferings.

“To err is human” every person makes a mistake. No one in this world is perfect but medicine is the noblest profession which needs more patience and skills. Many doctors, even the experts do some small mistakes which can be avoided. Many issues may complicate or negatively affect the doctor-patient relationship if not taken properly into consideration.