Media is often considered one among the pillars of democracy. The media plays a really crucial role in shaping the opinion of the people about an occasion, and it also can change the attitude of the society. Constitution of India gives freedom of ‘Speech and Expression’ under Article 19 (1) (a) to Media and to the Citizens of India to express their views and opinions about anything but there are reasonable restrictions which are also imposed by constitution. 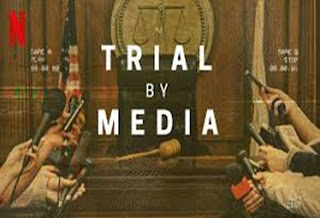 In today’s world ‘Privacy’ is one of the major concern and Media often violates that right of people for their professional gains like raising TRP and for ‘Monetary purposes’ also. Due to that they sensationalize the difficulty. Every person who is accused in any given case deserves ‘Fair trial’ which has been guaranteed under the Constitution. Media sometimes not only give their “Opinions and Facts” rather they just potray that particular person as a “Criminal” without any solid proof. This action can harm person’s life and also defame their public image. There are many examples where the media has given its verdict before any honorable court giving its verdict and that sound completely unfair. And that can be called as “Media Trial.”
Media Trial can create an impact on the mind of individual and that can lead to the whole society at large and that can worsen the situation. They try to manipulate the people on large scale using their resources and that can ruin the character of the parties regardless of what decision given by the Court. This matter is very serious and that is why it needs to be addressed as soon as possible.

As we have seen the practice of today’s media they often take case on their hands do the investigation and then declare the accused as “Habitual Offender” and ruin their image and that to without sufficient evidence. Recent trends of Media is that they only focuses on Certain Big cases and then they gave their “Bias Verdict” without thinking how it will affect the families of the person or any other consequences. They only think about their monetary gains and violates the right which is given to them. There are many not so famous cases that not came into the limelight of the Media and person proved innocent.

The Jessica Lal case, 2010, The Priyadarshini Mattoo case, 2006 and Bijal Joshi rape case, 2005 all of these cases we have seen outrage and numerous opinions of Media and eventually which led to the change of decision given by court. Media is pillar of democracy, they here to show us what the truth is but there are limits which they can’t cross but by “Media Trial” they are crossing the limits. No doubt Media has helped in many cases where justice was given to the victim because of media took action and spread the awareness about the particular fact but that does not mean that they can just give their verdict about someone.

In India Media has a very large role to play whenever we need change in particular sector and media help us to do so easily. As discussed above Media trials have mostly cons because it’s very harmful for the accused and their family. It can destroy their careers merely by stating the fact that they were accused, even when court has not given any judgment related to that matter.
In the case of “Express Newspapers (Bombay) (P) Ltd. V UOI” the Supreme Court stated that “freedom of the press is that the heart of social and political intercourse. Also in the case of R Rajagopalan v. the State of TN the Court stated that this right extends to cases where public figures, public events, and issues are involved but a balance should be maintained between public events and personal lives of individuals.

There is always a conflict between “A fair trial and freedom of Press.” We can observe as a layman that both the concepts have an effect on people. Liberty of press is given to ‘Media’ under democracy to maintain the balance and to uphold the justice. A media trial is something where the reporters talks continuously about the same topic and same person on the basis of their little knowledge about the case. They have their own theories and they make people to believe that this is the truth. It’s going to influence the opinion of the court also after all judges are also human being and they also watch news. It is basic human nature to believe something if it comes to your knowledge continuously. And due to that “It can affect the judgment of the court also which is against the principle of Fair Trial.”

Constitution of India very well give rights to an individual to have a fair trial without any prejudice under Article 14, 20, 21 and therefore the media has no authority to take away their rights of fair trial by any means. When late Shri Ram Jethmalani decided to defend Manu Sharma he also faced the criticism from the media was immense, and it had been stated that he was trying to defend the indefensible.

Same things we can witnessed in “MOST FAMOUS Sushant Singh Rajput CASE” where Media trial is affecting Ria chakraborty’s life and telling people that she is the culprit without any official authority to do that. And there is a rule that “No one is a criminal until proven guilty by court.” Media Trial is breaking that rule and that’s not at all acceptable. There is a tendency that if in certain case judge gives the judgment in favor of the accused which media already presents as criminal they show the public that judge was biased and corrupt, they can’t tolerate any verdict against media trial which is so wrong.

“International Covenant on Civil and Political rights, 1966 under that Article 19 states that each person has the proper to freedom of speech.” However this right of freedom of press is always subject to some duties and responsibilities. In case of Hamdard Dawakhana v UOI [ 1960 (2) SCR 671] it had been stated by the Court this right includes the proper to realize information and knowledge about matters that are of common interest. The Supreme Court has also stated that an attempt by media is opposite of the rule of law. But because the media is one among the foremost pillars of the democracy, their freedom can’t be curtailed, but are often restricted to a particular point. Balance should be maintained between the liberty of Press and therefore the rule of law.

The Hon’ble Supreme Court has also stated that the media should be independent and free; Media can’t come in a way of Justice and exercise their freedom in such a way that it’s prejudicial to the proceedings and people. Problem is not that Media is exposing the wrongdoer or their actions that is completely right and media must do it but the matter arises when they transcend the rights conferred to them. It’s always upto media how to potray certain news and how it can benefit the society at large.

Establishment of ‘Press Council of India’ has been a big influence on the very fact that it’s regulated the facility of the press to stop it from publishing prejudiced content. The content which media shows or represent before the citizens remains under the control and anything which is contrary to the law, will come under the ambit of contempt. Provision of punishment is also there to regulate the press and whoever violates this basic code of contempt of the court. And all of these are mentioned under the ‘Contempt of courts act, 1971’ so whenever there are problem relating to any content they can be punished under this act.

From above mentioned facts we can say that the media is truly fourth pillar of our democracy which operates for the greater interest of society, but the procedure of law and the interest of people in any matter shouldn’t be hindered by it. Courts in India are very well capable of to give justice to people and that they must be allowed to function without spreading any prejudice within the popular opinion. The right to a free and fair trial under Article 21 must be upheld.
Media is here to make us aware about the situation in the world and nation and our locality just facts and not the theories of their own that might curtail the right and image of the accused. And when media channels have been controlled by the govt isn’t good for democracy. In Democracy everyone has a right to give their opinion but when it comes to affecting their personal space and privacy restriction must be there. Therefore, media trials have only served to assist the people in just only a few instances but that doesn’t happen altogether the cases, thus it’s necessary to possess restrictions imposed thereon.