Live in relationships invites society to pay more attention. Moral judgements always follow when it comes to personal life decisions. But, the truth is that there is no right or wrong way to live in a democratic establishment until it can cause harm to another person. There was a time when the option to “live-in” with a life partner was was equivalent to “living in sin” but today not everyone can comply with the strict imposition of marriage. 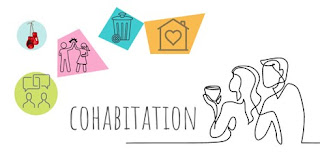 A long term live in relationship can bring with it all the confinement of a marriage, even without the ritualistic solemnization of the relationship in custom and usage. The law subsist to protect our rights and interests. So, although living in is not equivalent to a marriage, Indian legislators have taken a very positive and firm step forward in providing legal protection to those involved in a live in relationships without being married.

WHAT CONSTITUTES A LIVE-IN RELATIONSHIP?

A live in relation or cohabitation, is an arrangement in which two people agree to stay together permanently or on long term foundation in a sexually and/or emotionally intimate relationship. Basically, a live-in relationship means that unmarried couples choose to stay under the identical roof. Although such live-in relationships are quite the normal in the Western World, our country is still getting used to this way of life. There are parts of the country especially in the urban cosmopolitan parts where such association is becoming more common but overall in India, this manner of life is scorned upon as a complete taboo.

There are numerous reasons for why couples choose to cohabitate without marriage. For instance, some people have their own private reasons to sense that pros of choosing to live in with a partner before taking the plunge into marriage, if at all, far outweighs the cons. By dwelling in with someone it is simple to assess compatibility and work around matters such as financial decisions and other responsibilities in a realistic way. Further, it is much easier for non-recognised relationships consisting of LGBT couples to live in than to marry.

DIFFERENCE BETWEEN MARRIAGE AND LIVE – IN RELATIONSHIP

Marriage is a more legal and ethically-accepted form of relationship between couples. There is a social validation that has its own attraction and satisfaction. However, live-in relationships are the brand new and on-going trends among the youth that offers them the liberty to live with their partners without any pressure of organized marriages. Both of these socially-built establishments of love and relationships have their pros and cons.
In context of the Indian society, living with a person before marriage is still treated as a taboo, especially in a man-woman relationship. It denotes to the concept of virginity, specifically of a women, which is pondered as violated, if and when she engages in a physical relationship with a man before her marriage. She is then seen as someone impure or unholy, which is a conventional concept thought but extensively accepted. This is why a live-in relationship is highly criticized through the society.

LIVE – IN RELATIONSHIP AND LAW IN INDIA

Section 125 CRPC was incorporated in order to avoid homelessness and destitution for a wife/minor, children/old age parents, and the same has now been expanded by judicial interpretation to companions of a live-in relationship.

Basically, it expresses that if a woman has been in a live-in relationship for a particular period of time, she ought to have the valid privileges as that of a spouse and can declare maintenance under Section 125 CRPC. Where partners reside together as husband and wife, a boldness would come up in favour of wedlock.

As per the Domestic Violence Act, 2005, section 2(f):
Domestic relationship means a relationship between men and women who live or have, at any factor of time, lived together in a shared household, when they are associated by consanguinity, marriage, or through a relation in the purview of marriage, or are family members residing together as a joint family. The law has mentioned live-in relationships by providing rights and safety to those females who aren’t legally married, however are rather are residing with a male individual in a relationship, which is in the idea of marriage, additionally comparable to wife, but not equal to wife.

The court may additionally presume the existence of any fact which it thinks likely to have happened, regard being given to the common course of natural events, human behavior and public and personal business, in a relation as to the facts of the particular case. Therefore, where a man and a lady reside together respectively for extended time as a couple then there could be an assumption of marriage.

RIGHTS OF PARTNERS IN LIVE – IN RELATION

Following are few rights in favor of partners in live-in relationship:

The woman’s right to parental property is blanketed by the Hindu Succession Act, 1956, after it was amended in 2005. This offers her the identical rights as a son to ancestral and self-received property, regardless of her marital status. So, whether or not she is married, or unmarried or in a live-in relationship, the right to ancestral property will accrue to her via ways of means of birth, while the self-acquired property will be distributed as in line with the will.

The right of maintenance is accessible to wives underneath all personal laws in India. However, not even single religion recognises and accept live-in relationships. Since no treatment is granted to women concerned in a live-in relationship, Indian Courts have widened the scope of maintenance under the Criminal Procedure Code. Therefore, Section 125 of the Criminal Procedure Code has been supplied to give a proper legal right of maintenance to lady partners in or out of a marriage.

· Legitimacy and inheritance rights of children

Inheritance rights of children are listed in Section 16 of the Hindu Marriage Act, where the legal status of legitimacy is supplied even to illegitimate children only for the motive of inheritance. Therefore, inheritance rights have been allowed to children born out of a live-in relationship. These rights are accessible in both ancestral and self-bought properties.

· Children out of marriage

Partners living together for a long term may also have kids together. However, live-in couples are not allowed to adopt children as per the Guidelines Governing the Adoption of Children as notified by the Central Adoption Resource Authority. In case of dispute with respect to custody of the child, the partner may also seek advice from a Child Custody Lawyer.

· Custody and maintenance rights of children

The arrangement on the maintenance rights of children out of marriage differs in personal marriage laws. For example, under the Hindu Law the father has to maintain the child, whereas under the Muslim Law the father has been absolved of such an obligation. Nonetheless under Section 125 of the Criminal Procedure Code, remedy is available for children who are unable to claim maintenance under personal law.

DEATH OF A PARTNER

Inheritance: When any one of the partner passes away, the other partner may no longer mechanically inherit anything. There are restrictions on the provisions the departed partner could have made in his/her will.
Inheritance tax: If the departed partner leaves anything in their will, the other partner does not have access to the beneficial tax rates offered to close relations in most cantons.
Widow/widower’s pension: Unmarried companions do not receive any widow/widower’s pension from the old-age and survivor’s coverage or accident insurance.
Many pension schemes only offer a restricted right to a survivor’s pension to unmarried partners.