The Legislature, Executive, Judiciary, and then Media are considered to be the four pillars of Indian Democracy. Media has given equal importance as to the other pillars because it is the pillar of a democratic setup. As through the medium of Mass media ideas across societies are communicated; these ideas open the mind of the people and show the mirror to the society. India has the constitutional right to freedom of speech and expression along with the freedom of press under the clause 19(1) (a) and the limitations to its absolute freedom are stated in its very next clause. 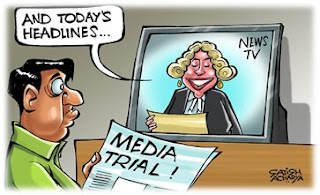 From the ink of its pen to the sound of its mic, Media can build and malign an image of a person simultaneously. In fact, it can change the governments! A free media is a prerequisite to democracy. [i]When any popular and sensational criminal case filed in the court, there arises a sudden curiosity in the public about the accused, and victim, about the case, and the guilty. Using the thirst for sensational news, Media, including TV Channels, Newspapers, News Websites, etc. start publishing their own version of the facts and give the public a very different perception to look into the case. It is being called investigative journalism.

Trial by Media can be described as the impact of television and newspaper coverage on a person’s reputation by creating a widespread perception of guilt or innocence before, or after, a verdict in a court of law.[ii] Adjudication by media in cases before or after the verdict of court has become a trend in the present scenario to increase the circulation and TRP of newspapers and news channels.[iii] The media has forgotten to differentiate between the accused and the actual criminal. Various judges have criticized trial by media as it leads to psychological variation while giving any order or decree. Yes, Judges do get influenced by the media. Judge is also a human being these things can influence the verdict. Media has been termed as a magic bullet that directly hits the mind of the people.

This is the reality of today’s media. Media is considered as the fourth pillar of democracy. It is said that due to a reason, there is a responsibility of the media to stick with the facts and give their audience a piece of authentic and untampered news. But today, the media has forgotten his responsibility and got blind in the sudden upsurge of TRP (Television Rating Point). They fall to any extent to increase their TRP. They clearly contaminate the legal maxim of “Innocent until Proven Guilty” on which our court, judges, and judiciary believe. They give their judgment before the judge of the court.
I want to draw your attention to one such recent case of Sushant Singh Rajput.
It was prima facie registered that Sushant Singh has committed suicide. But later on after the FIR against his girlfriend Rhea Chakraborty was filed accusing her to be the murderer of Sushant Singh. Now the court proceeding is going on and CBI is still investigating to reach the bottom of the case and find out the culprit. But on the other hand, Media has already Considered her to be guilty of the murder of Sushant. it is totally against the rule of law which says everyone is entitled to be treated innocent unless he/she is shown to be guilty.

Rhea Chakraborty is an actress and does acting for her livelihood. She is a public figure. but because of this media trial, she was very disgraced. The public which once supporting and accepting her as an actress now went against her and not ready to accept her as a human being. I’m not at all supporting any person but I’m showing the impact of media trial on the accused person. I do not know whether she is guilty or not but if she found innocent in this case still she will not be able to live as before. Her acting career is just destroyed. The public is very angry with her and she will not for sure be able to get that reputation back. This is what a media can do with the one who is yet not proven guilty.

There is one more such example of unfair trial by media in which a woman Jasleen Kaur of Delhi, India posted the photo of the man named Sarvjeet Singh on Facebook and accused him of the sexual harassment. The post went viral. After that, the media started their not so needed job and labeled that man with the names like ‘pervert’ and ‘the predator of Delhi’. Four years later, Sarvjeet Singh was held innocent by Delhi Court and was acquitted of all the charges. During this time, the man had lost his job and could not find any other source of income for his livelihood just because of an unfair trial by the media. [iv]

In the recent infamous Khurshid Anwar case, a news agency (India TV) labeled Mr. Anwar as a rapist based on an unsubstantiated victim’s account, which resulted in him committing suicide.
There are many such cases where the media shifted from their actual job and started playing the role of Judiciary. There is the race of TRP going on among the various news channels but the media need to understand that this race can be the question of life & death for the person who has been experiencing it, who has become a scapegoat for the media to win the race of TRP.

There is a huge impact of media over the public. Now it depends on the media only to give the public the right way to think about any person or case. Media is bold! Media is a callous reality! Media is change! Media is exposing scams! I do not against media because it has done its best by exposing the true culprit who had proven innocent by the corrupts & when the evidence was tempered in the court premises. The media has played a great role in the cases of Priyadarshini Mattu’s case, the Jessica Lal case, the Tehelka case, and many other cases. I instead criticized that part of media where they declare someone guilty without knowing the credibility of the information and the adverse effect of the media trial on the person’s reputation.

Media should understand that they cover the people at large and their little mistake regarding someone’s character and their slightest remark towards someone can make their life hell. Media should maintain its code of laws and ethics, social responsibility, and credibility by not interfering in the matters of court so early. There should be no publicity and no assumption at all should be made when a matter gets seized by the police except rightful reporting and what’s actually happening.

The legal process not at all be hindered by the media. Courts are the right forums for taking the decisions and they must be allowed to function without spreading prejudice in the public opinion. [v]Everyone has the right to a free and fair trial under Article 21 and it must be upheld.