Media is the wonderful invention of this age that has commanded the recognition as an agent of socialization. Media is the medium in this technology enhanced century. In this period where everything is available over gadgets, media is the biggest influencer. When such mediums or platforms are given this importance, there falls an implied responsibility over them to supply useful, constructive and truthful information to the people of society. It becomes the sole responsibility of entertainers to protect the decency and morality of the country but this platform has been used wrongly. 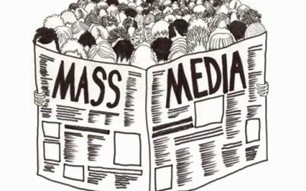 It is using this wide platform to promote obscenity besides promoting awareness against one or against any prominent crimes prevailing in society. Hence, this article enhances the views where media has been irresponsible in abiding by its responsibilities with the depiction of laws in India to regulate the same.

MEANING OF OBSCENITY AND MASS MEDIA

Obscenity is a kind of mind pollution which affects the society at large. It can be defined as acts, photographs or any such videos which derive towards immorality and decency. Morality and decency are important aspects of Indian culture rather India is mostly known for its great culture, heritage, tradition, morality and decency. Obscenity whereas is something which corrupts the minds of individuals and urge them towards sexuality or nudity. Most of the times, vulgarity and obscenity are used interchangeably. But vulgarity is something which provoke the feeling of disgust and boredom but do not deprave or hamper the morality or decency of individuals.

Mass media typically means TV, Radio, Press, cinema etc. and it is considered as a basic medium between people around the globe. It is media through which people know about the happenings around the world in a very short span of time. Media production and dissemination of information and entertainment programs have great impact on society. It influences the social, economic and political norms and values. Media has become so powerful that it tied together whole of the world. Media is a great source of influence for every age group be it young or older. Mostly individuals starts their day with newspapers and ends after enriching themselves with latest news. Mass media plays a significant role in forming perceptions, supplying informations, values, attitudes and behavior. Media tends to connect people and let them connect themselves with the protagonist of the show. Television or cinema has become so popular and has such a big impact that individuals tend to connect themselves and their life stories with the shows and media.

All democracies all over the world provide their media with some level of freedom of speech and expression. But, as is commonly believed with great power comes great responsibility, and like all other domains this power is abused by the media as well. Media acts as both a boon and a bane. Media is slowly losing its social accountability by giving massive amount of coverage to abnormal events and issues. The vulnerability of the content has also increased multifold as a result.[1]

Electronic media is a vast domain which includes both information and general entertainment channels. It includes advertisements and in the modern time the internet based media. Electronic media has been violating industry ethics on a fairly regular basis. News channels, too, are vulnerable and often fail to cover the correct or the most imperative events.

Media routinely sensationalizes occasions by spicing things up and in the process even violates security. Obscenity is one such issue of crucial significance tormenting the country, which the media neglects to cure and conveniently disregards. Obscenity is one of the reasons which ought to preferably be motivation to deny content from being screened. Obscenity in India is characterized as “offensive to modesty or decency; prurient, flithy and ghastly.”

For years, cinema, Bollywood movies have always been a bigger source of entertainment for people. Through movies, people tend to enjoy their leisure time or entertain themselves and many times even connect themselves to the actor or actresses and tries to imitate them be it in looks or something else. With the change in our cinema, screenplay, acting and everything else over the last century, there is one thing that been consistent and prominent, it is the obscenity in the films. Although technically speaking, even that has increased drastically, there is no improvement to this area of Bollywood as there is to others like writing, direction etc.[2] A little show of skin works, it makes sense, but the way this industry objectifies women, actresses in what is often called critically acclaimed movies and item numbers is the cause of concern.

INDECENT PORTRAYAL OF WOMEN BY MEDIA:-

Women have been depicted in the most respectable and aesthetic manner on the one hand and, on the other, they have also been victims of indecent, vulgar and obscene depiction. It is observed that in recent time media is representing women in an indecent way. Media has emerged as a major exploiter of women. It is seen to flout all norms relating to obscenity, decency and morality. There is a systematic overdose of nudity and vulgarity. In the media industry, women are treated as goods to promote sales. Women and their concerns or problems are no longer visible in mass media, there has been increasing commodification of women in mass media. Many games and gaming websites in India include content which may be categorized as objectionable under the pornographic and obscenity laws of India. For instance, some of the popular websites offer games which have animated caricatures of human beings, including women, depicted in a manner which may be construed as an offence as per the moral standards of India. Ritu Tawde, BJP corporator hit the headlines by proposing a ban on all mannequins displayed in the shops and showrooms in Mumbai. She said displaying a women’s body for commercial use is wrong. When people watch a film or log the internet, it is their conscious choice. Unlike in this case where people of all ages have no escape but gaze at the scantily clad mannequins displayed on the streets.

· Article 19 provides the freedom of speech and expression. Media is the biggest example of enjoying this freedom. Not only the human nature but it is the demand of the society in order to be a civilized society that the State should impose certain reasonable restrictions on this particular guaranteed Constitutional right and that restriction has been provided under Article 19(2). One of the limitations imposed on such freedom is “decency and morality”. As conferred earlier that obscenity is defined as against decency and morality. Therefore, obscene acts shall be prohibited as against such restrictions imposed under Indian Constitution.

· Sections 292–294 of the Indian Penal Code- These sections make the sale, exhibition and circulation of obscene books and objects, and the performance of obscene acts or songs in public places. “Obscenity” is defined as being lascivious or appealing to the pruri­ent interest or having the effect of tending to deprave and corrupt the reader or viewer.

· Section 3(c) of the Dramatic Performances Act, 1876- This section empowers the State Government to prohibit the public performance of any play or drama that is in its opinion likely to deprave and corrupt persons present at the performance.

· Section 67 of the Information Technology Act, 2000- This section prohibits the transmission or publication of obscene material in the electronic form.

· Section 95 of the Code of Criminal Procedure, 1973- This section authorises the State Government to seize copies of books and newspapers containing matter, the publication of which is punishable, inter alia, under sections 292 and 293 of the IPC.

Ranjit Udeshi v. State of Maharashtra, AIR 1965 SC 881 (Supreme Court of India)- The appellant, a bookseller, was convicted under s. 292, Indian Penal Code for selling an unexpurgated edition of “Lady Chatterley’s Lover”. In his appeal to the Supreme Court he contended that the section was void because it violated the freedom of speech and expression guaranteed by Art. 19(1)(a) of the Constitution of India. Dismissing the appeal, the court held that the section embodied a reasonable restriction upon the freedom of speech and expression under Article 19(2) as it sought to promote public decency and morality. It upheld the application of the Hicklin test to determine what constituted obscene content.

Samaresh Bose v. AmalMitra, (1985) 4 SCC 289 (Supreme Court of India)- In this case, the Court distinguished mere “vulgarity” from obscenity, holding that vulgar writings were not necessarily obscene. The Court observed, “Vulgarity arouses a feeling of disgust and revulsion and also boredom but does not have the effect of depraving, debasing and corrupting the morals of any reader of the novel, whereas obscenity has the tendency to deprave and corrupt those whose minds are open to such immoral influences.”

AveekSarkar v. State of West Bengal, Unreported, 2014 (Supreme Court of India)- The appellant, the editor of a newspaper, was sought to be prosecuted for publishing a nude photograph in the context of an anti-racism campaign. Quashing the prosecution, the Court held that nudity per se would not be obscene and pictures would have to be examined in the context in which they were published. Applying the test of community standards, the Court also observed that the photograph in question could not be suggested to deprave minds or be designed to excite sexual passion in persons who are likely to look at it.

We cannot be mute spectators to any indecency against anyone and especially against women. Any decency or immorality not only hampers the young minds but also have grave effects on their growth. It also poses bigger threats on Indian culture and heritage. Media is an agent to alarm policy makers to give immediate attention to gender related problems such as the adverse sex ratio, infant and maternal mortality, crime against women, gender violence, acid attack, dowry related problems, problems of the girl child, women labour problems, effects of poverty on women and their families. Unfortunately such coverage is very less in compared to the space covered by cinema, actresses, models, advertisements, glamour, beauty aids, cookery and fashion. A strong legislative effort coupled with a wide spread social awareness with morality and ethics is needed to fight this menace so that women are not perceived as a commodity but as individual with right and dignity.