India- The land of festivals, traditions, rituals and values. Mostly people use these type of terms in a very sarcastic way but those great and sacred rituals and traditions are much more than the thinking of some in fact most of the people of today’s world. We cannot deny the fact that it is the land of many great scholars whose skills and knowledge was not bounded within the boundaries of their own country only and one of the best examples of this was the saint Guru and Monk “Bodi Dharma”. 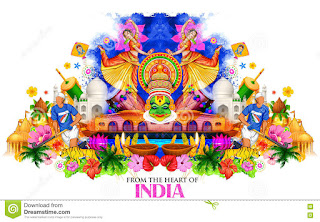 Our customs, traditions and ethical values which people generally call old and Orthodox, were the reasons why, once our nation was the richest and strongest of all and the disbelief of people in their own culture is the reason that, Now we are struggling as a developing country. Our sacred and holy scriptures, their contents are not just for creating mythological stories. They are the roots of our civilization, it is very shameful for us that, now mostly people call them stupid, old, Orthodox mythological stories. But, when you will go through them, you will get to know that from one of the richest economies, why we became so much dependent on others for everything. The reason is that we don’t believe in our own roots, potential, ethics, values, in short we don’t believe in our own culture.

We all are aware of the current situation of this COVID-19 Pandemic, the whole planet is suffering. In this situation also we can see that even though we are Second most populous country in the world and the number of corona patients is also increasing day by day at a high rate in India but our immunity system has proved that we are much more stronger than others with a good recovery rate. Any guesses, why is it so? It’s because our life style, our food that we eat, the spices and herbs such as turmeric powder and many others, these are a great immunity boosters. Mostly people from other countries make fun of Indian food because it is full of spices and herbs, but very few of them know the fact that these are the foods and ingredients which makes the Indian people and their immunity so strong that we can even fight with a global pandemic while showing a good recovery rate. There is a common and basic Indian manner to greet someone that we call “Namaste” with folding our hands without doing any physical contact with next person. As of now, the whole world is doing Namaste instead of hand shaking or hugging, which according to them is a so called modern and civilized way for greeting people but they are forced to do Namaste as to protect themselves from the current spreadable corona infection. They are forced to follow the Indian culture whether it is for boosting immunity System or to protect themselves from the infection. It is very well known that we Indians make so much use of water for washing, cleaning and sanitizing each and everything and these habits use to be so funny and stupid for the people from different countries of different cultures because it was not mandatory for them to clean and sanitize everything, they don’t even sanitize themselves after using a washroom because that is not their culture and they use to believe that their culture, their life style, their way living is the best and they are educated and smart enough to call us, our beliefs and traditions silly, old and Orthodox. But not now, because they who use laugh on us are sanitizing their hands and stuffs at least ten times a day.

The question arises is that, why? , why our scholars, saints, Gurus, Scriptures such as “Vedas” and “Bhagwatgeetha” have told us to follow these rules, traditions and all those customs. I think the world knows the answer now, behind every teachings, there is scientific reason to do them. If someone will seriously go through those teaching and belief, he/she will get to know that our culture is much more advance than any other according to science. The reason behind to do Namaste instead of shaking hands was to protect ourselves from getting into a contact with germs and infections, the reason behind our food being a mixture of spices and herbs was to make our body and immunity strong and capable of fighting any disease, The reason behind touching feet of elders to greet them is because the only part of humans body releases the largest amount of positive energy and good vibes is the feet and when we touch them, we grab that energy into ourselves. Recently, Sanskrit which we also call the mother of all languages in india has been selected by NASA as the best language for computer programming. Our all holy scriptures and books were written in Sanskrit language millions of years ago. There are so many examples which can prove the fact that our culture and traditions are much more advance, modern and scientific than others.One should just know about, what is the Indian Culture actually and he/she will fall in love with it because there is no culture who is more advance and modern than this.