There can be no doubt that a Hindu marriage is a religious ceremony. According to all the texts it is a samskaram or sacrament. It is binding for life because the marriage rite completed by saptapadi or the walking of seven steps before the consecrated fire creates a religious tie, and a religious tie when once created, cannot be untied. It is not a mere contract in which a consenting mind is indispensable. The person married may be a minor or even of unsound mind, and yet, if the marriage rite is duly solemnized, there is a valid marriage. 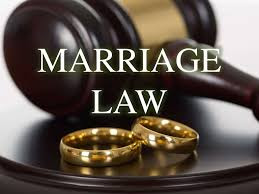 Grounds of a proper and valid marriage under Hindu marriage Act, 1955

Lily Thomas vs UOI, AIR 2000 SC 1650. A Hindu wife was filing a complaint for the offense under section 494, IPC on the ground of bigamous marriage. Husband was marrying other women in subsisting of the first marriage.

Ceremonies of Hindu hold a greater importance in hindu marriages. A Hindu marriage may be solemnized in accordance with the customary rites and ceremonies of either party thereto. Where such rites and ceremonies include the saptpadi (that is, the taking of seven steps by the bridegroom and the bride jointly before the sacred fire), the marriage becomes complete and binding when the seventh step is taken and becomes good and valid in law.

A marriage becomes voidable when it is in contravention to section 5 clause 2, when either of the party is incapable of giving consent due to unsoundness of mind or due to mental disorder. If a marriage has been forced then also it becomes voidable on the part of the party who has been forced to marry provided that the petition has been filed within one year of marriage to dispose of the marriage. Meaning, no petition for annulling a marriage the petitioner has, with his or her full consent, lived with the other party to the marriage as husband or wife after the force had ceased to operate or, as the case may be, the fraud had been discovered. A marriage is also voidable if it can be proven that the wife was pregnant at the time of marriage by another man.
Main ingredient being the CONSENT to marry, plays a major role in constituting a marriage valid and not null/void.

It is very important to have a consent to a marriage. One cannot force or impose marriage on someone. There must be consent or agreement between the parties of the union to be married. For consent to exist, both parties must agree to the marriage and there must be no mistake as to the nature of the marriage; no force must be used upon either party to enter into the union. Consent doesn’t necessarily have to be verbal, acting upon a particular situation may also constitute to be a valid consent provided that it has been freely given. Consent by fraud, misrepresentation, coercion will not be free and valid consent.
In Babui Panmato Kuer Vs Ram Agya Singh {AIR 1968 PATNA 190}, it was held that when misrepresentation as to the age of the bridegroom made to the mother who acted as agent and the daughter consented for marriage believing the statement to be true, the consent was held to be vitiated by fraud.
In Rajinder Singh Vs Smt Pomilla {AIR 1987 DELHI 285}, the Division Bench of the Delhi High Court found the marriage to be 13 liable to be annulled when it was found that the husband had not disclosed the factum of his previous marriage to the wife or her relatives at the time of seeking her consent for marriage and thus the said consent was obtained by fraud as to the material fact or circumstance.
Therefore a marriage becomes voidable, under the Hindu Marriage Act, when the consent of the petitioner, or where the consent of the guardian in marriage of the petitioner, the consent of such guardian was obtained by force or by fraud as to the nature of the ceremony or as to any material fact or circumstance concerning the respondent.

The essentials of Muslim marriage are very much similar to that of a Civil Contract. A muslim marriage nothing more than a contract, seven rounds and mangalsutra are not the essentials of a valid marriage.
Proposal and Acceptance – proposal is referred to as ‘ijab’ and acceptance of the same as ‘qubul’. A proposal has to be made by one party and the other party is to accept the proposal. Unlike civil contract, here, proposal and acceptance has to be made at the same time, while performing the ceremonies.
Competency – both the parties should be competent to propose and accept the marriage, they should major and of sound mind and muslims at the same time.
Soundness of Mind – ofcourse a very important point to know, soundness of mind. To give free consent a person should be stable. A person of unsound mind has no capacity to enter into a contract and in the eyes of law his consent will be considered as no consent.
Free Consent – For a valid marriage free consent of the parties is a must. If the consent is obtained by means of coercion, fraud or mistake of fact, it is considered as invalid and the marriage is considered as void.

Religion is a very sensitive and personal aspect of an individual’s life. Our constitution guarantees the free conscience and religion to people of all denominations. a person is free to profess any faith or relinquish his faith of birth and convert to another religion. Validity of a marriage ceases to exist immediately after conversion, again every marriage is governed by different personal laws. Under Hindu Marriage Act, Section 13 clause 1(iii) says,

“Any marriage solemnized, whether before or after the commencement of this Act, may on a petition presented by either the husband or the wife, be dissolved by a decree of divorce on the ground that the other party has ceased to be a Hindu by conversion to another religion.”

A conversion becomes a ground for immediate dissolution of marriage and for judicial separation also. In Hindu Law a marriage can be solemnised between two hindus only. If a hindu man who has converted as christian and a christian lady in a hindu form is not a valid marriage; M. Vijayakumari v K. Devabalan, AIR 2003 363.

Under Muslim Law the renunciation of Islam by a married woman or her conversion to other faith shall not by itself dissolve her marriage: —
“The renunciation of Islam by a married Muslim woman or her conversion to faith other than Islam shall not by itself operate to dissolve her marriage. Provided that after such renunciation, or conversion, the woman shall be entitled to obtain a decree for the dissolution of her marriage on any of the grounds mentioned in section 2 of Dissolution of Muslim Marriages Act, 1939. Further this shall not apply to a woman converted to Islam from some other faith who re-embraces her former faith.”

Sarla Mudgal vs. Union of India 1995 AIR 1531, “The apex court held that the man is trying to invade the first marriage and leave the wife stranded. Thereby, held that since according to the Hindu Marriage Act, 1955, a man under its provisions cannot have two marriages at a time. It was held by the court that the second marriage shall be held void since the first marriage has not dissolved and the conversion which has taken place only to commit fraud and to marry two women at the same time shall hold no good. The conversion shall not be affected but the second marriage shall be void. Hence the second marriage after conversion was held to be invalid after converting from Hindu to Islam. ”