As per the Kafala System, a migrant worker’s immigration status is legally bound to an individual employer or sponsor (Kafeel) for their sponsor period. In this case, a migrant worker cannot enter the country, transfer employment nor leave the country for any reason without first obtaining the explicit written permission from kafeel. Additionally, the worker must be sponsored by his kafeel to enter the destination country and remains tied to this kafeel throughout his stay in that country[i]. 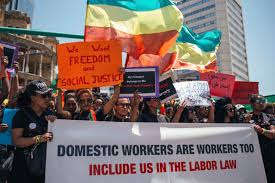 Oftenly Kafeels use this system to abuse the migrant workers by exerting further control over them. Kafeels confiscate their passports and travel documents, despite legislation in some destination countries declares this practice as illegal. The power that the kafala system delegates to a sponsor over a migrant worker can be termed as a contemporary form of slavery. This system creates an environment ripe for human rights violations and erosion of labor standards. The author through this article aims to shed some light on the background and current developments of the Kafala system in the global scenario. The author will also discuss this system under the umbrella of International law. Finally, the author will conclude by giving his outlook.

The kafala system began in the 1950s when several middle east countries started hiring foreign workers to accelerate development following the discovery of oil. This system was formulated to regulate the relationship between employees and migrant workers. This system is now established as a common practice in the Gulf Cooperation Council (GCC) countries such as Bahrain, Kuwait, Oman, Saudi Arabia, UAE (United Arab Emirates), etc. This system was formulated keeping in mind an economic objective i.e. to provide temporary, rotating labor that could be rapidly bought into the country in an economic boom and expelled during the less affluent periods[ii].

Changes and Developments in the global scenario:-

There has been an overwhelming condemnation of the Kafala System. Several international organizations and civil societies have demanded to abolish this system and replace it with an alternate labor migration governance policy but as of now, all the GCC countries lack the political will to abolish this system. The extent of the reform that should be sought remains under debate often underpinned by the fear that advocating for a comprehensive reform of the Kafala system will lead destination countries to seek workers from alternate countries. Several destination countries have made reforms in this system like:
· Jordan introduced a standard contract in 2003 and included domestic workers under its labor law in 2008. In 2009 Jordan also passed a law against people trafficking that criminalizes forced labor for exploitation[iii].
· Istanbul introduced a Unified standard contract in 2009[iv].
· Oman introduced a Law in 2003 making it illegal to loan workers to other employers[v].
· United Arab Emirates (UAE) introduced a wage protection system in 2009. Abu Dhabi Department of Justice plans to create a court specialized in looking into cases involving domestic workers[vi]

Some Major Reforms: In Several GCC countries, major reforms have been introduced to end the Kafala System.

A worker’s rights related to the just and favorable condition of work is protected under the spectrum of International Human Rights. As per article 7[x] of the International Convention on economic, social, and cultural rights, everyone has a right to the enjoyment of just and favorable conditions at the workplace. Under the kafala system, a migrant worker is humiliated till his death which is a transgression of his right under this article. International Labor Organization (ILO) in article 1(b)[xi] its convention no. 105 which focuses on abolition of forced labor prohibits the use of a forced or compulsory labor as a method of mobilizing and using labor for purposes of economic development. Not giving the appropriate legal protection to the migrant workers is a gross violation of ILO’s Convention no. 111[xii] and International Convention on the elimination of all forms of racial discrimination (CERD)[xiii] as it amounts to discrimination.

Conclusively, the author wants to strongly condemn the kafala system as it grossly transgresses the basic human rights of an individual. This problem will not be solved by small changes but a major reform is the need of the hour. The mandatory sponsorship system for the migrant workers should be abolished as it is very arbitrary. Countries should take away the power of the employers which empowers them to secure and renew migrant worker’s residency and cancel it anytime. Migrant workers should not be required to acquire the consent of their employers before leaving and changing jobs. All the GCC countries should take every necessary and reasonable step to end this anathema as every human being including the migrant workers, who can’t even afford the basic amenities have some basic human rights guaranteed under several international conventions and they shouldn’t be abridged from these rights.