The nation was outraged by the very recent case of a 19 year old Dalit girl who was allegedly raped by four upper caste men. The incident infamously came to be known as Hathras rape case. The victim had given consistent statements to the police, the doctor at Jawaharlal Nehru Medical College, Aligarh Muslim University, during her examination for sexual assault and also before the Magistrate. Yet, the affidavit filed by the Uttar Pradesh Government before the Supreme Court has claimed that the girl was not raped and has substantiated the same with the report of the Department of Forensic Medicine, Jawaharlal Nehru Medical College. This article seeks to analyse the validity of the forensic report and whether such report can have an overriding effect on the oral evidence of the victim. 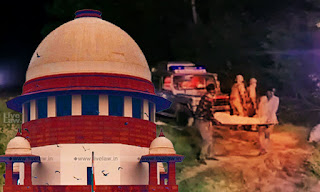 The incident occurred on September 14, 2020 at around 9:30 am when the victim and her mother were fetching fodder in their field. The FIR was lodged under Section 307 of the IPC (Attempt to murder) at the Chandapa Police Station of Hathras district. As per the affidavit of the UP Government, the victim’s first statement was recorded by the police on September 19 under Section 161 of the Code of Criminal Procedure, in which the victim accused one, Sandeep, of molesting her. Later, on September 22, she gave her second statement to the police in which she accused 4 men- Sandeep Singh, Ramu Singh, Luvkush Singh and Ravi Singh- of raping her. She claimed of not being fully conscious when her first statement was recorded. In her second statement to the police, she said, “when my mother and I had gone to fetch fodder, then Sandeep, Ramu, Luvkush and Ravi of my village have committed rape on me. Sandeep then strangulated me with my dupatta.”

The initial report, i.e., the Medico-Legal Examination Certificate (MLC), stated that she suffered neck injuries which confirmed the victim’s accusation of being strangulated. After her second statement was recorded, she was examined for rape under Section 164 of CrPC.

The “Sexual Assault Forensic Examination Report” that was issued on September 22 confirmed “complete penetration of the vaginal orifice by penis”, although all blanks regarding ejaculation of semen are stated as “DNK (Do Not Know)” since the victim was unconscious during the time.
The report also mentioned that “UV examination of the body was not done because body (was) wiped several times.” According to the provisional opinion of the MLC:-

“On the basis of local examination, I am of the opinion that there are signs of use of force however opinion regarding penetrative intercourse is reserved pending availability of FSL report”
The report of the Forensic Science Laboratory, Agra (FSL) however did not detect any semen or sperm cells in the sample which was subsequently cited by the UP Police to rule out the alleged rape in spite of the victim’s statements.

Validity of the FSL

The FSL report which came on September 25 confirmed absence of semen from the vaginal swab. It is important to note that, the vaginal swab was collected on September 22, that is, 8 days after the incidence of alleged rape. It is a biological fact that sperm cells stay alive for not more than 2-3 days outside the body, i.e., after ejaculation (unless stored in optimum conditions). The reports also mentioned that the victim’s body was wiped several times, her vaginal areas washed and undergarments were changed at the time of admission to the hospital.

The delay in collection of samples makes the FSL report an unreliable foundation to adjudge the occurrence of rape. Further, ejaculation or presence of semen is not a prerequisite to establish rape.[1] The definition provided in Section 375 of the Indian Penal Code states that slightest penetration of the vagina or any orifice by the penis or any object against the will and consent of the woman is enough to establish the offence of rape.

The Chief Medical Officer of the Aligarh Muslim University has remarked that the FSL report referred to by the UP Police “holds no value” since “government guidelines strictly say forensic evidence can only be found up to 96 hours after the incident. This report can’t confirm rape in this incident”[2] and in the present case the primary sample which was used for the FSL was collected much later than 96 hours.

The President of the Resident Doctors’ Association at the Jawaharlal Nehru Medical College added to the criticism and called the FSL report to be “unreliable”. According to him,
“How will the FSL team find evidence of rape 11 days later? Sperm doesn’t survive after 2-3 days. They took samples from hair, clothes, nail bed and vaginal-anal orifice; the samples may not show presence of semen because of urination, defecation and menstruation”[3]

In the present case, the victim’s statements are in the nature of dying declarations. Her statements before the police, doctor and the magistrate were consistent regarding the gang rape committed on her by 4 men. Multiple dying declarations are admissible in Court provided that they are consistent and reflect certain regularity in the facts.[4] The Indian law does not require actual apprehension of death at the time giving a statement regarding any facts of the crime, provided such crime actually leads to the death of the declarant. As such, the statements of the victim qualify as dying declarations within the ambit of Section 32 (1) of the Indian Evidence Act.

In Kushal Rao v. State of Bombay[5], the Apex Court held that, “It cannot be laid down as an absolute rule of law that a dying declaration cannot form the sole basis of the conviction unless it is corroborated”. This stance was reiterated in U.P v. Ram Sagar Yadav[6] and in Harbans Singh v. State of Punjab[7] where it was held that a consistent dying declaration made by one of competent mind is enough for conviction if found truthful in court.

It is indeed an established theory in law of evidence that oral evidence will have an overriding effect on forensic report/ medical evidence in event of a disparity between the two, since medical evidence has more of an expert opinion and thus has corroborative value under Section 45 of the Indian Evidence Act.

Thus given the consistent dying declarations corroborated by the autopsy reports and the delay in collection of vaginal swab, which makes the FSL report highly unreliable, the FSL report which has been cited to substantiate the Police’s stand of non-occurrence of rape does not seem to triumph the consistency of oral evidence in the Hathras rape case.