The pandemic which has gripped us as for a very long time now looks like a matter affecting us since time immemorial. So far one can recall, he/she would most probably only remember living in solitary confinement , In fear of a raging virus, devoid of all normalcies of life. 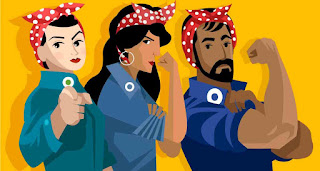 “A world full of empowered women isn’t one where men are marginalized, It’s a world where Everyone thrives”. –

With such gruesome events becoming part of the daily life , anyone can easily accept that the day-to-day functioning’s performed in view of the pandemic would soon turn into customs and the natural way of life. In the midst of this unforeseen chaos, it has not surprising to see the old evils become obsolete in discussion or become issues of little importance. On the darker side, some evils might even become more severe and rampant in the absence of legal and social welfare system.

Exploitation of women is of the most burning issues that has gained momentous attention in the past months of lockdown. Historically, women and young girls have been subjected to harsh discrimination and abuse by at their homes in the society. They have been perpetually belittled, agonized and made victims of patriarchal dominance much before the lockdown, and their situation has only worsened in recent time – in the wake of unemployment, hunger, debt-redness , poverty and unreasonable restrictions imposed upon them caused to the draconian pandemic fallout. With the gender gap widening within the four walls of toxic masculinity , it might be long before the perceived second gender get to breathe a sigh of relief from this menace.

Spike in exploitation and abuse

With the ongoing pandemic situation stalking anyone ho dares to venture out of his/her shelter, families and communities have regrouped into very close-knit social circles. With male members of the house facing sit-outs and dearth of occupational occupancy, the modesty of the females members are a vulnerable target. In a study by National Family Health Survey, it was deduced that almost 31% of married women and faced severe domestic violence by the hands of their husbands, while a reasonable majority of the unmarried facing abuse from any know of their family – step-father, brother , relatives etc. Generally the ethos of home-sickness are responsible for inducing emotions of anger, frustration , anxiety etc. among the senior members , which results in such abuse and exploitation of females. It doesn’t come as a surprise that cases of domestic abuse have increased in all developing countries, with India’s tally doubling during this period .

The lower sub-strata of the economical class is the worst hit due to this stereotype crisis. A large proportion of this gender-inequality issue can be delegated to the socio-economic and educational situation of females members belonging to lower social-strata families.The unempowered and uninformed state of these women preclude them from approaching authorities in the matter of their plight , hence such domestic atrocities usually go unreported. Another big boulder created in the path of grievance redressal for women facing such exploitation is the interim suspension of the legal machinery, teemed with delayed police and government response to provide adequate aid to such women.Hence the pleas of female abuse and exploitation would only become more discernible.

The aspects of pandemic and subsequent lockdown are meant to affect everyone equally. However, In the case of women , certain societal figments have more radicle views towards freedom of women. We all might face such scenarios in our families, where the female members are not given adequate liberty to make choices, move freely or even voice their opinions. In a figurative as well as literal sense , girls are given much less choices than boys are in under similar circumstances. In the lockdown, men may be allowed to venture out of the house, but women are barred from doing so.

They are assertively made to look after the family, complete chores, cook etc., while men do nothing significant but laze and enjoy their homely services. These dynamics of domestic life have ,for long, been unfavorable to women, and they are only making matter worse for them. The burden of female literacy rate was already a topic of grave concern which has been aggravated by the COVID situation. According to National Commission for Protection of Child Rights (NCPCR), about 35% of girls in the age group of 15-18 are not attending any educational institutions, and since learning at school and colleges has been effectively shifted to online platform, many such young women and girls might miss-out on their studies due to the tandem of domestic responsivities and lack of support for e-learning by the family members.
Another very prominent hindrance to restrictions imposed on women is the desolation of outside environment caused due to the lockdown. The streets are more deserted, public transport is running emptier etc. , all these characters accentuate an unsafe environment for women to work in . Recently, when liquors shops were rushed by frenzied alcoholics in the middle of the lockdown, various instances came out from certain areas of Mumbai and Delhi where women complained of being molested and harassed by alcoholics when they stepped out to buy groceries and ration at the same time. Besides, the empty public places places have become naturally turned into squares of encroachment by homeless people, hobos and petty criminals, all -in -all forcing families to restrict movement of the women of their family at late hours; while the male members are free to commute to their workplace without any scruples.

In the continuance of the pandemic and lockdown situation, unemployment and wage cuts are imperative. With less disposable income and no corresponding reduction in prices, most families are left to fend on whatever meagre savings they would have amassed. With men earning less and family income dwindling, the impact on the homemaker would be serious too. Since a large number of working women from poor and below BPL families depend on menial jobs and manual labour for their sustenance, their interests have been severely hit by the reluctance of employers to keep them on duty -whether it be not letting females work in factories or denying them entry house where they earlier used to serve as domestic help.

The pandemic has laid bare this face of economic vulnerability more inclined towards women than men. Women are paid much less as compared to their male counterparts and lose their jobs much easily, since most of the female workers are engaged in non-technical sectors. This disproportionate scenario makes them impervious to innumerable social and domestic evils as they are left with meagre sources to run the household,especially widowed ,divorced or separated females. Adding to the their plight, the upcoming era of post-covid work ecosystem, women may be significantly disadvantaged due to lesser expertise and access in the field of digital learning, work from home etc.
Image Source
Author: Akshit Gupta